Black Friday is off to a quiet start at some stores in Canada, with fewer pre-dawn lineups that once epitomized the spending event.

Retailers have increasingly stretched deals over several weeks and offered similar discounts online, taking some of the urgency out of the early morning shopping trips.

Retail analyst Bruce Winder says this “dilution” of Black Friday has spread promotions out over a longer period with many retailers offering the same discount over an entire week or more.

He says a Toronto-area retail strip mall showed little early morning activity, with only a few people gathered outside a Walmart before it opened at 6 a.m.

Winder says the parking lot of a local Best Buy — once the epicentre of pre-dawn Black Friday crowds as consumers sought deep discounts on electronics — was quiet a little over an hour before its 8 a.m. opening.

Still, he says overall Black Friday sales will likely be strong, with shopping malls expected to become crowded later in the morning.

This report by The Canadian Press was first published Nov. 25, 2022. 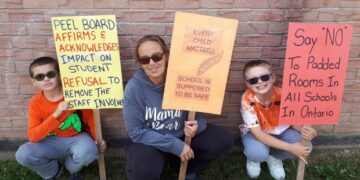 You can hear the discomfort in Margaret Hodgson’s voice as she describes “the room” she says her son was placed...

Report: At least 32 transgender people killed in US in 2022

Manitoba considers move to permanent daylight time, but there are conditions

More than 3,300 Hamilton homes without power due to two outages