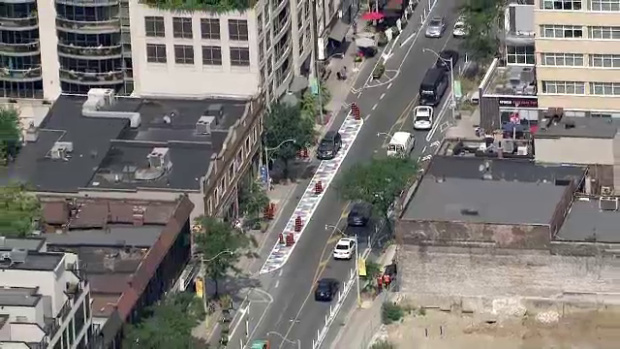 If you are driving north on Yonge Street, you may have noticed that travelling between Bloor Street and Davisville Avenue is now taking longer.

That stretch of road is currently part of the city’s ActiveTO Midtown Complete Street Pilot, and new data released on Friday show how vehicle travel times have slowed since the program began.

According to the data, vehicle travel times in September were 70 seconds longer for northbound traffic during the weekday afternoon peak period compared to pre-pandemic travel times in the fall of 2019.

As a result, the average time to drive north on Yonge Street between Bloor Street and Davisville Avenue is now 9.8 minutes.

The city said it did not see any spillover travel time impacts on the parallel corridors of Avenue and Mount Pleasant Roads.

In August, vehicle volumes along Yonge Street ranged from 7,200 at Bloor Street to 17,200 at Davisville Avenue.

“The observed changes have happened against a backdrop of gradually increasing congestion levels city-wide from period of COVID-19 restrictions in the winter and Spring of 2021 to the gradual re-opening of businesses, services and gatherings through the summer and Fall of 2021 and beyond,” the city said. 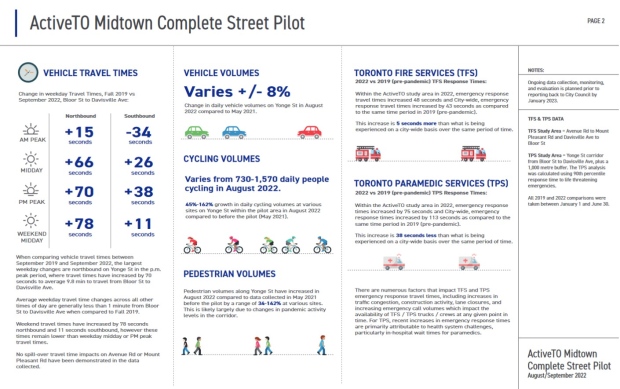 The pilot, which was approved by city council in April 2021, saw the installation of CafeTO patios, dedicated bike lanes and other streetscape improvements as part of its pandemic mobility recovery strategy.

While vehicle travel times have slowed, the area has seen strong growth in pedestrians and cyclists since the pilot began.

According to the data, daily cycling volumes in August (adjusted for weather and seasonality) were between 45 and 162 per cent higher in August compared to pre-pilot in May 2021.

Daily pedestrian volumes were 34 to 142 per cent higher in August compared to before the program. The city said the number could be attributed to the loosening of COVID restrictions.

“Staff will continue to monitor travel times for vehicles during the pilot, and will identify and implement opportunities for where possible,” the city said.

Staff are expected to report back to the infrastructure and environment committee in January 2023 with additional data, evaluation and recommendations.

A muted Black Friday for Canadians amid inflation, online shopping and longer deals

A muted Black Friday for Canadians amid inflation, online shopping and longer deals

Russia, shaken by Ukrainian strike, could step up drone use

KYIV, Ukraine (AP) — Emergency crews on Tuesday sifted through the rubble of a building struck by Ukrainian rockets, killing...