Justice Minister David Lametti repeatedly invoked solicitor-client privilege on Wednesday as he refused to reveal how the Liberal government ultimately decided to invoke the Emergencies Act earlier this year.

That leaves a key question unanswered: Weeks into last winter’s “Freedom Convoy” protests, what legal advice did the federal government rely on to invoke the act for the first time since its passage in 1988?

In his testimony at the Public Order Emergencies Commission, Lametti confirmed that he raised the idea of using the Emergencies Act only one day after thousands of protesters officially kicked off the “Freedom Convoy” demonstration in Ottawa Jan. 29.

The confirmation came after the inquiry was shown text messages between the justice minister and his chief of staff on Jan. 30 in which the former mentioned the Emergencies Act.

Lametti testified that he did so because he knew if the government decided the act was needed, there would have to be consultation and discussions about whether the standards had been met — and he wanted the Department of Justice to prepare for the possibility.

“I knew that we had to begin thinking about it, whether or not it was ever going to be an option,” Lametti said, adding that the department had undergone the same process to evaluate the Emergencies Act as a possible tool to address the COVID-19 pandemic.

“The worst scenario would be something explodes, and we are not ready to use it because we haven’t done the kinds of consultations necessary, or asked the appropriate questions to the appropriate people in order to get it done. So this is me being prudent.”

The inquiry also heard that the justice minister also mused early in the crisis about possibly sending in the Canadian Armed Forces, and dismissed former Ottawa police chief Peter Sloly as being “incompetent” in handling the situation.

Yet Lametti, who also serves attorney general, the government’s top legal adviser, would not offer any insight into the process by which Liberal cabinet ministers determined the act was necessary to restore order in the capital and at several border crossings with the U.S.

“That pushes me into an area where I can’t really answer the question without infringing on solicitor-client privilege,” he said at one point while being questioned by commission lawyer Gordon Cameron. “So you’re putting me in an awkward position.”

Even before Lametti began his testimony, government lawyer Andrea Gonsalves had told the commission that the Liberal government would not waive its right to solicitor-client privilege, which protects legal advice from being publicly revealed.

Lametti explained during his testimony that solicitor-client privilege “is not mine to waive,” and the decision would instead be up to the governor-in-council. He later added: “I would, in probably virtually all cases, advise that it shouldn’t be waived, simply because it is such an important fundamental principle.”

Lametti was the first of three high-profile cabinet ministers expected to appear Wednesday at the Public Order Emergency Commission, which is holding its final days of hearings after more than five weeks of testimony.

The documents submitted into evidence include private text message conversations between ministers. On Wednesday, the commission was shown a text exchange between Lametti and Public Safety Minister Marco Mendicino on Feb. 2.

“You need to get the police to move,” Lametti wrote. “And the (Canadian Armed Forces) if necessary. Too many people are being seriously adversely impacted by what is an occupation. I am getting out as soon as I can.”

He went on to tell Mendicino that people were looking to them for leadership — “and not stupid people.”

Mendicino responded: “How many tanks are you asking for?” Lametti replied, “I reckon one will do.”

Two days later, in another text to Mendicino, Lametti called then-Ottawa police chief Peter Sloly incompetent. Asked about that statement, Lametti admitted to the inquiry that he had felt frustrated.

“It reflects, I think, the fact that my life had been altered by this,” he said. He also said the messages included banter and occasional attempts at bad humour. 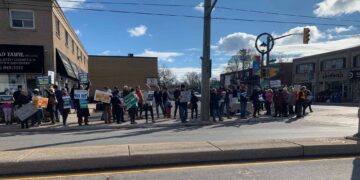 Some 300 Oakville residents made their voices heard Friday (Nov. 25) over the province’s Bill 23 and the development of...