The European Parliament’s web site came under a cyberattack by a pro-Moscow group only hours after lawmakers overwhelmingly backed a resolution calling Russia a state sponsor of terrorism, the legislature’s president said Wednesday.

President Roberta Metsola said in a twitter statement that the parliament “is under a sophisticated cyberattack” and that a “pro-Kremlin group has claimed responsibility.”

The legislature’s spokesman Jaume Duch said that the website “is currently impacted from outside due to high levels of external network traffic.” He added that “this traffic is related to a DDOS attack (Distributed Denial of Service) event.”

In distributed denial of service attacks, the instigators render web sites unreachable by bombarding them with junk data packets. DDoS attacks do not damage networks because they do not penetrate them. But they can be a major nuisance, especially when targeting sites the public depends on for vital information and services.

Metsola said that the EU’s “IT experts are pushing back against it & protecting our systems.”

She note that it came “after we proclaimed Russia as a State-sponsor of terrorism.”

In a lopsided 494-58 vote with 48 abstentions, the EU legislature sought to increase pressure on Moscow to bring anyone responsible for war crimes committed from the Feb. 24 start of the invasion before an international court.

The 27-nation EU has condemned in the harshest terms the invasion and repeatedly said that several Russian actions over the past 9 months have amounted to war crimes.

Sometimes, state-backed hackers have used DDoS attacks as a smokescreen for more serious attacks, as occurred in Ukraine prior to Russia’s Feb. 24 invasion. But mostly they are used as a “noisy” political tool by hacktivists whose affiliations may be murky.

Citation:
European Parliament website affected by cyberattack (2022, November 23)
retrieved 23 November 2022
from https://techxplore.com/news/2022-11-european-parliament-website-affected-cyberattack.html
This document is subject to copyright. Apart from any fair dealing for the purpose of private study or research, no
part may be reproduced without the written permission. The content is provided for information purposes only.
Tags: international court
Previous Post 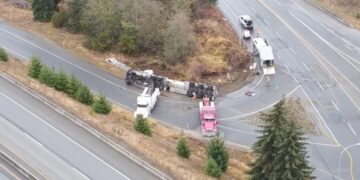 First responders set up a detour on Highway 19A near Parksville, B.C. on Thursday afternoon after a trailer truck transporting...

What provinces and territories are saying about mask mandates as COVID-19, RSV, flu cases rise