After being eliminated fourth in the latest season alongside her celeb partner Sam Champion, Burke returned for one last performance.

In an interview with ET Canada’s Keshia Chanté, she said of how she was feeling, “I’m shocked, I’m in shock I think.”

READ MORE:
Cheryl Burke Leaving ‘Dancing With The Stars’ After 26 Seasons: ‘One Of The Absolute Hardest Decisions Of My Life’


Burke insisted she thought she “nailed” the dance, adding that she could now let her departure really sink in.

She shared, “My trailer currently is like a flower shop, there has been so much love and I feel the love from everybody.

“I just haven’t been able to open up anything because I know that [there will be] tears. But, now I’m trying to really soak it all in,” insisting there had been lots of distractions.

Gushing that she loves the people on the show so much, she said of whether she’d be tuning in next year: “I’m a forever fan! This has been where I’ve grown up my whole life. I’ve been here for 17 years… I will always be a ‘Dancing with the Stars’ number one fan forever, for life.”


Burke joined the show in its second season back in 2006.

She shared an emotional post ahead of her last appearance, with the lengthy message including: “This show has been my 2nd family since I was 21 years old.

“The cast, crew & fans have seen me through my highest highs & some of my lowest lows, & I honestly don’t know who I would be today without them. I also know that it is time for me to begin the next phase of my career, although dance will always be a part of me.”

‘Hardcore’ Musk drives into a culture clash at Twitter

Opinion: What Elon Musk’s destruction of Twitter tells us about the future of social media

Opinion: What Elon Musk's destruction of Twitter tells us about the future of social media 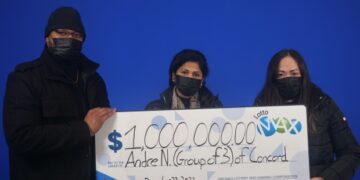 Three Toronto-area coworkers are one million dollars richer after winning the lottery. According to the Ontario Lottery and Gaming Commission...