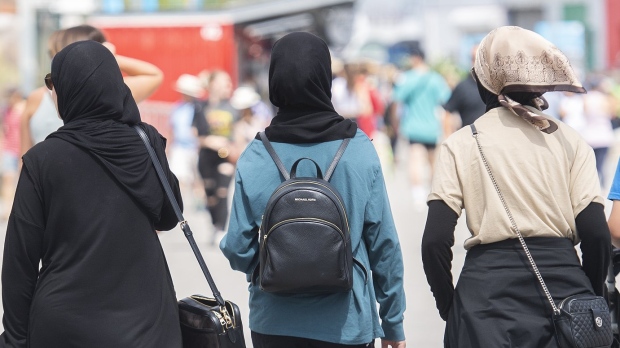 The Quebec government’s pre-emptive use in its secularism law of the notwithstanding clause — which shields legislation from challenges over violations of fundamental rights — was the centre of debate Monday before the province’s highest court.

Invoking that clause must come at a high political price, said lawyer Frédéric Bérard, who is representing a teachers union opposing Bill 21 before Quebec’s Court of Appeal. The law forbids certain public sector workers — including teachers and police officers — from wearing religious symbols on the job.

Bill 21, Bérard said, was adopted by Quebec’s legislature in order to “appease racists who do not want to see religious symbols.”

Both the Quebec government and groups opposing Bill 21 are challenging an April 2021 Superior Court decision that largely upheld the controversial legislation but struck down provisions relating to English-language school boards and a ban on face coverings for members of the provincial legislature. Seventeen separate parties are challenging the law.

The hearings began Monday with arguments against the government’s pre-emptive use of the notwithstanding clause — also known as Section 33 of the Canadian Constitution. By invoking that clause, governments can shield laws from most court challenges over violations of fundamental rights, such as freedom of expression and freedom of religion.

Bérard, who is representing Fédération autonome de l’enseignement, said a government should pay a political price every time it uses Section 33, because doing so violates a right guaranteed under the Canadian Charter of Rights and Freedoms.

Quebec Premier François Legault decided to adopt the law to please the majority of francophone Quebecers, but the Canadian and Quebec charters of rights are there to protect minorities against that kind of decision, Bérard said.

“It’s electoralism and populism .… Democracy is not the law of the majority, but that of the protection of minorities.”

The Quebec government passed Bill 21 in 2019 and has repeatedly argued the law is moderate and supported by a majority of Quebecers.

In his 2021 decision, Superior Court Justice Marc-André Blanchard said Bill 21 has “serious and negative” impacts on people who wear religious symbols but is largely legal and does not violate the Constitution. Blanchard acknowledged that the law has “cruel” and “dehumanizing” consequences for certain people, many of whom would no longer be able to seek out new jobs in the public service without compromising their beliefs.

The law, he added, “negatively impacts Muslim women first and foremost” and violates their freedom of expression and religion. But he ruled that the law was allowed to stand because of the government’s invocation of the notwithstanding clause.

Blanchard, however, struck down a portion of the law that applies to English school boards, as well as a section that banned members of the provincial legislature from wearing face coverings. The Quebec government is appealing those aspects of the ruling.

Isabelle Brunet, a lawyer representing the attorney general of Quebec, said the lower court judge did not make a mistake when he concluded that the use of Section 33 was valid.

Bill 21, Brunet said, was the product of years of debate and reflection in Quebec society. The attempts to have it invalidated “represent nothing less than a challenge to the wisdom of the state.” The right to invoke Section 33, she added, “preserves legislative sovereignty.”

Earlier on Monday, parties to the court challenge, including the Canadian Civil Liberties Association, told reporters that they would head to the Supreme Court of Canada should their appeal fail. The federal government has said it is prepared to join the legal challenge if it eventually ends up in the country’s highest court.

Ahead of COP27, young African climate activists speak out

Russia, shaken by Ukrainian strike, could step up drone use

KYIV, Ukraine (AP) — Emergency crews on Tuesday sifted through the rubble of a building struck by Ukrainian rockets, killing...