by author
in Engineering, Telecom
Reading Time: 3 mins read
0 0
A A
0
0
SHARES
13
VIEWS
Share on FacebookShare on TwitterLinkedinReddit

Scientists at the Swiss Plasma Center at EPFL, in collaboration with Beyond Gravity and with the support of the ESA, have developed a slip ring assembly that can more than triple the operational voltage of new-generation, high-voltage satellites.

The current boom in space exploration doesn’t just mean more satellites, but also upgraded ones with higher power needs and less electrical losses. This means, amongst other things, higher voltages for satellite electronics and thrusters.

To use the power generated by solar panels, satellites are equipped with a “slip ring assembly,” which is a component designed to transfer electrical power to electrical power systems such as onboard computers, traveling wave tube, data-gathering equipment, and power thrusters while rotating. The slip ring does this by using sliding electrical contacts: a rotating ring and a stationary brush—the “wiper.” As the system rotates in a satellite, the wiper slides along the ring’s surface, transferring electrical current at low voltage.

Now, researchers from the Swiss Plasma Center (SPC) of EPFL and Beyond Gravity, have successfully developed a slip ring assembly that allows higher voltages in satellites, raising the range from the current 28–100 Volts to 300–600 Volts, resulting in improved performance of the satellite and increased robustness against electrical failures.

The work was co-funded within the framework of ESA’s 4.0 ARTES (Advanced Research in TElecommunications Systems) Core Competitiveness program under the APRIOM project (Advanced sliP Ring for hIgh vOltage Mechanism), whose aim is to “develop, manufacture and test a breadboard model in a relevant environment.” In space, a breadboard model is used to verify critical functions in representative environments with a representative scale breadboard that is applicable to the final mission.

The new slip ring is the culmination of work from another project, the Horizon 2020 High Voltage Electrical Power System Architecture (HV-EPSA), in which the SPC research team, led by Professor Ivo Furno and including Dr. Fabio Avino and Dr. Alan Howling, developed an advanced mockup of their cylindrical slip ring that was manufactured by the Swiss company RUAG Space, which is the predecessor company of Beyond Gravity, located in Nyon and specialized in Slip Rings.

The SPC researchers aimed not just to meet the growing need for higher voltages in satellites, but also to overcome the challenges of operating a slip ring assembly in space, removing the risk of electrical breakdown with—namely the generation of a harmful plasma that could permanently damage the satellite.

In fact, one of the problems it has to overcome has to do with the large pressure changes that a satellite undergoes, from the atmospheric pressure at the launch to the deep vacuum of space. This has been a longstanding issue because the isolation of electrical components in satellites usually relies on vacuum conditions, in the absence of any gas pressure. Proposed solutions have so far involved increasingly complex configurations of electrical circuits that can end up getting in the way of the satellite’s function.

Another challenge is the number of turns that the ring must make per day, which, after a certain amount of time can have adverse effects on its function.

As the APRIOM project demanded, the SPC researchers provided expertise and technical support to Beyond Gravity in the new slip ring design and testing under conditions that replicate a satellite’s lifespan. The slip ring proved to function within 400-500 Volts (and 8 A) from very low pressures (10-5 mbar) to the most critical pressure values (~1 mbar), with a resulting transferred power of up to 40 kW. It maintained this output even after 25,000 turns—by comparison, a geo-stationary satellite’s slip ring assembly will perform around 11,000 turns after 30 years of operation.

“The success of this project stems from a close collaboration between academia and industry where all the partners had to closely understand each other’s needs and constraints,” says Furno. “With the new slip ring design, which will be field-tested in orbit in the upcoming years, we are paving the way for the new generation of high-power thruster satellites.”

Provided by
Ecole Polytechnique Federale de Lausanne
Citation:
Tackling the high-voltage needs of next-gen satellites (2022, November 2)
retrieved 2 November 2022
from https://techxplore.com/news/2022-11-tackling-high-voltage-next-gen-satellites.html
This document is subject to copyright. Apart from any fair dealing for the purpose of private study or research, no
part may be reproduced without the written permission. The content is provided for information purposes only.
Tags: atmospheric pressureelectrical powerpowersatellitesolar panelsspace explorationvoltage
Previous Post

Judge orders probe to investigate whether Celsius was a Ponzi

Supersonic travel, without the sonic boom 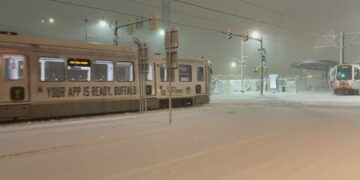 A potentially historic winter storm currently walloping Buffalo will mostly miss the GTA but some communities elsewhere in southern Ontario...

‘I felt helpless’: Mother with expired health card told to pay out of pocket for son’s visit at Scarborough hospital