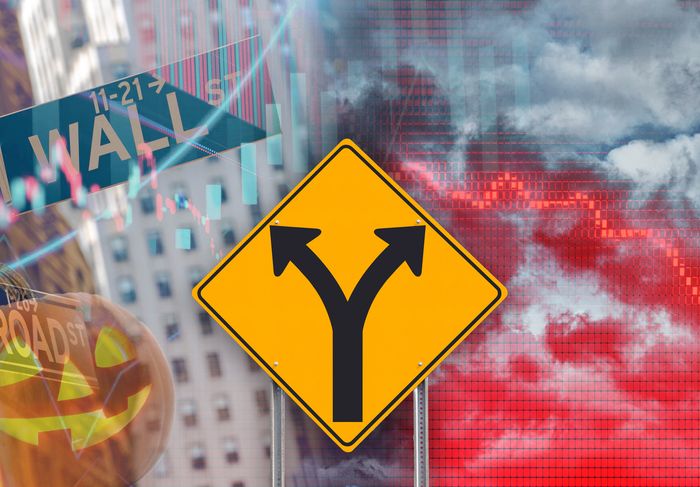 The past week offered a tale of two markets, with gains for the Dow Jones Industrial Average putting the blue-chip gauge on track for its best October on record while Big Tech heavyweights suffered a shellacking that had market veterans recalling the dot-com bust in the early 2000s.

“You have a tug of war,” said Dan Suzuki, deputy chief investment officer at Richard Bernstein Advisors LLC (RBA), in a phone interview.

For the technology sector, particularly the megacap names, earnings were a major drag on performance. For everything else, the market was short-term oversold at the same time optimism was building over expectations the Federal Reserve and other major global central banks will be less aggressive in tightening monetary policy in the future, he said.

Read: Market expectations start to shift in direction of slower pace of rate hikes by Fed

What’s telling is that the interest-rate sensitive tech sector would usually be expected to benefit from a moderation of expectations for tighter monetary policy, said Suzuki, who contends that tech stocks are likely in for a long period of underperformance versus their peers after leading the market higher over the last 12 years, a performance capped by soaring gains following the onset of COVID-19 pandemic in 2020.

RBA has been arguing that there was “a major bubble within major portions of the equity market for over a year now,” Suzuki said. “We think this is the process of the bubble deflating and we think there’s probably further to go.”

The Dow
DJIA,
+2.59%
surged nearly 830 points, or 2.6%, on Friday to end at a two-month high and log a weekly gain of more than 5%. The blue-chip gauge’s October gain was 14.4% through Friday, which would mark its strongest monthly gain since January 1976 and its biggest October rise on record if it holds through Monday’s close, according to Dow Jones Market Data.

While it was a tough week for many of Big Tech’s biggest beasts, the tech-heavy Nasdaq Composite
COMP,
+2.87%
and tech-related sectors bounced sharply on Friday. The tech-heavy Nasdaq swung to a weekly gain of more than 2%, while the S&P 500
SPX,
+2.46%
rose nearly 4% for the week.

Together, the five companies have lost a combined $3 trillion in market capitalization this year, according to Dow Jones Market Data.

Aggressive interest rate increases by the Fed and other major central banks have punished tech and other growth stocks the most this year, as their value is based on expectations for earnings and cash flow far into the future. The accompanying rise in yields on Treasurys, which are viewed as risk-free, raises the opportunity cost of holding riskier assets like stocks. And the further out those expected earnings stretch, the bigger the hit.

And now investors see an emerging risk to Big Tech earnings from an overall slowdown in economic growth, Suzuki said.

“A lot of people have the notion that these are secular growth stocks and therefore immune to the ups and downs of the overall economy — that’s not empirically true at all if you look at the history of profits for these stocks,” he said.

Tech’s outperformance during the COVID-inspired recession may have given investors a false impression, with the sector benefiting from unique circumstances that saw households and businesses become more reliant on technology at a time when incomes were surging due to fiscal stimulus from the government. In a typical slowdown, tech profits tend to be very economically sensitive, he said.

The Fed’s policy meeting will be the main event in the week ahead. While investors and economists overwhelmingly expect policy makers to deliver another supersize 75 basis point, or 0.75 percentage point, rate increase when the two-day gathering ends on Wednesday, expectations are mounting for Chairman Jerome Powell to indicate a smaller December may be on the table.

However, all three major indexes remain in bear markets, so the question for investors is whether the bounce this week will survive if Powell fails to signal a downshift in expectations for rate rises next week.

See: Another Fed jumbo rate hike is expected next week and then life gets difficult for Powell

Those expectations helped power the Dow’s big gains over the past week, alongside solid earnings from a number of components, including global economic bellwether Caterpillar Inc.
CAT,
+3.39%.

Overall, the Dow benefited because it’s “very tech-light, and it’s very heavy in energy and industrials, and those have been the winners,” Art Hogan, chief market strategist at B. Riley Wealth Management told MarketWatch’s Joseph Adinolfi on Friday. “The Dow just has more of the winners embedded in it and that has been the secret to its success.”

Meanwhile, the outperformance of the Invesco S&P 500 Equal Weight ETF
RSP,
+2.08%,
up 5.5% over the week, versus the market-cap-weighted SPDR S&P 500 ETF Trust
SPY,
+2.38%,
underscored that while tech may be vulnerable to more declines, “traditional parts of the economy, including sectors that trade at a lower valuation, are proving resilient since the broad markets bounced nearly two weeks ago,” said Tom Essaye, founder of Sevens Report Research, in a Friday note.

Suzuki said investors should remember that “bear markets always signal a change of leadership” and that means tech won’t be taking the reins when the next bull market begins.

“You can’t debate that we’ve already got a signal and the signal is telling up that next cycle not going to look anything like the last 12 years,” he said.

‘He was a strong young man’: Former Sask. Hilltops and Huskies QB loses fight with cancer

Cyclist hospitalized, intersection shut down for serious collision in Brampton

Cyclist hospitalized, intersection shut down for serious collision in Brampton

Credit: Pixabay/CC0 Public Domain If the crypto enthusiasts are right, the next decade will see billions of people begin using...