‘He did not deserve this ending:’ Family of Toronto man who fell to his death following interaction with police seek answers

Family of a man who fell to his death from the 16th-floor window of a North York apartment earlier this month say that their loved one was suffering from “severe depression” at the time and should have been provided with mental health support.

Toronto police, however, say that there was no “physical contact” between the officers and Taresh Bobby Ramroop and that a psychiatrist was in fact on their way to the scene at the time of his death on the evening of Oct. 13.

Ontario’s Special Investigations Unit (SIU), it should be noted, has launched an investigation into the incident.

According to the civilian agency, officers attended at a high-rise near Jane Street and Finch Avenue West at around 4:30 p.m. that day after receiving reports of a man throwing objects from a balcony.

The SIU said three Toronto police officers arrived and tried negotiating with the man. Three more officers from the emergency task force also attended the apartment, positioning themselves in an adjoining apartment as they tried to mediate, the civilian agency said.

“In the course of negotiations, the man fell from the apartment window to the ground below,” the police watchdog said.

Ramroop was pronounced dead at the scene.

Those who knew and loved Bobby, as he was affectionately known, say that version of what happened is not the full story and are demanding answers.

“On Oct. 13, 2022 our entire lives were shattered in a single second,” Ramroop’s sister Vanessa Persaud said during a press conference Thursday afternoon in the Jane-Finch community.

Persaud said at time of his death her brother was experiencing “severe depression” and was attempting to flee from roughly 20 police officers that were inside and around his home. She alleges that she and several of her family members who had come to 1825 Finch Ave. W. were forcibly held by police in a superintendent’s room off the lobby and weren’t updated about the situation until their loved one was dead.

Police have not addressed that specific allegation.

“We will never understand why these weapons, tactics, and officers were necessary. … He did not deserve this ending,” said Persaud, noting her brother was “unarmed and had no drugs on him” at the time of the incident.

Ramroop’s family is calling for all officers involved in the October 13th response, including the police official(s) who supervised and directed the police’s actions, to be named and criminally charged; and for the TPS to release to the family all police body camera footage, audio recordings, dashcam footage, and notes from all officers involved in the October 13 response.

They are also calling for the abolition of the TPS and the development of appropriate and caring emergency responses. 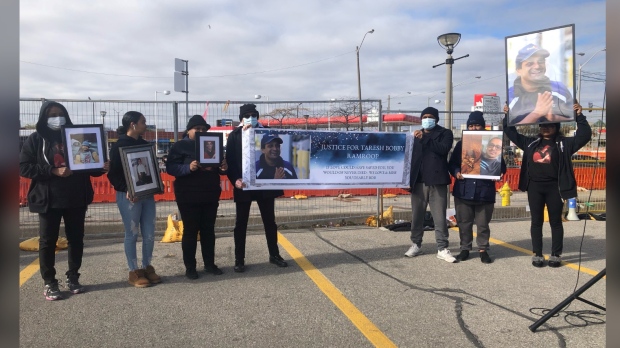 In a statement, Toronto Police Chief James Ramer provided further details about the events of that day, which essentially corroborate those already provided to the SIU.

Ramer said shortly after 4:30 p.m. on Oct 13 officers from 31 Division responded to multiple 911 calls from members of the public who were reporting seeing “furniture and other items including an air conditioning unit, being thrown from a top floor apartment and landing near a reported daycare on the street level.”

He said police “attended and secured the area to ensure the safety of passers-by and other residents of the building.”

Ramer went on to say that when officers entered the apartment they located a male who had “already barricaded himself inside a bedroom.”

“Barricading automatically requires a higher level of response according to procedure, given the elevated risk of harm and therefore this was not an incident where the MCIT (Mobile Crisis Intervention Team) would be deployed to attend the scene,” he said, noting at no time was there any “confrontation, a “stand-off” or physical contact between the officers and the man.”

According to Ramer, onsite officers contacted the Emergency Task Force (ETF) for help. Those officers, along with “tactical paramedics” arrived at the scene at about 5:30 p.m. and “began verbal negotiations with the man.

He noted that two of the ETF officers there were certified crisis negotiators.

Police also called in a psychiatrist, he said, who was on route to the scene but “unfortunately, was not able to arrive before the man, who had barricaded himself alone in a bedroom, fell from its balcony at 7:01 p.m.”

Ramer would not elaborate further on the incident.

“Everything to that point and afterwards is now the subject of an independent investigation by the Special Investigations Unit and we are legally not permitted to comment further,” he said, adding TPS is “fully cooperating” with the investigation and has provided all video and audio recordings from the officers’ body-worn cameras and all other information requested by the SIU.

Noting that the TPS’ mandate is public safety, the chief said his members – in these kinds of crisis situations – aim to safely apprehend those involved and get them the “supports they need.”

“Any loss of life is deeply felt by our members, especially when working in these fraught scenarios where the people we are trained to help and protect are in crisis and there is a risk to individual and public safety, said Ramer, noting that the ETF is a “multi-faceted specialized unit that includes highly trained officers and specialists in negotiations, de-escalation and effectively working with persons in crisis.”

“This is a tragic outcome for this man and his loved ones. With that, I wish to again offer the family and friends of this man our deepest condolences for their loss.”

Late Thursday afternoon, the SIU provided an update on the case indicating that it continues to investigate the circumstances surrounding Ramroop’s death.

An autopsy on Ramroop’s body was done on Oct. 15, the SIU said.

“The SIU is actively reviewing cellphone video, body worn camera footage and other evidence,” it  added.

All previous details released about what occurred remain the same.

The SIU is an arm’s length agency that investigates reports involving police where there has been death, serious injury, allegations of sexual assault, and/or where a firearm has been discharged at a person.

Anyone with information about this investigation, including video or photos, is asked to contact the SIU’s lead investigator at 1-800-787-8529 or online. 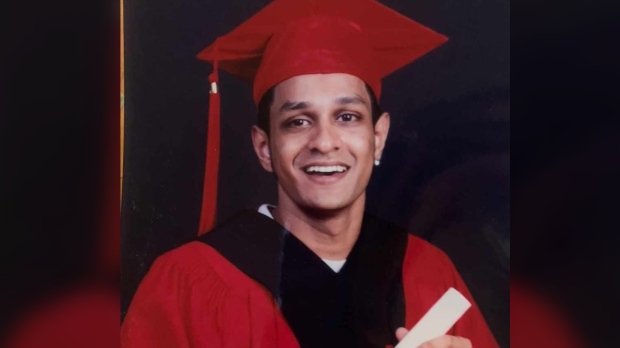 Speaking during today’s news conference, Butterfly ‘Sabrina’ Gopaul, of Jane-Finch Action Against Poverty, said what happened to Ramroop – along with several other Black and racialized community members who died following interactions with the police – “could have been prevented.”

“The police are never equipped to show up for these types of tragedies,” she said, adding Toronto police, the TPS Board, and Mayor John Tory are all responsible and should be held accountable.

Gopaul said the only solution is to reduce police funding.

A vigil for Taresh Bobby Ramroop will be held on Tuesday, Nov. 1, his 33rd birthday, outside 1825 Finch Ave. W. The gathering will get underway at 6 p.m.

Funds are also being collected online to help Ramroop’s family pay for his funeral and other related expenses.

Intruder beat Pelosi’s husband with hammer in their home

SAN FRANCISCO (AP) - An intruder attacked and severely beat House Speaker Nancy Pelosi's husband with a hammer in the...

Bitcoin and crypto here to stay despite market turmoil: Community

Brendan Fraser On The HFPA’s Lack Of Response To Sexual Assault Allegations: ‘I Knew They Would Close Ranks’