David Eby will be sworn in as British Columbia’s next premier on Nov. 18, the province announced Thursday.

Outgoing Premier John Horgan has tendered his official resignation, which the province’s lieutenant-governor said in a statement Wednesday she has accepted.

The statement followed a meeting between Eby and Lt.-Gov. Janet Austin, who asked the incoming premier to begin the process of forming government.

The swearing-in ceremony will take place at Government House in Victoria at a time that has yet to be determined, the province said in a statement.

The November break of the fall legislative session will be extended leading up to the swearing-in ceremony, the province said.

Eby’s first meeting with the legislative assembly as premier will occur during the week of Nov. 21.

He said during a brief news conference after meeting the lieutenant governor that his government will work to deliver on key priorities like affordable housing, health care and public safety.

On Wednesday, Eby couldn’t say when a possible cabinet shuffle would happen, but said he’s being briefed by the public service on major issues facing the province, the state of its economy and how the government could respond.

Earlier this week, the incoming premier announced some of the key staff who will lead his transition team, including Matt Smith as his chief of staff and Shannon Salter as deputy minister to the premier and head of the public service. 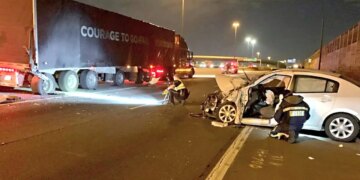 Driver in life-threatening condition after a crash on Hwy. 401 at the Mississauga border

One person was left with life-threatening injuries after a crash on Hwy. 401 near Pearson Airport.The 62-year-old driver crashed into a...