The US consumer’s love for enormous vehicles has been seen by outsiders as a curiosity and sometimes a sign of profligacy.

Either way, rising concerns about climate change seemed to create a reckoning for the behemoth-sized pickup trucks and sport utility vehicles that recently have sustained US automaker profits.

Not so, according to Detroit auto giants, who have responded to the climate crisis by launching all-electric versions of the Ford F-150 pickup, the Chevrolet Blazer SUV and other best-selling giants that seemingly promise the possibility that consumers can have it all: address global warming without sacrificing the appeal of larger autos.

Leading US environmentalists, along with the Biden administration, have praised announcements of the electric vehicle (EV) rollouts as a way to reduce greenhouse gas emissions.

Absent has been any discussion of the environmental toll of large EV trucks, which require more energy to recharge and more critical materials than do smaller EVs.

In showcasing trucks, Detroit automakers are setting the groundwork for an EV era that mirrors the current profile of US roadways and distinct from Europe, where sedans dominate.

“People are still clamoring for big pickups and SUVs,” Amici said. “I don’t expect a return to sedans.”

The trucks, often marketed in advertisements navigating rugged landscapes, provide lucrative profit margins to automakers and have become so ubiquitous on US roads that some consumers avoid smaller vehicles out of fear of how it would handle a crash with a much bigger auto.

Ford and General Motors, both of which report earnings this week, are positioning the vehicles as environmentally friendly based on how they contrast with gas-guzzling equivalents.

“It’s incredibly important that we eliminate tailpipe pollution from all cars as soon as possible,” Tonachel told AFP.

“We need broad acceptance and adoption of EVs across the market. And that’s why it’s encouraging to see automakers starting to make EVs on all types of car segments, including the most popular ones.”

The focus on large vehicles was apparent at last month’s Detroit Auto Show, where Biden test drove the EV Cadillac Lyriq, an SUV made by the GM brand. In previous trips to Detroit, Biden cheered on production of GM’s EV Hummer and the launch of Ford’s F-150 EV.

While GM’s display at the Detroit show included the Bolt, an EV sedan, greater prominence went to electric versions of three larger Chevies: the Silverado pickup, and the Blazer and Equinox SUVs.

“The customer has spoken. SUVs and trucks are what the customer wants,” Chevrolet Vice President Steve Majoros told AFP at the show.

NRDC’s Tonachel notes that some sedans still sell at substantial levels in the United States, but that they are made by companies like Japan’s Toyota and South Korea’s Hyundai.

“The different manufacturers are sort of carving out what they see as their specialty,” he said. “The Detroit three automakers, they left the compact car and most of the sedan market years ago.”

“You’re removing the emissions for the large vehicles that are the most emitting,” he said.

Rakoto, who is originally from France, said the contrast between the United States and Europe reflect different geographic qualities and transportation systems, with space in Europe more precious and public transit more integrated into regular life.

A December 2021 International Energy Agency report bemoaned the rise of SUVs, not only in the United States, but in India and Europe.

Most of the vehicles still run on gasoline, meaning that “if SUVs were an individual country, they would rank sixth in the world for absolute emissions in 2021, emitting over 900 million tons of CO2,” the IEA said.

For Benjamin Stephan, of Greenpeace in Germany, limiting global warming remains critical, meaning “you sort of have to pull every lever available.”

“Obviously an all-electric pickup truck will have a much better carbon footprint,” he said. “But you could reduce that footprint even more by having no car at all, or a much smaller car.”

Citation:
Will climate change doom US truck habit? Detroit says no (2022, October 25)
retrieved 25 October 2022
from https://techxplore.com/news/2022-10-climate-doom-truck-habit-detroit.html
This document is subject to copyright. Apart from any fair dealing for the purpose of private study or research, no
part may be reproduced without the written permission. The content is provided for information purposes only.
Tags: climate changecritical materialsglobal warminggreenhouse gas emissionspublic transittransportation systemsvehicle
Previous Post

Ontarians can get money back with these personal income tax credits 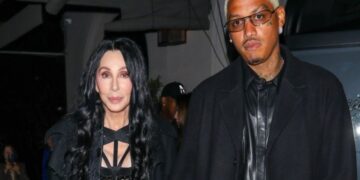 Cher and Alexander “A.E.” Edwards rang in 2023 together! The 76-year-old singer took to Twitter on New Year’s Eve to share a pic...

2 men arrested after firearm, drugs discovered in vehicle during traffic stop in Vaughan