Video has surfaced online of what appears to be a brawl between hundreds of people celebrating Diwali in Mississauga last night (Oct. 24).

The footage posted on TikTok shows two large crowds at a Diwali celebration separated by Peel Regional Police officers as fireworks can be heard in the background.

Garbage from what appears to be used fireworks litters the ground where the stand-off took place. One group can be seen waving Indian flags, while the other held banners supporting the Khalistan referendum movement.

Peel Regional Police say officers responded to reports of 400 to 500 people fighting in a Mississauga around 9:40 p.m. on Monday night.

The fight happened in a parking lot at Goreway Dr. and Etude Dr. in Malton during celebrations for Diwali – the annual festival of lights celebrated by Hindus, Sikhs and Jains.

A police spokesperson said the video circulating online is likely of the same incident. The video had been watched over 200,000 times on TikTok as of 9:00 a.m. on Tuesday.

Police say one person was injured in the brawl, a male victim who was being assessed by Peel Paramedics. The fight appeared to calm down by 10:30 p.m., but police said they were remaining in the area as a precaution.

Goreway Drive was temporarily closed in both directions between Etude Dr. and Morning Star Dr. to clear vehicles from the area.

Environment Canada issued a special weather statement on Monday ahead of Diwali for Mississauga and Brampton, saying that high levels of pollution across the area were anticipated because of the large number of fireworks that were expected to be let off as part of the celebrations.

However, later in the day Environment Canada removed any mention of Diwali from its air quality warning.

Last year, Brampton bylaw officers received more than 650 calls related to fireworks during Diwali and more than 750 calls in all of 2021 – more annual fireworks complaints than Toronto, Calgary and Edmonton combined. 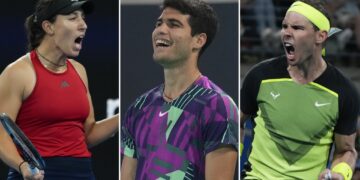 MELBOURNE, Australia - Defending champion Rafael Nadal is the top men's seed in the absence of injured world No. 1...

U.S. oil futures hold above $80 for a fifth consecutive session