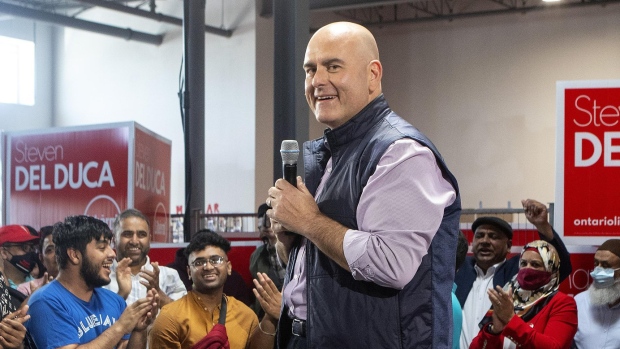 Results are in for municipal elections across Ontario. Here are the winners of some notable mayoral races:

Former Ontario NDP leader Andrea Horwath will start a new chapter in her political career, where it all began, as the new mayor of Hamilton. Horwath narrowly beat out challenger Keanin Loomis. She previously served three terms on Hamilton city council starting in 1997. Her bid for mayor came after she stepped down as provincial NDP leader earlier this year following four elections at the helm of the party. During that time the NDP secured official Opposition status, but failed to form government. Horwath was victorious over eight other candidates, including Bob Bratina, who previously served as mayor and was a Hamilton MP.

Steven Del Duca’s political comeback has proven successful: the former Ontario Liberal leader has narrowly been elected mayor of Vaughan. He beat out city councillor Sandra Yeung Racco by less than one thousand votes. Del Duca became the Ontario Liberal party’s leader in 2020 and he tried to carry it out of the political wilderness, though in this year’s provincial election it gained just one more seat than in 2018 – still not enough for official party status in the legislature. Del Duca stepped down after the loss and vied for the top job against six other candidates, including Yeung Racco, who has served five terms on council.

Former journalist Mark Sutcliffe will take over the city’s top job from outgoing mayor Jim Watson. Sutcliffe, 54, received over 50 per cent of the vote to defeat his closest challenger, Catherine McKenney, a city councillor who rose to prominence with their opposition of the “Freedom Convoy” protests in February, as well as former Ottawa mayor Bob Chiarelli. The province recently granted “strong mayor” powers to both Toronto and Ottawa in the interest of getting more housing built quickly, but Sutcliffe has said he is not interested in the veto to override council.

John Tory secured a third term as mayor of the country’s most populous city following a campaign that saw him weather criticisms of his record and the state of Toronto. Tory pitched himself as an experienced and steady hand as he received over 60 per cent of the vote and beat out 30 opponents, including his closest challenger, progressive urbanist Gil Penalosa. Penalosa’s campaign had hit on the themes of parks and public spaces, road safety and affordable housing, among other topics. Tory, 68, has committed to tackling the major issues of housing cost and availability, affordability and transit. He’s also said he supports strong mayor powers in order to get more housing built.

Incumbent mayor Patrick Brown was elected to a second term in Brampton after his first stint in office saw him face some turbulent times. Brown first secured the city’s top job in 2018 after stepping down as leader of the provincial Progressive Conservatives amid sexual misconduct allegations that he denies. As mayor, he faced allegations of financial and contract irregularities and a council sharply divided by pro- and anti-Brown allegiances. Brown nonetheless garnered significantly more votes than his main contender, Nikki Kaur, a former municipal employee who brought forward unverified allegations as a whistleblower against top city officials.

Ken Boshcoff, who served as mayor of this northern Ontario city from 1997 to 2003, will re-assume the role again after a narrow victory over coffee shop owner and former social services worker Gary Mack, and three other candidates. Boshcoff was also Liberal MP for Thunder Bay-Rainy River from 2004 to 2008, and was elected locally in Thunder Bay again in 2010 as councillor at large. Boshcoff made a failed attempt at the mayoralty in 2014, when he lost to the incumbent. He will have to grapple with a host of serious issues, including an opioid addiction crisis and calls for policing reforms to improve the relationship with Indigenous residents.

Incumbent mayor Trevor Birtch, who ran again despite facing sexual assault charges involving two women, experienced a massive defeat in Woodstock. Birtch received less than four per cent of the vote. Challenger Jerry Acchione won the mayor’s seat with a narrow margin of less than two per cent over the next closest candidate, David Hilderley.

Incumbent mayor Bill Steele emerged victorious against his lone challenger – his brother, Charles Steele. The latter Steele had said in interviews that he and his brother haven’t spoken in decades, and that he put his name on the ballot so his brother didn’t run unopposed. Charles Steele managed to capture 37 per cent of the vote, though it wasn’t enough to take the seat away from Bill Steele, who captured nearly 63 per cent of the total vote.

Josh Morgan, a city councillor since 2014 and deputy mayor since 2020, will take London’s top job from Ed Holder, the latest in a series of one-term leaders of the southwestern Ontario city. Morgan won a decisive victory over Khalil Ramal, a former member of provincial parliament for London-Fanshawe, and eight other contenders. He cited housing affordability as a top issue in his platform.

Gord Krantz narrowly secured a 14th term as mayor of this Greater Toronto Area municipality, where he is believed to be the country’s longest-serving mayor. Krantz beat out challenger Zee Hamid by less than 1,000 votes and less than 50 per cent of the total vote, significantly less than in 2018, when he garnered 82 per cent of the vote.

Attendees wear VR headsets while previewing the Caliverse Hyper-Realistic Metaverse experience at the Lotte booth during the CES tech show...