by author
in National
Reading Time: 2 mins read
0 0
A A
0
0
SHARES
13
VIEWS
Share on FacebookShare on TwitterLinkedinReddit

Mark Sutcliffe is the new mayor of Ottawa.

“What a beautiful night in Ottawa,” Sutcliffe told supporters in a victory speech at 9:20 p.m.

“I am feeling a lot of emotions right now: humility, excitement, job, a lot of relief, but most of all I’m feeling incredible gratitude. I’m so thankful for the experience that Ginny, my family and I have had through this campaign, and I’m especially grateful for the tens of thousands of people who support our vision for the future of Ottawa.”

Sutcliffe is one of at least 12 new faces at Ottawa city hall for the new four-year term.

It is the second time Ottawa has elected a political rookie as mayor, after Larry O’Brien won in 2006.

His campaign promises included capping property taxes at 2 to 2.5 per cent a year for the first two years of his mandate, finding at least $35 million in savings at Ottawa City Hall, freezing transit fares for all riders, spend $100 million over four years on roads and cycling infrastructure and building 100,000 homes over 10 years..

Other promises included at least three new dog parks in the suburbs and reducing recreation fees for children and youth by 10 per cent.

Sutcliffe’s campaign released the 100-day plan for the first items he would address as mayor, including a line-by-line review of existing city spending, striking a task force to provide concrete recommendations for solutions for responding to mental illness and substance use disorder, and launch a task force to streamline and quicken the home-building approval process.

WHO IS MARK SUTCLIFFE

Sutcliffe has lived in Ottawa all his life. He is married to his wife Ginny, and has three children.

The 54-year-old is a broadcaster and entrepreneur, working as a talk show host on Newstalk 580 CFRA and 1310 over the years and writing a column in the Ottawa Citizen. 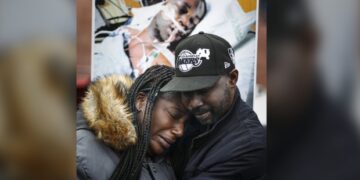 MEMPHIS, Tenn. (AP) — Five Memphis Police Department officers were fired for excessive use of force, failure to intervene and...

GTA home sales down 48.2 per cent in December from previous year: TRREB

No pharmacare bill this year would be a deal-breaker, says NDP Leader Jagmeet Singh