Singapore announced Tuesday it aims to achieve carbon neutrality by 2050, giving a firm date for the first time, and will look at using hydrogen as a major power source.

The city-state targets for carbon emissions to peak in 2030 at 60 million tonnes, a reduction of five million tonnes from the previous goal, Deputy Prime Minister Lawrence Wong said.

The Southeast Asian nation also has plans to look at developing low carbon hydrogen as a major power supply in the long term.

“If technology continues to advance, we foresee that hydrogen can supply up to half of our power needs by 2050, alongside domestic renewable energy sources and electricity imports,” Wong said at an industry conference.

He added that Singapore would experiment with key hydrogen technologies to see how it can be implemented on a large scale.

“We do not have the land for large solar or wind farms, or fast flowing rivers for hydro-electric power,” said Wong, the country’s prime minister in waiting.

Green hydrogen is in sharp focus as governments seek to slash carbon emissions amid global warming and to safeguard energy supplies hit by the invasion of Ukraine by oil and gas producer Russia.

But the “hydrogen economy” has not fully kicked into gear awaiting significant uptake from high-polluting sectors like steel and aviation.

“Many hydrogen technologies are still under development, and a global supply chain has yet to be established,” the Singapore government said in a statement.

“Nevertheless, there has been strong interest internationally from the public and private sectors to accelerate the development,” it added.

Prime Minister Lee Hsien Loong has said the low-lying island nation is especially vulnerable to rising sea levels and defending it from the threat is “existential”.

Citation:
Singapore targets net zero by 2050, eyes hydrogen power (2022, October 25)
retrieved 25 October 2022
from https://techxplore.com/news/2022-10-singapore-net-eyes-hydrogen-power.html
This document is subject to copyright. Apart from any fair dealing for the purpose of private study or research, no
part may be reproduced without the written permission. The content is provided for information purposes only.
Tags: hydrogen
Previous Post 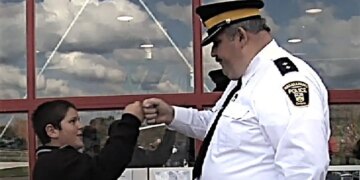 The Niagara Parks Police got some sad news over the holiday when they learned retired Inspector John Audibert passed away...