by author
in Local
Reading Time: 7 mins read
0 0
A A
0
0
SHARES
12
VIEWS
Share on FacebookShare on TwitterLinkedinReddit

John Tory is seeking a third-term as Toronto’s mayor, which would provide him with an opportunity to become the city’s longest serving chief magistrate. Most polls suggest that urbanist Gil Penalosa is Tory’s chief challenger, though there are also 29 other candidates on the ballot.

Meanwhile, the race for city council is shaping up to be interesting with eight of Toronto’s 25 wards not featuring incumbents. Elsewhere in the GTA, Bonnie Crombie is seeking a third term as Mississauga’s mayor while two former provincial party leaders in Andrea Horwath and Stephen Del Duca try to become the mayors of Hamilton and Vaughan, respectively.

For a closer look at the races across Toronto follow this link. You can also read CP24.com’s profiles of the mayoral contests in Mississauga, Hamilton, Vaughan, Brampton and Toronto and stay tuned here for updates throughout the day.

LIVE results will also be available here as soon as the polls close at 8 p.m.

Tory says he has been handed a “strong mandate” for a third term and lays out his vision for where he wants Toronto to be in another four years. He says he knows there are tough challenges ahead economically, but vows to work with council and other levels of government to meet them.

“I have never been more optimistic about Toronto’s future”: John Tory lays out a vision for where he wants Toronto to be in another four years pic.twitter.com/JefnDZtsJs

Mayor John Tory thanks supporters while delivering a victory speech.

‘Thank you Toronto’: Mayor John Tory thanks supporters after winning a “strong mandate” for a third term in office. pic.twitter.com/09rXtp9bn3

A number of races have been declared or are close in Toronto. Click here to see a ward-by-ward breakdown of the results on our election map. 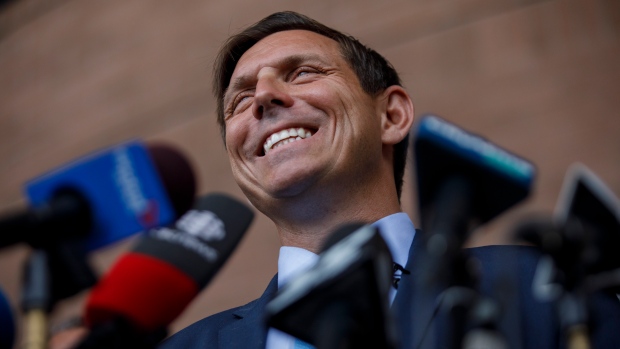 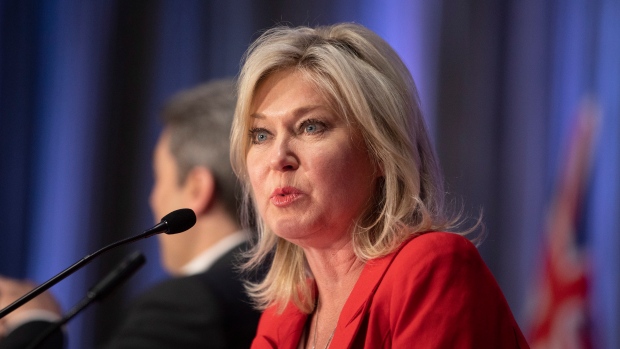 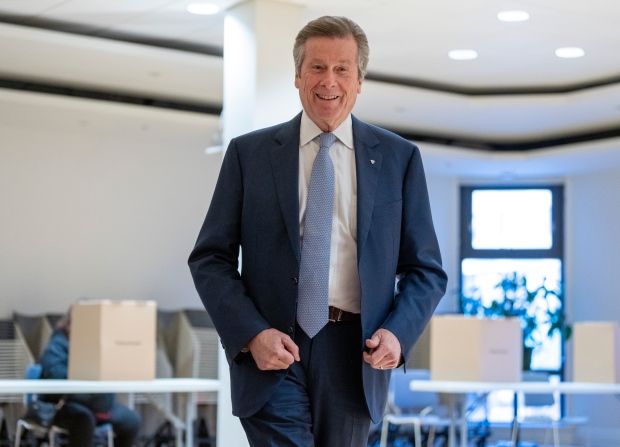 The city says anyone still in line to vote at a polling station after it closes will be allowed to cast their ballot.

Most polling stations are now closed in Toronto and many other municipalities. Follow along here as results begin to roll in.

Polls will start closing around the GTA in just about 30 minutes. Our reporters are fanned out across the GTA to bring you the latest election developments as they occur, so stay tuned!

Here with our team at John Tory HQ. See you tonight! with @stacemunro #topoli pic.twitter.com/kat2wfLZBk

There’s just a little more than an hour now before polls close in Toronto. After polls close at 8 p.m., you can see all the results as they come in for the city on our election map.

Voting hours have been extended at nine polling stations in Toronto. Any resident in line ahead of the rescheduled times will be able to cast their ballots.

Here are the voting locations impacted:

The City of Hamilton says election results will be delayed until all polls close at 9:20 p.m. tonight. Voting has been extended at a number of polling locations which opened late in order to ensure a full 10 hours of voting at each location. 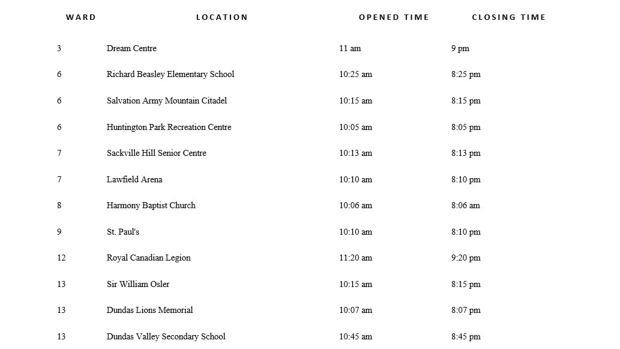 Extended hours at some polling stations in Vaughan will not impact the reporting of results, the city says. Results will start flowing on the City of Vaughan’s website as soon as they become available, starting at 8 p.m.

Voting hours have been extended at 26 polling stations in Vaughan, Ont.
Officials say this is due to “technical administrative challenges that impacted standard voting hours.”
They stressed all votes will be counted. 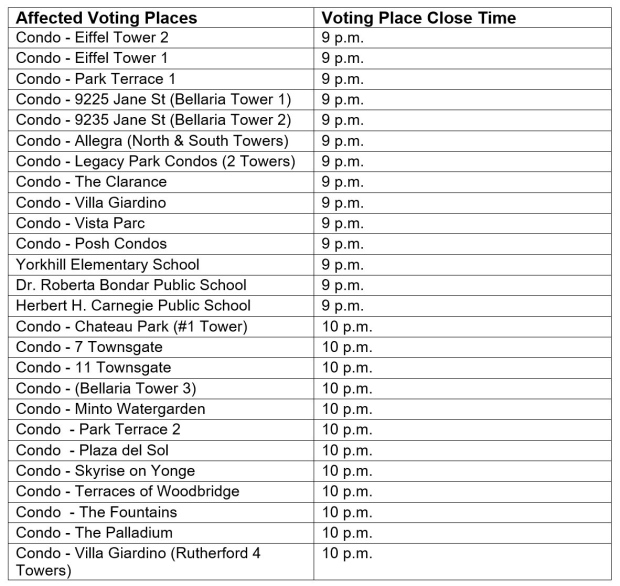 Signs have been posted in all of the polling stations in Ward 23 advising voters that ballots cast for Cynthia Lai will not be counted following her death last week. Lai represented the ward for the last four years on city council and had been seeking re-election. Votes cast for Lai in the advance polls will also not be counted. 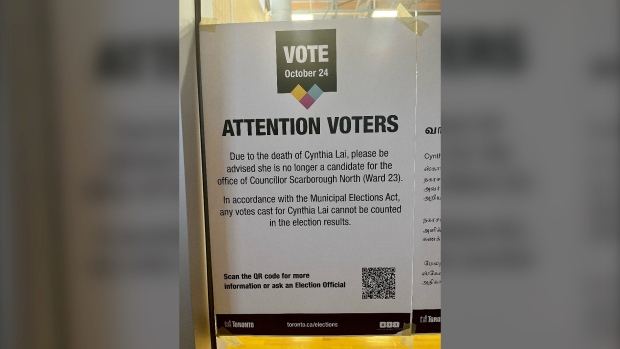 The CP24 election special will get underway at 7 p.m. and will be streamed on CP24.com. You will also be able to view LIVE results using our election map. Here is everything you will need to know to stay on top of the results.

There are a total of eight wards across Toronto without incumbents following the death of Ward 23 Coun. Cynthia Lai last week. One of the open races is taking place in Don Valley East, where longtime councillor and current deputy mayor Denzil Minnan-Wong has chosen to step aside after 22 years on city council. There are a total of 11 candidates vying to replace him, including former city councillor Jon Burnside. One of the candidates in the ward, Colin Mahovlich, told CP24 on Monday that he wants to see a “renewed focus” on investing in public transit in the ward, including the revival of the Don Mills express bus.

“It is really not a surprise why we have horrible gridlock in this city when we have spent the past three decades cutting back on transit investments, redoing plans, remaking plans and delaying plans. If we invest in transit and make it a viable alternative to getting around the city, because it is not right now, it will reduce gridlock and help everyone get around the city,” he said.

The City of Brampton announced late Sunday that it would allow eligible voters to cast their ballots at any voting location within their wards in an effort to offer a “seamless and accessible experience” for those celebrating the Hindu, Buddist, Jain, and Sikh holidays. The city said it is offering the option so electors can “fulfill their civic duty quickly and easily, and get back to this special day of celebrations.”

The City of Toronto says that all polls are open and operational. The city says that there are approximately 1.89 million eligible voters in Toronto. It is encouraging voters to consider casting their ballots during the off-peak hours of 11 a.m. to 3 p.m. to avoid a wait at the polls.

The City of Mississauga says that more than 3,000 ballots have already been cast and all polling locations have been “fairly steady.”

Former Liberal leader Steven Del Duca has cast his ballot in Vaughan. Maurizio Bevilacqua has served as Vaughan’s mayor since 2010 but chose not to seek a fourth term. 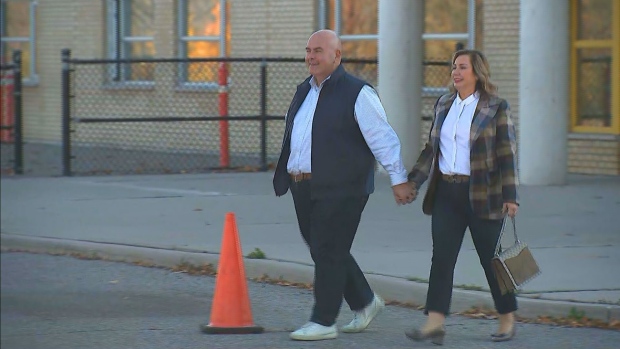 John Tory showed up at community centre on Bloor Street near St. George Street to cast his ballot. Prior to voting Tory told reporters that he is feeling optimistic about his electoral chances despite concerns about lower voter turnout in the advance polls. He also said that he is looking forward to some “renewal” on city council, given the fact that nearly one-third of all wards don’t have an incumbent running in them.

“I am happy when there are new faces on city council. Not because I didn’t get along with the people who were there before. But I just think renewal is a good thing and it happens on a gradual basis, election to election,” Tory said. “The bad news is that we have some people with great experience who have left. The good news is we have some new people with fresh ideas. My approach has always been that anybody who wants to work with me I will work with them. We have so much to do that it is all hands on deck.” 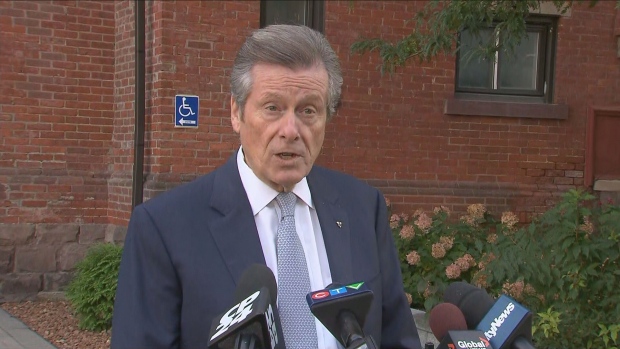 Parts of the GTA are under a special weather statement ahead of a system that could result in a messy...

Historic Beach House Restaurant in Saanich, B.C., up for sale

‘He’s close to us’: Wheelchair users in Africa await pope