by author
in Machine learning & AI, Robotics
Reading Time: 5 mins read
0 0
A A
0
0
SHARES
13
VIEWS
Share on FacebookShare on TwitterLinkedinReddit

Researchers at the Hybrid Robotics Group at UC Berkeley, Simon Fraser University and Georgia Institute of Technology have recently created a reinforcement learning model that allows a quadrupedal robot to efficiently play soccer in the role of goalkeeper. The model introduced in a paper pre-published on arXiv, improves the robot’s skills over time, through a trial-and-error process.

“By letting quadrupeds play soccer, we can push the limits of the artificial intelligence of athletic legged robots,” Xiaoyu Huang, Zhongyu Li, Yanzhen Xiang, Yiming Ni, Yufeng Chi, Yunhao Li, Lizhi Yang, Xue Bin Peng, and Koushil Sreenath, the researchers who carried out the study, told TechXplore. “Goalkeeping is an interesting but challenging task that requires the robot to react to the fast-moving ball, sometimes flying in the air, and intercept it using dynamic maneuvers in a very short amount of time (usually within one second). By solving this, we can thus also gain insight about how to create intelligent and dynamic legged robots.”

The key objective of the recent work by Huang and his colleagues was to create a four-legged robot goalkeeper that can perfect its skills as it plays, just as a human goalkeeper would. To do this, the researchers developed a reinforcement learning model that trains the robot via a trial-and-error process, rather than through a fixed, human-engineered strategy.

“The robot first learns different locomotion control policies to preform distinct skills, such as sidestep, dive, and jump, while tracking randomized trajectories for the robot’s toes,” the researchers explained. “Based on these control policies, the robot then learns a high-level planning policy to select an optimal skill and motion to intercept the ball after examining the detected ball position and robot’s states.”

The researchers trained their reinforcement learning model in a series of soccer-game simulations. Subsequently, they deployed the policies it learned on the Mini Cheetah, a real quadrupedal robot developed at the Massachusetts Institute of Technology (MIT) and tested its performance in the real world.

The reinforcement learning framework created by Huang and his colleagues was found to greatly improve the abilities of the Mini Cheetah robot as a soccer goalkeeper. In the team’s real-world tests, the robot was able to save 87.5% of 40 random shots.

“I think that the coolest aspect of our work is that, using our proposed method, the quadrupedal robot Mini Cheetah is able to perform very dynamic and agile locomotion skills, such as jumping and diving, as well as fast and precise manipulation skills, such as pushing the ball away using its swinging legs in a very short amount of time,” the researchers said. “This actually pushes the boundaries of legged locomotion, showing that the leg can also be a manipulator, just like it can be for humans.”

In the future, the reinforcement learning model created by this team of researchers could be used to improve the performance of robots designed to participate in RoboCup and other robotic soccer competitions. In addition, their model could be used to improve the agility and physical abilities of quadruped robots designed to tackle entirely different tasks, such as search & rescue missions.

“We hope that we can enable quadrupedal robots to compete with human soccer players in the near future,” the researchers added. “The robots need to perform larger variety of dynamic and agile motions and attain more intelligence in the soccer game.”

Citation:
A reinforcement learning-based four-legged robotic goalkeeper (2022, October 25)
retrieved 25 October 2022
from https://techxplore.com/news/2022-10-learning-based-four-legged-robotic-goalkeeper.html
This document is subject to copyright. Apart from any fair dealing for the purpose of private study or research, no
part may be reproduced without the written permission. The content is provided for information purposes only.
Tags: modelreal worldrobotsoccer
Previous Post 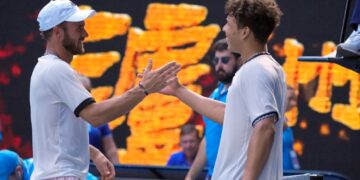