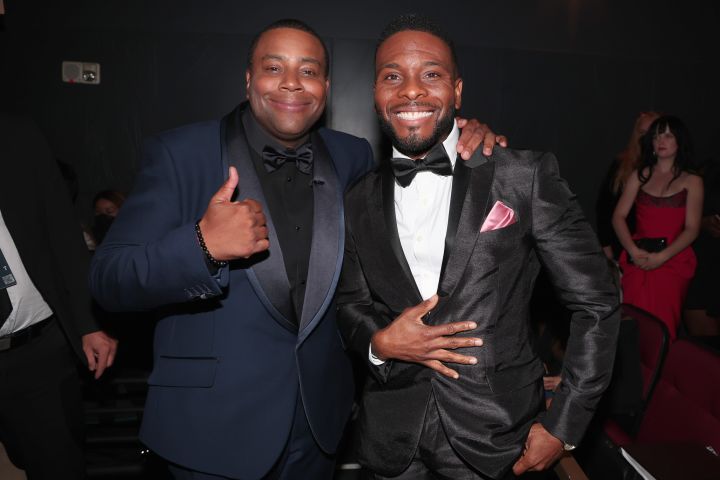 Good news, “Good Burger” fans, the long-awaited sequel to the hit ’90s film could be coming sooner than you think. ET’s Kevin Frazier spoke to Kenan Thompson at Byron Allen’s TheGrio Awards in Beverly Hills Sunday, where he gave an update on where he and Kel Mitchell are with “Good Burger 2”.

“It’s closer than it’s ever been,” the “Saturday Night Live” star added, “So, I don’t think anything is gonna derail it.”

So close in fact, that Thompson said a draft of the script has already been completed.

“We had a reading, like a little private thing just to hear the script that we’ve been working on, out loud — just with a couple friends and a couple people from Paramount and Nickelodeon, and it was so funny,” Thompson teased.

While it’s been 25 years since the first film hit theaters, Thompson said his Kenan & Kel co-star hasn’t missed a step.

“Kel has not missed a step,” he continued. “It’s like old slippers, and that character is just ripe for jokes. We read like, over 100 pages and laughed the whole time. It was so much fun.”

Thompson and Mitchell pulled off an epic “Good Burger” reunion at this year’s Emmy Awards, where Thompson was the host. Midway through the show, the 44-year-old funny man wandered over to the bar for one of the ceremony’s comedic interludes, where a man just so happened to be slumped over on the bar, apparently passed out.

KENAN AND KEL YOU WILL ALWAYS BE FAMOUS #emmys #emmys2022 pic.twitter.com/IaccICkU7H

“Excuse me, sir, can we get you a drink or something?” Thompson asked, as Mitchell sat up and smiled brightly.

“You know what, can I get a Good Burger?” he asked, as an exuberant Thompson hugged him, and the pair jumped around excitedly.

“Make that two Good Burgers!” Thompson yelled. “Oh my goodness! Let’s do some kung fu as they roll into the next package!”

As the pair showed off their ridiculous martial arts moves, Thompson teased, “Sequel coming next year!”

The reunion came just a month after Thompson talked about doing the sequel during an appearance on “The Tonight Show” in August, following a joint Instagram post he made with Mitchell celebrating the film’s 25th anniversary.

“Happy 25th Goodburger!!! I love this movie and everyone who worked on it,” Thompson captioned the nostalgic post. “So proud to be a part of something so many generations of people have come to love as well!!! ‘Sup wit that Part 2?!”

When asked if a “Good Burger 2” was happening, Thompson told host Jimmy Fallon that he and Mitchell were “working harder on it than ever.”

Kenan Thompson and Kel Mitchell Have Surprise Reunion at 2022 Emmys

Federal public servants will begin returning to office buildings in Ottawa and Gatineau today, as the federal government begins phasing...

Mercedes to build its own electric vehicle charging network

As federal workers return to the office, some decry lack of direction, long commutes