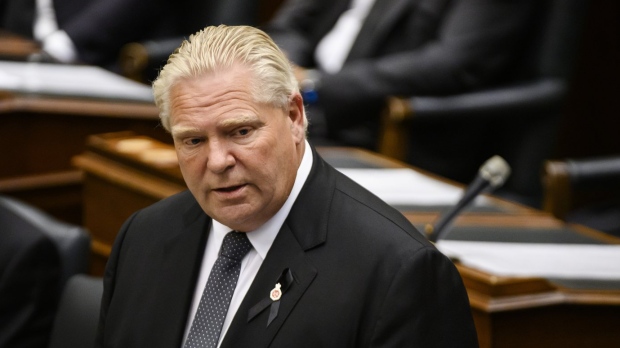 Multiple crises have enveloped Ontario as the legislature is set to resume Tuesday after a six-week hiatus.

And COVID-19 and the flu remain a threat as winter looms.

The province said housing will be one of its primary areas of focus.

“We know that Ontario’s housing supply crisis means too many young people are unable to find a home that meets their needs and budget,” said Christine Wood, spokeswoman for Premier Doug Ford.

The province is set to introduce housing legislation Tuesday that will further its goal of building 1.5 million homes in 10 years, a promise Premier Doug Ford made during the election campaign in May.

Wood also said the province “will continue to deliver on the promises we made to Ontarians.”

“This includes keeping costs down for families, getting shovels in the ground for critical infrastructure, and preparing kids for the jobs of the future by making sure they stay in class without disruption,” she said.

The health-care system and the threat of a recession are also top of mind for the province, she said.

“Our government is also working to ensure that Ontario remains on strong economic footing, and can weather any challenges we might face as a result of a potential global slowdown,” Wood said.

Health care is the top priority for the Official Opposition.

“I worry when I think about how bad the crisis in Ontario’s hospitals could get as we approach flu season, but the government keeps pouring fuel on the fire and refusing to take actions that we know can help.”

Chief Medical Officer of Health Dr. Kieran Moore said recently he expects a tough winter with a possible resurgence of COVID-19. He said that resurgence could come with the return of other respiratory illnesses, such as the flu, that were kept at bay over the past two winters due to COVID-related public health measures.

The Progressive Conservative government is working with the College of Nurses of Ontario in an effort to get thousands of internationally trained nurses living in the province into practice more quickly.

It also passed legislation last month that allows hospitals to send discharged patients to long-term care homes not of their choosing while they await their preferred home.

The province said the measure is meant to help ease the burden on hospitals. Health Minister Sylvia Jones has indicated the province will look to surgeries performed by the private sector to help alleviate a massive backlog created by the pandemic. But she has offered no details on that plan.

Critics have said Bill 124, the province’s wage-cap law on nurses and other public sector workers, has partially led to the staffing crisis in hospitals.

“One of the first things that needs to be done is the repeal Bill 124, the end of those wage caps for nurses, health-care workers, paramedics, so that in fact we stop driving people out of the sector,” Tabuns said.

The province has repeatedly said it won’t repeal the law.

Food and housing prices are top of mind for Green Party of Ontario Leader Mike Schreiner.

Food prices are up 11.4 per cent compared to the same time period last year, a main driver of inflation.

“One in six households now are facing food insecurity and food banks are being overwhelmed with the demand of people needing just the basics and yet grocery store chains are making unprecedented record profits,” Schreiner said.

With little action from the federal government on that front, Schreiner wants the province to step in.

“We’re calling on the Ontario government to show leadership by insisting on rapid implementation of a grocery code of conduct with real safeguards against predatory pricing,” Schreiner said.

Schreiner also wants the province to end exclusionary zoning policies that limit what types of housing can be built in residential areas. He wants to see densification along with substantive investments in social housing, co-op housing, non-profit housing and permanent supportive housing.

The province is also at a standoff with an education union that represents 55,000 workers such as educational custodians and early childhood educators. Talks between the two sides broke down last week but are set to resume next week.

The union is in a strike position on Nov. 3 and said a full strike is very possible. Both Ford and Education Minister Stephen Lecce have said the government has a fair offer on the table and have vowed to keep students in class without disruption.

“We need both sides to be at the table because that will affect affordability,” Fraser said.

“It’s just so hard for families when their kids are out of school to be able to get to work.”

How to watch the CP24 election special and get LIVE results

How to watch the CP24 election special and get LIVE results

EasyJet expects to return to profit after three annual losses in a row. British airline EasyJet hiked Wednesday its annual...

Eurozone inflation fell more than expected in January, to the lowest rate since May 2022