by author
in Energy & Green Tech
Reading Time: 4 mins read
0 0
A A
0
0
SHARES
12
VIEWS
Share on FacebookShare on TwitterLinkedinReddit

After nearly a century of geopolitical tension over access to oil, experts worry that the global transition to clean energy is creating new dependencies on the critical minerals needed for solar panels, wind turbines and electric vehicle batteries.

Control over most of these essential elements is concentrated in a handful of countries, none more than China, they note.

Which metals are key for the energy transition?

Cobalt, nickel, manganese and lithium are critical to making electric vehicle batteries. Rare earths such as neodymium, praseodymium and dysprosium are used in computer memory and magnets in wind turbines.

Copper and aluminium are used in electricity networks, and platinum is a catalyst for hydrogen.

These materials “will be at the centre of decarbonisation efforts and electrification of the economy, as we move from fossil fuels to wind and solar power generation, battery- and fuel-cell-based electric vehicles (EVs) and hydrogen production”, consulting firm McKinsey reported earlier this year.

How much demand is there?

Global demand for these critical metals may quadruple by 2040 if the world is to meet its pledges under the Paris climate pact, according to estimates by the International Energy Agency (IEA).

French researcher Olivier Vidal has calculated that more of the metals will need to be manufactured by 2050 than humanity has produced throughout history.

While many predict shortages, some believe technology improvements and recycling will keep up with increased production needs.

But some regions are more vulnerable than others.

According to a study by Belgium’s Louvain university, Europe faces critical shortages of metals for the next 15 years, particularly lithium, cobalt, nickel, copper and rare earths.

The European Raw Materials Alliance (ERMA) says Europe will only be able to cover between five and 55 percent of its key metals needs by 2030.

While Europe does have untapped resources of cobalt, gallium, germanium and lithium, it will need to issue mining permits to get to them, noted senior ERMA official Bernd Schaefer.

On Monday, industrial minerals manufacturer Imerys announced plans for a major lithium mine in central France.

The United States is opening its first cobalt mine in decades, in Idaho.

Automakers such as Tesla have announced their intention to enter directly into the capital of mining firms.

Which countries produce these metals?

Cobalt mining is dominated by the Democratic Republic of Congo, which accounts for 70 percent of the world total. But in terms of processing, China is the leader, at 50 percent.

China and Guinea account for more than half of the global production of bauxite, which is used to make aluminium.

What are the geopolitical risks?

“The oil and gas triangle—Saudi Arabia, Russia and the United States—has governed the world for 40 years,” said Philippe Varin, who has led French steel and car firms and recently wrote a report on the supply of raw materials to French companies.

He said that is now “little by little transforming into a bipolarisation of the world between the United States and China, the major users of metals in the energy transition”.

Varin said Chinese companies had taken control of 40 percent of the value chain for the metals needed for battery production.

Emmanuel Hache, a forecaster at the French Institute of Petroleum, said that raw materials “could be the cause of a confrontation between China and the United States in the years to come”.

“Behind all conflicts you find raw materials as a top cause,” said CyclOpe, an annual French publication on raw materials, making a link between the military coup in Guinea in 2021 and bauxite.

Citation:
Greening global economy brings dependence on critical minerals (2022, October 24)
retrieved 24 October 2022
from https://techxplore.com/news/2022-10-greening-global-economy-critical-minerals.html
This document is subject to copyright. Apart from any fair dealing for the purpose of private study or research, no
part may be reproduced without the written permission. The content is provided for information purposes only.
Tags: Fossil Fuelshydrogen productionrare earthsraw materials
Previous Post 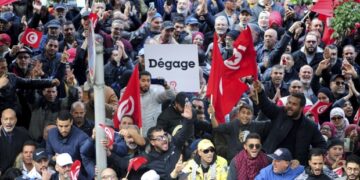 Nicole Chan was ‘frustrated’ by handling of sex assault case before suicide: officer