Environment Canada issued, then removed, what a meteorologist said was believed to be its first air quality statement in relation to holiday fireworks on Monday, prompting questions about why a major Hindu holiday was singled out.

A joint statement released by the federal agency and Ontario’s Ministry of the Environment warned “high levels of air pollution” were anticipated across parts of Toronto and surrounding areas Monday night due to expected fireworks for Diwali combining with light winds and stagnating weather conditions.

By Monday afternoon, the weather agency updated its statement without mention of Diwali, but maintained its concerns about air quality.

Environment Canada did not respond immediately to questions about why it had removed the reference.

Temperatures Monday night were expected to be colder at ground level compared to the air above, setting up conditions for smoke from small fireworks to get trapped close to the ground, an Environment Canada meteorologist explained in an interview before the updated statement was released.

“Given the fact that a lot of these (fireworks) will be released near ground level, given the atmospheric conditions, that fireworks’ smoke likely won’t get mixed to a higher level in the atmosphere,” said Geoff Coulson.

“It could stay at the ground level for a longer distance.”

“Last year nothing was done because only after the fact were those measurements available, and they can actually see those values going up,” he said. “Whereas this year, they’re being a bit more proactive.”

Diwali, also known as The Festival of Lights, is a major holiday celebrated by Hindus, as well as some Jains, Sikhs and Buddhists.

Several people online questioned the decision to issue a statement singling out Diwali fireworks, when fireworks are also common during Canada Day and Victoria Day celebrations.

“What we find in other celebrations, like Canada Day, for example, there’s not necessarily as many fireworks going off locally,” Coulson said. “There were certainly large fireworks displays and in those ones the fireworks are launched high up into the atmosphere before exploding.”

The special air quality statement itself, however, did not offer those explanations, which were only clarified in an interview with Environment Canada. The updated statement said weather conditions were expected to increase levels of fine particles and nitrogen dioxide, but provided no further reasons.

The statement says people sensitive to smoke, such as seniors or people with asthma, should take extra precautions to reduce exposure. 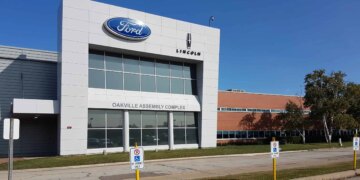 Oakville Mayor Rob Burton is being recognized for his efforts in saving the local Ford Assembly Complex.Ontario Premier Doug Ford...

Opinions split on approval of cannabis cafes in B.C.