Two people were detained Saturday in connection with a possible explosive device found at Toronto’s Billy Bishop Airport Ferry Terminal that prompted an evacuation and the operations of the island airport to be suspended.

Toronto police said the two persons of interest in custody are cooperating with the investigation.

“We’re doing our best to investigate that angle and learn what they know as quickly as we can,” Acting Insp. Jason Albanese told reporters at the scene.

Before 11 p.m., police tweeted that a controlled explosion was being conducted in the area and residents could hear a “loud bang.”

One of two controlled explosions. No dramas. @CP24 pic.twitter.com/yTmjEHBN2i

Albanese said officials from the airport first notified police about a suspicious package at the ferry terminal on the mainland side shortly before 4 p.m.

He would not elaborate on what the package was, which he described as a potential explosive device, but according to PortsToronto, which operates the airport, a “device” attached to a bike was discovered parked near the terminal.

Police evacuated the ferry terminal and closed the pedestrian tunnel to the airport. The discovery of the device also prompted Billy Bishop Airport to halt its operations for the rest of the day, resulting in departing and arriving flights being delayed.

Albanese noted that Toronto paramedics and Toronto fire are assisting in the evacuation.

“Our explosives disposal unit is on scene. They are investigating. I can’t get into too much more information with respect to what we’ve located,” he said.

PortsToronto later confirmed that the bicycle had been removed from the area and will be closely inspected off-site.

In a subsequent statement Saturday evening, the port authority said the incident led to two Air Canada flights diverting to Hamilton. They added that the runway had closed for the evening.

Several passengers who were stranded waiting in lounges were later evacuated.

Oct 22: YTZ Runway is closed for the evening. Porter has completed its flight schedule for the evening. Two Air Canada flights diverted to Hamilton. Passengers remaining in terminal being evacuated at present. Tunnel/ferry remains closed. TPS on-site and leading investigation.

As for when displaced residents can return to their homes, Albanese said investigators have not determined the exact time.

“Unfortunately, we are going to be closed for a significant period after this until we can determine what exactly we’re dealing with,” he said.

“A lot of resources are being spent right now to make sure that we deal with this effectively and safely. And that’s obviously our paramount concern at this point is to make sure that the area is made safe and that we have no injuries as a result.”

Police continue to ask the public to avoid the area. They have closed several rounds around the ferry terminal.

Transport Canada tweeted Saturday evening that it is monitoring the situation. Meanwhile, Toronto Mayor John Tory thanked the police for their work.

“I know this has been and continues to be incredibly disruptive for many people – those who live and work in the area and those travelling – and I thank them for their patience as @TorontoPolice work to make sure everyone is safe,” he tweeted. 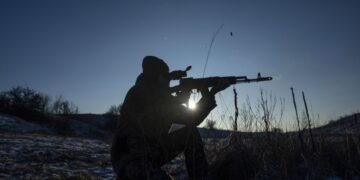 KYIV, Ukraine (AP) — The Russian military claimed Sunday to have carried out deadly missile strikes on barracks used by...

Why does Nepal’s aviation industry have safety issues? An expert explains