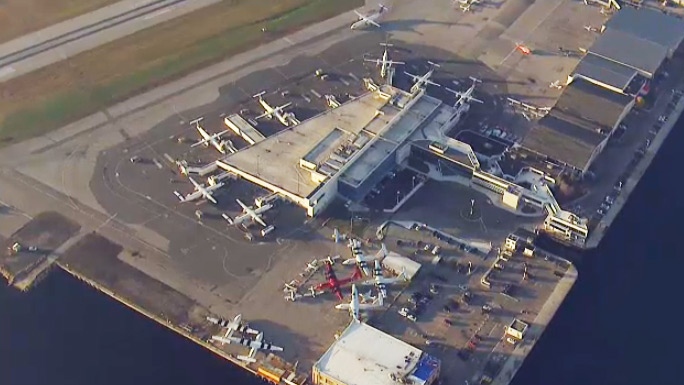 Billy Bishop Airport is set to reopen at 6:45 a.m. Sunday after a suspicious package attached to a bicycle was found late Saturday afternoon at the Island Airport’s Ferry Terminal.

The discovery, which was made shortly before 4 p.m., prompted the evacuation of three condo buildings at 34 Little Norway, 681 Queens Quay and 650 Queens Quay (partial evacuation). The exact number of displaced residents remains unknown.

The ferry terminal and the Island airport were also evacuated.

Further, the operations of Billy Bishop were suspended for several hours with departing and arriving flights being cancelled or diverted.

A number of roads in and around the airport were also off limits as police investigated.

In a tweet posted shortly before midnight, the Island airport said the device has been disarmed and Toronto police have concluded their investigation.

“The runway has reopened and operations/flights will resume at YTZ at 6:45 a.m.,” Billy Bishop Airport wrote, and advised travellers to check with their airline as some flights may be impacted by the closure.

October 22: The device has been disarmed and Toronto Police Services has concluded their investigation and released the site. The runway has re-opened and operations/flights will resume at YTZ at 6:45am.

Late last night, PortsToronto confirmed that the bicycle was removed from the area and will be closely inspected off-site.

Before 11 p.m. Saturday, police tweeted that a controlled explosion was being conducted in the area and residents could hear a “loud bang.”

Residents were allowed to return home shortly after midnight. Roads that were closed due to the aituation reopened in the area at that time, police said.

Toronto police said the two persons of interest in custody are cooperating with the investigation.

With files from Bryann Aguilar.

Oil futures tallied a sixth straight session climb on Thursday, their longest streak of gains since February. Prices extended their...