For decades, their final resting places lay unmarked in a New Westminster cemetery. Now members of the Qayqayt First Nation are being honoured in a way one of their descendants has long awaited.

Larrabee told CTV she learned many years ago some of her relatives were buried at the site: her grandfather George Joseph, as well as her great grandfather, great grandmother, and a great uncle.

“My grandfather fished for the Annieville cannery and his fishing partner…told me stories about my grandfather, about my grandmother. He said ‘I’ve had dinner with them, and it was a happy household. Your grandmother was cheeky and funny, and your grandfather was a hard worker and provided well for the family’,” she said. “In the 1920’s and the 1930’s, if you lived on reserve, where would you get the funds to put a headstone?”

Larrabee always hoped to one day see a permanent and visible memorial, which would share her relatives names and story with the community.

She said in 1916, when a royal commission took away their reserve land, her grandfather stayed.

“Because it was an urban setting, because the community was growing, because it was a port city, they cut off the reserves and they were never surrendered by the people who lived there,” Larrabee said. “The land was taken away. The Indian agent did not bring supplies to the people anymore, so they had to leave. A lot of them married into other bands, they were adopted by other bands.”

On Oct. 20, new grave markers were unveiled on the cemetery grounds, including a stone which shares information about her family’s history in the area.

“It’s always been in the back of my mind that one day, we would put markers for our ancestors. So it was really such a blessing that the rotary club offered to do it for us, and so we accepted graciously,” she said. “We’re eternally grateful and very proud to have Qayqayt First Nation ancestors recognized, finally.”

It’s recognition of a history Larrabee has been working for years to preserve, and also part of a journey to also learn more about her own roots.

“There were over 400 Indigenous people living on the river banks, and this whole area would have become extinct of Indigenous habitation. No one would know,” she said. “For a long time, I was the only one on the band list. My brothers are now on it, our families are now on it. We are less than 100 people in our community, but we are all very involved in the city right now.” 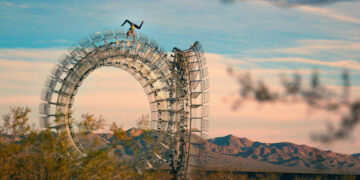 Entertainment company Spiegelworld has purchased a tiny desert town for $2.5 million near the Nevada-California state line that it plans...

Funeral to be held in Barrie today for slain OPP officer