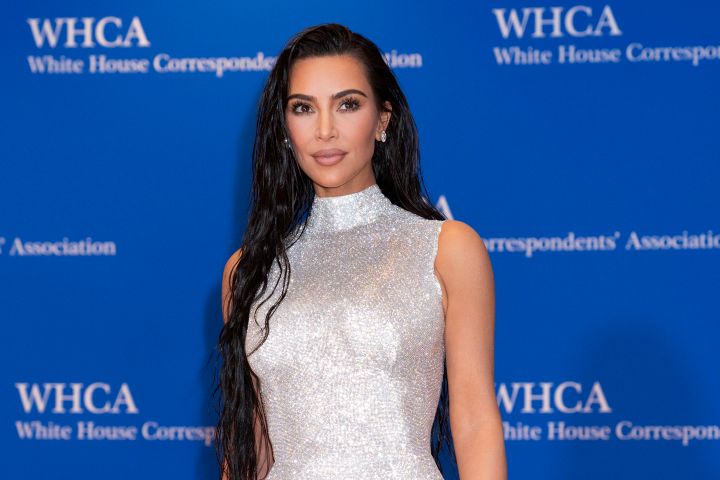 Kim Kardashian’s Las Vegas birthday bash took a delicious detour! On Saturday, The “Kardashians” star — who turned 42 on Oct. 21 — documented her celebrations that included a surprise trip. In videos shared on her Instagram story, the SKIMS founder boarded her little sister, Kylie Jenner’s private jet, with a welcome from a pair of Vegas showgirls and a set of balloons that read “HAPPY BDAY KIM.”

“The birthday surprises continue …,” she captioned the video.

As the reality TV star got on the plane, Usher’s “DJ’s Got Us Fallin’ In Love” plays while she shows off the mini bottles of 818 tequila, silver balloons, white boas, and bags with Krispy Kreme doughnuts that were on the seats of the plane.

“We are going to TAO, you guys,” Kim said as she panned the camera past mini cardboard cutouts of pictures from her Las Vegas days and mini shooters that have the same pictures on them. In the next slide, Kim caught wind of what the group  — which includes her sister Khloe Kardashian — were actually doing.

“I should have guessed, the Usher music,” Kim said as she held up a menu that featured a list of personalized birthday drinks. “Wait a minute, we’re going to see Usher.”

While the group traveled to Vegas, they took a round of jello shots, before the birthday girl celebrated guessing the group’s plans.

“Oh My God, we’re going to a f*****g Usher concert, I figured it out,” Kim yelled as she stood in the middle of the plane.

Things quickly took a turn in the next slide as she shared a video update. “Well our sound won’t turn on here BUT the plane couldn’t land due to the wind so it looks like our Carbone party and @Usher concert isn’t happening and we are heading back home,” Kim wrote over the video of her holding a box of Krispy Kreme doughnuts as she and the group got off the plane.

Kim also shared a picture of the empty table at Carbone, that was set up in honor of her birthday. “Our Carbone dinner that could have been,” she wrote.”

The canceled trip didn’t stop the party. After Kim shared a video of Khloe holding up one of the party favors while she recorded a message for Usher on Kim’s behalf, she revealed their destination.

“sooooo In-N-Out it is,” the mother of four captioned the picture of the camera crew and her party guests standing in the middle of the fast food chain’s lobby. In the next video, Kim shows off her boa and her outfit as the In-N-Out employee reads back her order

“We stopped at In-N-Out,” she said as she turned the camera to her girls. “And we couldn’t make it to Carbone in Vegas.”

Kim ends her video series with a glimpse of her enjoying her burger in the back of the party bus, and one final jello shot. “The jello shots continue on the party bus to nowhere,” she wrote.

Kim’s wild Saturday night comes after she had a dinner with her family at NOBU to kick off her celebrations. On Friday, the mogul’s family — including Kris Jenner and Kourtney Kardashian — and friends celebrated her birthday with a series of social media post in her honor.

In addition, Kim and Kanye “Ye” West’s 10-year-old daughter, North, also made a dramatic TikTok in honor of her mom’s big day.

Walter White and Jesse Pinkman are reuniting to sell a much different product in their new Super Bowl spot.TV’s iconic...

WATCH: Drone flies in Hamilton’s City Centre mall before it closes for good

Sam Smith Recalls Being ‘Chucked Off’ Tinder And Hinge, Admits Their Dog Taught Them ‘How To Love’ As They Open Up About Their Dating Life