Matt Shiltz and Sean Thomas Erlington were the backfield combo on the final drives of the Hamilton Tiger-Cats’ otherwise successful home finale on Friday. Time will tell whether that matters as much as scratching out the 30-27 win against the Ottawa Redblacks in front of an announced sellout crowd at Tim Hortons Field, which cut the Tiger-Cats magic number to clinch a playoff berth to one and ousted Ottawa from contention.

Hamilton lacked the wind, starting quarterback Dane Evans — who hurt his throwing hand — or starting running back Don Jackson down the stretch. But Shiltz pieced together a drive to get in range for Seth Small to kick a winning 30-yard field goal on the final play, getting Hamilton over on a night when it was minus-3 in the turnover battle. Thomas Erlington also tallied 13 rushes for 104 yards after being left as the only available running back after a late first-half injury to Jackson.

The upshot of the win is that Hamilton (7-10) will earn the East Division third-place playoff berth if the Saskatchewan Roughriders (6-10) lose either of their two remaining games against the Calgary Stampeders (10-6). Those first leg of that home-and-home is in Regina on Saturday.

Hamilton, which is 4-1 in its last five games, could also clinch with an away win against a playing-for-pride Ottawa (4-13) in the regular-season finale on Oct. 29. The Tiger-Cats are 1-7 away from home this season, but Ottawa is 0-8 at home and has not won in TD Place Stadium since 2019.

A Calgary win on Saturday would give the Tiger-Cats a chance to rest out anyone with as much as a hangnail before the East Division semifinal in either Montréal or Toronto on Nov. 6. That could include Evans. The veteran QB, who was 16-of-29 for 220 yards with one interception and scored two rushing touchdowns, hurt his throwing hand when he dove for a first-down on an 11-yard rush in the fourth quarter with the score knotted 24-24. Within minutes, he was icing his right hand. 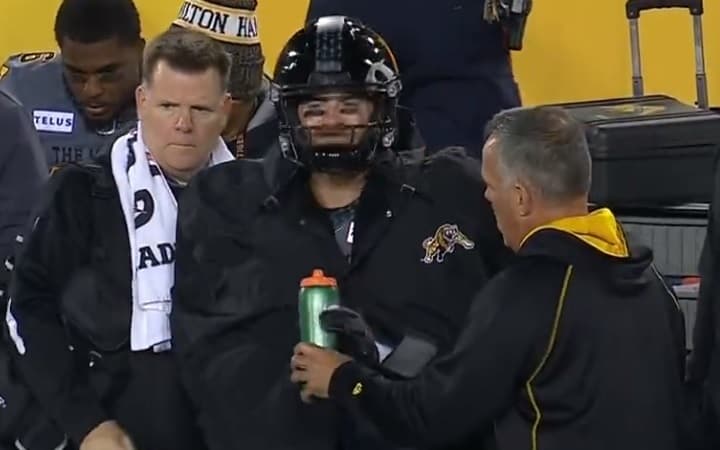 Shiltz came in eight weeks removed from his last competitive pass. He managed to float a pass to slotback Anthony Johnson for a 20-yard gain on his first attempt, which put Hamilton in range for Small to kick a 27-yard field goal for a three-point lead with 6:08 left. Johnson’s four receptions for 75 yards all came during scoring drives that produced a combined 21 Tiger-Cats points.

Tiger-Cats offensive play-caller Tommy Condell took advantage of Shiltz and leading receiver Tim White’s unique talents on the winning drive. Shiltz, who was 3-of-4 for 43 yards in relief, scampered 25 yards on a quarterback draw to cross midfield on the first snap after Ottawa’s tying field goal. Lewis Ward had levelled with a season-long 51-yarder with 1:43 left.

A 20-yard pass-and-run play by White, who gained 62 of his game-most 113 receiving yards with his legs, enabled home fans to breath easy. White made it to the Ottawa 21-yard line on that play, well within easy range for Small. The Tiger-Cats were able to let the clock run down to triple zeroes before Small booted the winner, finishing a night where he was 5-of-6. Small’s miss was on a 53-yard try, and he also added one convert.

Jackson was starting while Wes Hills, who has averaged 95 yards from scrimmage on 5.8 per touch over Hamilton’s last four games, nursed an injury. Jackson left after a heavy tackle by Ottawa’s Sherrod Baltimore on the last play before the three-minute warning in the second quarter.

The story of the game was who used the wind to their advantage, and who did not. Ottawa, whose QB Nick Arbuckle was 19-of-27 for 166 yards, outscored Hamilton 27-17 in the second and fourth quarters. Hamilton had a 13-0 edge in the first and third frames. The defence, headed by two sacks from defensive tackle Micah Johnson, also kept Ottawa out of the zone during the game’s final 34½ minutes.

That cancelled out any Hamilton hand-wringing autumnal angst about Evans and cohorts being unable to take advantage of the wind. In the third, for instance, Hamilton could only manage a field goal.

Late in that frame, recently acquired rookie defensive end Solomon Wilcots II created a golden scoring opportunity with a fumble recovery on his first sack for Hamilton. Wilcots pulled the ball away from Arbuckle at the Redblacks’ 29-yard line. Anthony Johnson then came through with a second-down conversion, making a 27-yard reception on the last play of the fourth quarter.

Hamilton was set back after the Redblacks hit the end zone thrice within an eight-minute span of a 21-3 second-quarter run. Backup QB Caleb Evans’ two short rushing touchdowns — which gave him 15 on the season, a CFL quarterback record — were sandwiched around a strip-and-score TD by cornerback Brandin Dandridge.

The wind was so strong during the first two quarters that Ottawa punted from the Hamilton 31-yard line on its opening possession instead of trying a 38-yard field goal. That decision helped the Tiger-Cats avoid allowing points off of a turnover, since the Redblacks had gained a short field when Evans was strip-sacked by Redblacks rush end Lorenzo Mauldin on his second pass drop-back of the game.

Dunbar had 46 yards after catching 3-of-6 targets, bringing him to 969 this season. Hamilton native Tyler Ternowski added a two-point convert on his only reception of the game.

Ex-Ticat Jackson Bennett had 11 rushes for 63 yards for Ottawa. In the passing phase, Ottawa was paced by R.J. Harris, who gained 62 yards by catching 7-of-11 targets.

Ward was 2-for-2 on field goals and added three converts. His second field goal was his first of more than 50 yards all season, coming in the same stadium where he missed a 54-yard game-winner to seal Hamilton’s 25-23 win against Ottawa on July 16.

Hamilton is 11-8 against Ottawa in the regular season since 2014. Twelve of their 19 games have been decided in the final three minutes of the fourth quarter or in overtime.

Hamilton is even more firmly in the driver’s seat to play in the East semifinal in two weeks. They would face the second-place finisher in the East race between the Toronto Argonauts (10-6) and Montréal Alouettes (8-8), who begin their schedule-wrapping home-and-home on Saturday (4 p.m., TSN/RDS).

The Alouettes won the season series against Hamilton 2-1 to earn a tiebreaker.

All-time, the Tiger-Cats are 2-11 on the road in division semifinals. But the last such playoff roadie was in 2011. Hamilton beat Montréal 52-44 in overtime that year, but lost the East final against the Winnipeg Blue Bombers the following week.

— with files from The Canadian Press

Handgun and ammunition seized in a Brampton drug bust

Handgun and ammunition seized in a Brampton drug bust