Hundreds of unionized workers at a Vancouver Island pulp and paper mill are poised to walk off the job after voting overwhelmingly in favour of a strike.

The Confederation of Canadian Unions (CCU) issued a statement of support Thursday for members of the Public and Private Workers of Canada (PPWC) employed at the Catalyst mill in Crofton, B.C.

The statement, which was posted on the PPWC Local 2 website, says more than 400 workers at the mill are prepared to walk out after bargaining between the union and Catalyst, a subsidiary of Paper Excellence, reached an impasse.

The confederation, which includes Local 2 as an affiliate, accused the company of negotiating in bad faith while workers seek better compensation amid rising inflation.

“Over the last 10 years, Local 2 members have made significantly less in hourly wages compared to their unionized counterparts throughout British Columbia,” says the statement from the confederation.

“And even in the face of galloping inflation, Local 2 members are simply asking their wages match those of workers in similar mills throughout the province.”

Local 2 members voted 99.71 per cent in favour of a strike mandate, with 87 per cent of the union membership participating in the vote, according to the confederation.

“The CCU and its affiliates and locals from throughout the country call for Catalyst Crofton to recognize the hard work and dedication of Local 2 members and agree to a fair collective agreement that protects workers’ wages and working conditions,” the confederation said.

Earlier this month, Paper Excellence announced it would indefinitely cease all paper operations at the Crofton mill by early December.

“Paper markets in China served by the mill have significantly weakened while there have been substantial cost escalations for chemicals, energy and wood fibre used at Crofton,” said the company in a statement.

The mill’s pulp operations are expected to continue.

A spokesperson for Paper Excellence did not immediately respond to a request for comment on the strike vote Friday. 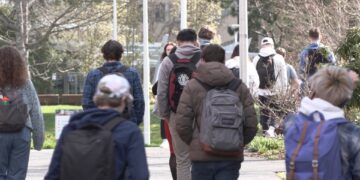 The University of Victoria is looking into recent reports of harassment towards members of the Ukrainian Students Society. On Thursday,...