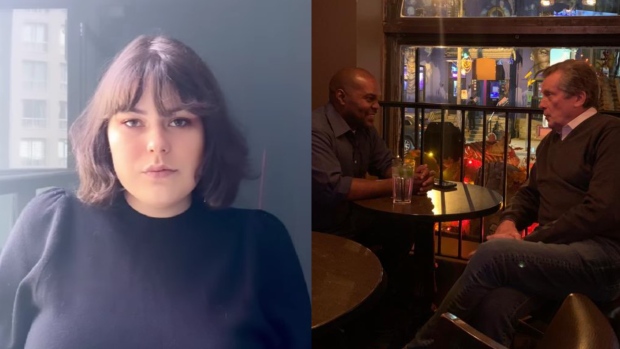 Toronto activists have been asked to retract claims that Mayor John Tory “prevented” constituents from asking questions and addressing concerns at a campaign stop held at Woody’s last week.

Tory made a campaign stop at Woody’s bar in the Church-Wellesley village on Oct. 14. Photos posted by the mayor on social media show him meeting and posing with patrons.

Enjoyed meeting residents and running into @ChrisMoiseTO out at one of the standout bars in the Church and Wellesley village. pic.twitter.com/mh6EmN5nWs

She says her intention was to voice concerns about the appointment of Myron Demkiw as Toronto’s chief of police. Demkiw was involved in planning and participated in the September 2000 bust at Pussy Palace on Mutual Street.

However, Fleischmann said she was unable to reach the mayor due to a “sea of staff” surrounding him.

“I can’t attest to any time outside of 8:30 to 10:30, but I and a few other people tried to get through to talk to Tory and unfortunately, while I was able to squeeze my way pretty close, when I got as far as I could, there was a whole row of his staff having a conversation, completely blocking him,” she said. “I decided I wasn’t going to try and push through or cause a scene, so I retreated back.”

On Monday, she uploaded a video to Instagram detailing her experience. In the video, she says Tory’s decision to hold the event in a queer space was “tone-deaf” and “brutally hypocritical,” and that he did not encourage public forum.

Shortly after Fleischmann shared her video, she was made aware of a letter from Tory’s campaign manager Patrick Harris to the Women’s Bathhouse Committee (WCB) calling claims that Tory was inaccessible during the event “entirely untrue,” and asking such statements to be retracted. 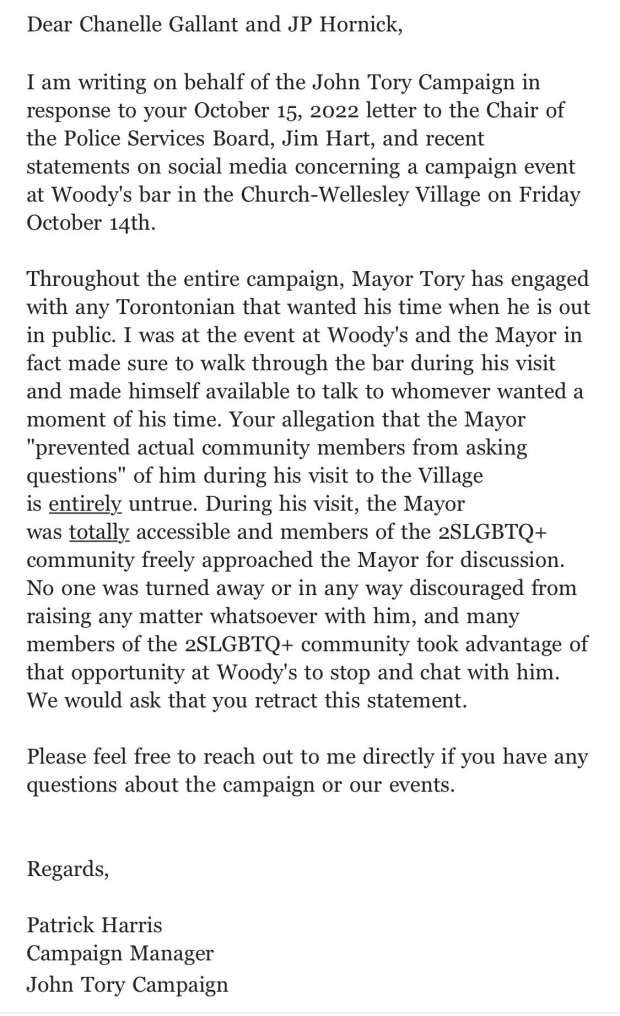 When reached for comment by CTV News Toronto, John Tory’s campaign office confirmed they had sent the letter to the WCB.

“It was sent to specifically address an accusation that the Mayor or his staff prevented members of the community from expressing their views to him while at Woody’s last Friday,” a spokesperson for the campaign said. “The Mayor was open and accessible to all in attendance and even made sure to proactively walk through the bar to make sure everyone that wanted a word, got one.”

In response to the requests made to WCB for retractions, Maya uploaded a second video.

“John Tory has sent a clear message that he is happy to coopt a queer space for his benefit but is refusing to listen to the voices of queer people in this community,” she can be heard saying.

“Instead of getting angry [..] the mayor’s campaign can better spend their time by organizing the public meeting the community wants,” they wrote.

“My advice to [the Toronto Police Services Board and John Tory] is to work with [activists] to book a date, venue, facilitator & make the meeting public.”

I don’t know Maya but think she’s brave for speaking up.

My advice to @TPSBoard + @JohnTory is to work with JP & Chanelle to book a date, venue, facilitator & make the meeting public.

This issue isn’t going away. Especially when the powerful punch down on queer youth.

Fleischmann said she’s “shocked” that Tory’s campaign manager chose to “suppress the voices of queer woman [..] instead of focusing on the issues we are putting forward, which concern the safety of the queer community at large.”

“We want to make sure that everyone, with their own lived experiences, has their chance to raise their concerns before this appointment goes through – even though I find this personally offensive, I think the most important thing is to have that conversation.” 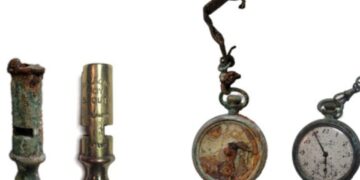 DNA and a decade of work identify Canadian soldier, 106 years after death in France

After a decade of work tracing DNA back multiple generations, the remains of a Vancouver soldier have been identified more...

Jon Peters, Pamela Anderson’s Husband Of 12 Days, Leaving Her $10 Million In Will ‘Whether She Needs It Or Not’