Concerned paramedics are pointing to an empty ambulance station in Sooke, B.C. on Thursday as proof of a wider problem that they say could come with dire consequences.

“Unfortunately, it could be loss of life,” said Scott Sywake, regional vice president for CUPE local 873, a union that represents paramedics on southern Vancouver Island.

Sywake says the reason the station sits empty numerous times a week is because resources continually get pulled from Sooke into Victoria’s core.

“There was an incident last week where a motorcycle crashed near Shirley,” said Sywake.

All the nearest resources had already been deployed into Victoria.

“The closest ambulance that responded was an hour and 10 minutes away,” said Sywake.

“We really decided that we needed to ‘sound the alarm’ to use our campaign slogan,” said Troy Clifford, provincial president with Ambulance Paramedics and Dispatchers of BC.

“We need to get more exposure to the public to really highlight how much of a crisis it is,” he said.

Currently, the union is in contract negotiations with the province. It has released a new social media campaign to pressure the province to act.

“Thirty per cent of our ambulances are parked with no paramedics to work,” said Clifford. “Thirty percent of our paramedics are off with mental health and illness injuries.”

Clifford says salaries have not kept up with other first responders, making recruitment of new staff challenging. Keeping existing staff has been hard as well.

“We’re about 30 per cent behind and that’s conservative in a lot of cases, if not more,” said Clifford.

CTV News reached out to the province today who referred us to BC Emergency Health Services for a statement. We did not hear back from BCEHS in time for publication.

“When you’re having a heart attack, a stroke, or a major incident, minutes count,” said Sywake. “It can be too late if we’re responding from Victoria.”

It’s a crisis the union is highlighting amid contract talks, but also one that paramedics on the ground say could soon cost someone their life. 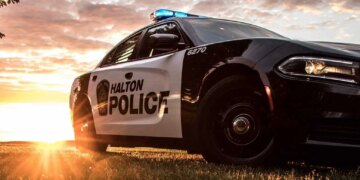 The search is on for two suspects who robbed an Oakville pharmacy on Wednesday afternoon (Jan. 4).The two men walked...

One person taken to hospital after daylight shooting in Flemingdon Park