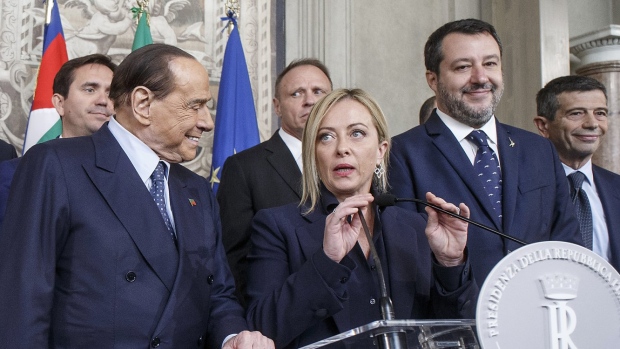 ROME (AP) — Italian politician Giorgia Meloni, whose party has neo-fascist roots, said Friday that she and her allies have asked the nation’s president to give her the mandate to form what would be Italy’s first far-right-led government since the end of World War II.

Meloni and her campaign allies met for about 10 minutes with President Sergio Mattarella at the Quirinal presidential palace. She emerged to tell reporters that the coalition had unanimously indicated to Mattarella that she deserved the mandate to govern.

The palace later announced that Mattarella had summoned Meloni back, by herself, to meet with the president late Friday afternoon.

At that meeting, the president could decide Meloni has assembled a viable government and invite her and her ministers to swear in the next day. He could also give her the mandate to try to form a government and some time to report back to him on her progress.

If Meloni, 45, succeeds, she would be the first woman to become Italian premier.

Obtaining the premiership would cap a remarkably quick rise for the Brothers of Italy party that Meloni co-founded in December 2012 and which in its first years was considered a fringe movement on the right.

“We have indicated myself as the person who should be mandated to form the new government,” Meloni said, flanked by her two main, sometimes troublesome, right-wing allies — Matteo Salvini and former Premier Silvio Berlusconi. “We are ready and we want to move forward in the shortest possible time.”

She cited urgent problems “at both national and international level,” apparent references to soaring energy prices afflicting households and businesses and the war in Ukraine, which has seen European Union members divided over strategy amid worries about gas supplies during the approaching winter.

Berlusconi and Salvini stayed silent during Meloni’s brief remarks to reporters. But at one point Berlusconi raised his eyebrows and looked behind her head at Salvini as Meloni spoke.

Both men are longtime admirers of Russian leader Vladimir Putin; Meloni staunchly backs Ukraine in its defense against the Russian invasion. Those differences could make coalition rule challenging.

Berlusconi, a three-time premier, has been chafing over the election victory by Meloni’s party. The Brothers of Italy took 26%, while Berlusconi’s Forza Italia and the anti-migrant League of Salvini, snagged just over 8% apiece in an election on Sept. 25 that saw record low turnout.

In 2018, in the previous election for Parliament, Meloni’s party took just over 4%.

Still, while her forces are Parliament’s largest, Meloni needs her two allies in order to command a solid majority in the legislature.

Berlusconi, who fancies himself a rare leader on the world stage, recently derided her as “arrogant” in written comments, apparently after Meloni refused to make a lawmaker who is one of the media mogul’s closest advisers a minister.

Earlier this week in a meeting with his lawmakers he expressed sympathy for Putin’s motivation for invading Ukraine. In that conversation, which was recorded and leaked to Italian news agency LaPresse, he also bragged that Putin had sent him bottles of vodka for his 86th birthday last month and he gave the Russian bottles of wine while the two exchanged sweetly worded notes.

In response to Berlusconi’s comments that were also derogatory about Ukrainian President Volodymr Zelenskyy, Meloni insisted that anyone joining her government must be solidly in sync with the West in opposing Putin’s war. If that meant her government couldn’t be formed, Meloni said, she’d take that risk.

Salvini has at times also questioned the wisdom of tough Western sanctions against Russia. A fellow lawmaker in Salvini’s League party who was recently elected president of the lower Chamber of Deputies has publicly expressed doubts about continuing the measures.

Outgoing Premier Mario Draghi’s national pandemic unity coalition collapsed in July, after Salvini, Berlusconi and populist 5-Star Movement leader Giuseppe Conte refused to back his government in a confidence vote. That prompted Mattarella to dissolve parliament and pave the way for elections some six months early.

While final efforts to form the new government were underway, Draghi was in Brussels, attending the final day of a European Council summit, grappling with ways to deal with higher energy prices.

On Thursday, Mattarella received opposition leaders, who raised concerns that Meloni, who campaigned with a “God, homeland, family” agenda, would seek to erode abortion rights and roll back rights such as same-sex civil unions.

Stranded passengers have all been returned from Mexico, Sunwing says

Sunwing says it has completed all of its scheduled recovery flights to bring home passengers stranded in Mexico after winter...

5 signs that an altcoin bull run could be underway