Google has been fined more than $160 million by India’s anti-trust watchdog after a probe found the tech behemoth was abusing its commanding position in the local smartphone market.

The California-based company’s Android mobile operating system is by far the dominant player in India and is run on 95 percent of all the country’s smartphones, according to research agency Counterpoint.

But the Competition Commission of India (CCI) said the operating system was configured to unlawfully crowd out rivals to YouTube, web browser Chrome and other popular Google apps.

Android had a suite of Google apps pre-installed on its phones, including the company’s own search engine, “which accorded significant competitive edge to Google’s search services over its competitors”, a CCI statement said late Thursday.

“Markets should be allowed to compete on merits and the onus is on (Google) that its conduct does not impinge this competition on merits,” it added.

The commission levied a fine of 13.4 billion rupees ($162 million) and instructed the company to allow Android users to remove pre-installed Google apps.

It also told Google not to enter into any agreement with smartphone makers that would encourage them to only sell Android-based devices or exclusively use its software.

Google faced a similar anti-trust ruling in the European Union that found the company had imposed “unlawful restrictions” on smartphone makers to benefit its search engine.

Last month the EU’s second-highest court upheld a $4.1 billion fine against the company.

Global regulators have followed suit, with Google facing a barrage of cases in the United States and Asia based on similar accusations.

India is home to the second-highest number of smartphone users in the world, after China.

Its smartphone market grew 27 percent year on year in 2021, according to Counterpoint, with annual sales exceeding 169 million units.

More than 60 percent of phones sold in the country come from leading Chinese manufacturers including Xiaomi and Oppo.

Apple remains a minor player in the budget-conscious market but has seen some inroads in recent years, and the company last month announced plans to locally manufacture its flagship iPhone 14.

Citation:
Google fined $162 mn by Indian watchdog over market dominance (2022, October 21)
retrieved 21 October 2022
from https://techxplore.com/news/2022-10-google-fined-mn-indian-watchdog.html
This document is subject to copyright. Apart from any fair dealing for the purpose of private study or research, no
part may be reproduced without the written permission. The content is provided for information purposes only.
Tags: marketmobile operating system
Previous Post 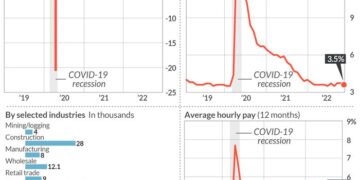 The numbers: The U.S. generated 223,000 new jobs in December to mark the smallest increase in two years, but the...

Kremlin-ordered truce is uncertain amid suspicion of motives