B.C.’s next premier has ‘mixed feelings’ about end of B.C. NDP leadership race

by author
in Local
Reading Time: 2 mins read
0 0
A A
0
0
SHARES
12
VIEWS
Share on FacebookShare on TwitterLinkedinReddit
VICTORIA, B.C. –

David Eby will be the next premier of B.C. after his only opponent in the NDP leadership race was disqualified due to what the party’s chief electoral officer deemed “serious misconduct.”

Eby will officially be declared leader of the party Friday, and sworn into the top job weeks later. On Thursday, he told reporters the transition details were still being worked out.

“I don’t think this is how any of us expected this leadership contest to end, so it’s mixed feelings for me for sure,” Eby added.

The race ended when Eby’s only competition was kicked out of the race. The party’s chief electoral officer found Anjali Appadurai broke the rules by colluding with a third party to essentially hijack the NDP. The party’s provincial executive voted to disqualify her Wednesday night.

The leadership contest started when Premier John Horgan announced he was stepping down. Speaking to reporters Thursday, Horgan said he’s “ready to go.”

When asked why the names of those who decided our province’s next premier weren’t ready available, Horgan got defensive.

“Leave them alone,” he exclaimed. “They’re doing their job, volunteers, and they’re going to be abused by bunch of people who cheated and want to get away with it?”

“I can’t be more frustrated by that type of thuggery,” Horgan added before ending the press conference early.

Climate activist Appadurai and her supporters gathered at the legislature. Appadurai continued to deny wrongdoing, accusing the party establishment of rigging the race.

“What happened here in this race was simply power working how it was designed to work,” she told a crowd of a few dozen people.

The opposition claimed the types of things the NDP took issue with are par for the course in leadership races. Liberal leader Kevin Falcon added he’d welcome more oversight.

“I have got letters from the Steelworkers that have pointed out very clearly that, you know, are saying that we need to sign up and elect David Eby in order to achieve this,” he told reporters while holding up a letter.

Falcon added the letter went on to say people didn’t have to remain members, that they could quit after their candidate was elected. Falcon maintains this is the same thing Appadurai was rejected for.

The Steelworkers insist this letter isn’t official communication. A spokesperson told CTV News one local put it out to its members, and there was no co-operation with the Eby camp.

On Friday, Eby will officially become premier-designate. Already he’s trying to assure new members who signed up due to Appadurai’s views, he’s serious about climate action.

“We’re here in the haze of forest fires, of drought, floods in Abbotsford, it’s a huge concern,” Eby added.

Eby will take over to top job despite not being voted in by the public or NDP members. His colleagues insist there won’t be a snap election.

The premier in waiting will now need to convince not only new party members but other voters in the province that he’s up to the task. That starts Friday, when he’s expected to outline his plan for his first 100 days in office. 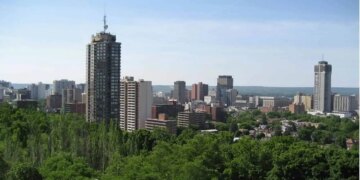 There is some cautious optimism around Hamilton city council about the province coming around on development changes, even as one...

NCL Celebrates Inaugural Season Of Sailing From Cape Town, With More To Come

‘Not an explosion’: Island Health workers recovering after pipe bursts at Victoria hospital