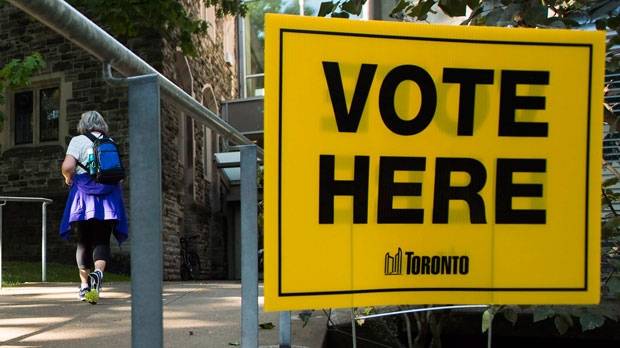 The election for one of Toronto’s French public school board trustees next week has been voided, the city clerk announced Wednesday.

In a news release, Toronto City Clerk John D. Elvidge said the vote for the Conseil scolaire Viamonde Ward 3 trustee was nullified after it was determined one of the two candidates was not eligible to hold office.

“The election for that office will not take place on October 24, and a by-election will be held instead,” the city said.

The candidate in question was not named, but the city said the individual is not a French-language rights holder, which is required in the Education Act.

Under the Municipal Elections Act, an election is void if a certified candidate becomes ineligible to hold that office, and another candidate would be elected by acclamation.

“The ballots for election day have already been printed and cannot be changed in time for Monday’s election. On election day, French language public school voters will be instructed not to mark their ballot for school board trustee in Conseil scolaire Viamonde (Ward 3 -Centre),” the city said.

“The election for this office will be voided on ballots cast on election day, as well as those already cast during the advance vote and through mail-in voting.”

Conseil scolaire Viamonde has 14 schools in Toronto and represented by three trustees. The races for the other two have been proclaimed after only one candidate ran in each ward.

It is not known when the by-election will be held but the city said information will be sent to voters as soon as possible.

Damar Hamlin’s uncle, Dorrian Glenn is speaking out about his nephew’s condition. Hamlin suffered a cardiac arrest during Monday night’s game between the Buffalo Bills...

Bank of Canada raises interest rates to 4.5% and plans to hold