by author
in Automotive, Business
Reading Time: 4 mins read
0 0
A A
0

Tesla reported Wednesday another quarter of sparkling earnings growth, but shares fell amid questions over the resilience of electric vehicle demand, CEO Elon Musk’s embattled Twitter transaction and other issues.

The electric vehicle (EV) maker scored a more than doubling of profits in the third-quarter to $3.3 billion on increased auto deliveries

But shares retreated in after-hours trading after the company reported revenues of $21.5 billion, a 56 percent increase over the year-ago period, but about $500 million below analyst forecasts.

The company flagged battery supply chain bottlenecks as a constraint on EV growth and noted that logistics volatility was an “improving” challenge.

“Knock on wood, it looks like we’ll have an epic end-of-year,” Musk said during an earnings call.

“The factories are running at full speed and we’re delivering every call we make.”

The results follow Tesla’s disclosure earlier this month that deliveries and production grew solidly in the third quarter after diving in the prior period due to a coronavirus-related factory closure at the company’s Shanghai plant.

The automaker has avoided setting specific annual delivery targets, but analysts have benchmarked a target of about 1.4 million for all of 2022.

Tesla is on pace for a 50 percent increase in production this year, but could fall shy of that goal when it comes to getting the cars to buyers, chief financial officer Zach Kirkhorn said on the call.

Tesla is working on smoothing out a “crazy delivery wave” at the end of each quarter, Musk told analysts.

Tesla watchers are expecting a strong fourth quarter with a restored Shanghai factory and the ramp-up of plants in Texas and Germany.

But Covid-19 remains a wildcard in light of China’s continued adherence to its zero-tolerance approach to fighting the virus.

Another question concerns whether Musk’s company will continue to remain immune to macroeconomic concerns, especially inflation.

The cheapest version, the Tesla Model 3, currently lists for about $48,500. With US inflation showing no signs of easing, analysts wonder whether demand for the pricey vehicles will remain robust.

Shares of Tesla have dropped more than 16 percent since September 30, shortly before the company released its third-quarter delivery figures and ahead of Musk’s October 4 revival of his bid to acquire Twitter and head off a trial in which he was being sued by the company for breach-of-contract.

In the most recent move in the takeover saga, a Delaware judge suspended litigation between the parties to allow time to finalize the $44 billion transaction.

But the judge has said that if the deal does not close by October 28, the trial could be rescheduled for November.

“I’m excited about the Twitter situation,” Musk said during the earnings call.

“I think it’s an asset that has just sort of languished for a long time but has incredible potential, although obviously myself and the other investors are overpaying for Twitter right now.”

Some analysts see the drop in Tesla shares—during a period that saw the S&P 500 advance—reflects worries that Musk will sell more Tesla shares to finance the purchase of the social media company.

“That’s why its results show it to be one step ahead of competitors.”

The analyst warned, however, that reliance on the China market is potentially a massive “bump in the road” for Tesla as geopolitical rivalry heats with the United States and Chinese electric car maker BYD approaches in its “rear view mirror.”

Tesla shares were down more than six percent to $208.16 in after-hours trading, despite Musk saying there is a potential for the company to buy back billions of dollars’ worth of shares.

Citation:
Tesla quarterly profit jumps, but revenues miss estimates (2022, October 20)
retrieved 20 October 2022
from https://techxplore.com/news/2022-10-tesla-quarterly-profit-revenues.html
This document is subject to copyright. Apart from any fair dealing for the purpose of private study or research, no
part may be reproduced without the written permission. The content is provided for information purposes only.
Tags: automotive sector
Previous Post 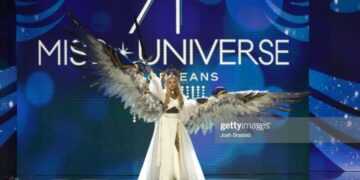 The dress Viktoria Apanasenko, the representative of Ukraine, wore for the national costume round of the 71st Miss Universe competition...

‘She told the truth:’ Hazel McCallion’s children mourn her death but celebrate her life