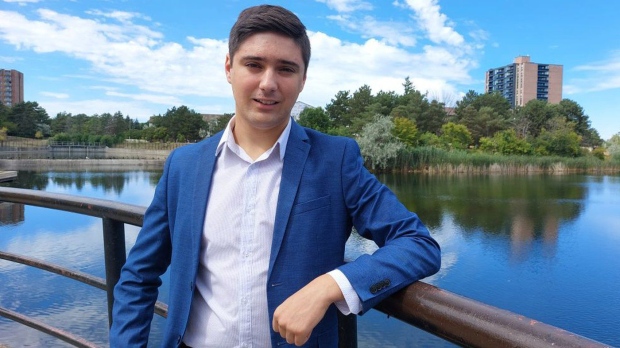 Isaiah Bryant likens campaigning for city council in Mississauga, Ont., to preparing for his upcoming G2 road test – the longer the 20-year-old does it, the more confident he feels.

“The more you do it and the more comfortable you get with it, the more you’ll be able to progress and get to where you’re trying to go,” he says.

It’s Bryant’s first time running for elected office – if he had tried for a spot on council in the last election in 2018, he would have been too young to put his name forward. And while some have taken note of his age, Bryant says he sees his youth as an advantage.

“My experience as a young person has been a benefit to my campaign because a lot of young people are feeling the issues, that a lot of Mississaugans in general are feeling, the hardest,” he says, citing the rising cost of living and housing affordability as examples.

Bryant is one of a number of candidates aged 25 and younger who are running for city council positions in this month’s municipal elections. Several of those gen-Z candidates say they’re using their campaigns to spark renewed interest in local politics and educate voters on the role of municipal governments.

“It’s difficult to get young people my age to stop being cynical about the process,” says Bryant of municipal elections. “They feel like, as young people, their voices aren’t as important.”

Voter turnout in Mississauga’s 2018 election stood at 25 per cent. Bryant says he feels young people are even less engaged than the general population, but he’s trying to change that by telling those he canvasses about what local government does.

Brennan Bempong, a 25-year-old who is also running for Mississauga city council, says he believes youth aren’t engaged in municipal politics because no one has shown them how local governments directly affect them.

Having few candidates who reflect the youth population and the issues of importance to them – such as an unstable housing market and mental health supports – is also a factor, he says.

“The only way to reach youth is to have youth in these positions,” Bempong says. “That’s why I’m stepping up now at the age of 25.”

Bempong, an orthopedic technician who has worked on political campaigns at the federal and provincial levels, says he was inspired to run when he realized city council was not “reflective of all the diverse and dynamic groups in Mississauga.”

“The youth perspective, the under-40 perspective … is not present on council,” he says. “We’re not just saying only young people should be in office, we’re saying those 12 seats should be as diverse as possible.”

Sydney Brouillard-Coyle, 22, has noticed a similar issue in Windsor.

“A lot of people do not feel represented who are under the age of 30, a lot of people who are part of the 2SLGBTQ community, as well as women,” says Brouillard-Coyle, who is trans, non-binary, asexual and uses gender-neutral pronouns.

Brouillard-Coyle, who is running for a seat on Windsor council, admits the chances of winning are slim, but says starting conversations about the issues youth care about and the visibility of queer people are more important.

“For young people, for queer people, to be able to see themselves represented … is huge because this encourages them to get out and vote, to engage politically,” says Brouillard-Coyle.

“If people look past my age, look past their own assumptions, then they would see somebody who’s a leader, who has a deep passion for the community.”

This could be because youth have policy preferences that often diverge from older voters and they are more likely to pay attention when they see a candidate that looks like them, she says.

“The increasing number of young candidates in recent elections may actually have positive effects for future youth representation,” she says.

Municipal elections across Ontario are set for Monday.