A joint funeral is underway in Barrie for the two South Simcoe police officers gunned down inside an Innisfil home last week.

Hundreds of officers from police services across the nation participated in a funeral procession for Constables Morgan Russell and Devon Northrup Thursday morning.

The procession began at around 9:20 a.m. and travelled from the Adams Funeral Home and the Steckley-Gooderham Funeral Home to the Sadlon Arena for the joint and private funeral in Barrie.

Several of road closures were in effect this morning for the procession, which members of the public were welcome to watch along the route.

Members of the Toronto Police Service attended the procession, including Chief James Ramer who said it was important for the service to pay their respects. 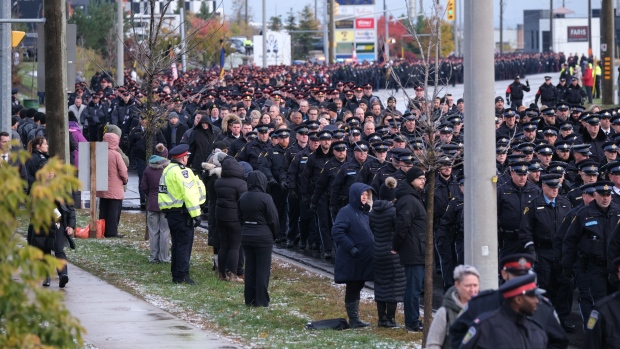 Ramer along with thousands of members from police services across the nation gathered in Toronto for a procession and funeral for slain Toronto police Const. Andrew Hong last month.

Hong was one of three victims fatally shot by a gunman in a shooting spree that spanned the Greater Toronto Area.

Hundreds of officers greeted the caskets when they arrived at the Sadlon Arena. 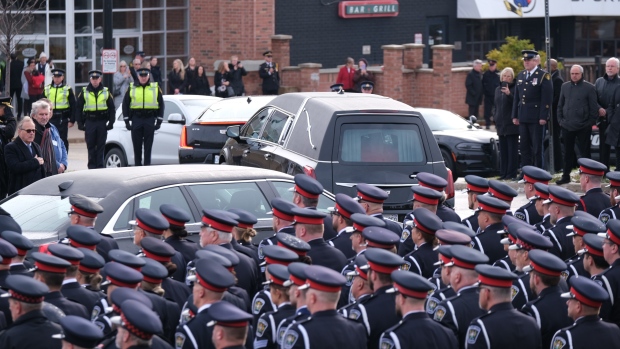 The funeral began shortly after 11 a.m. and is not open to the public.

The service will be attended by the families of Constables Russell and Northrup, Lieutenant Governor of Ontario Elizabeth Dowdeswell, Ontario Premier Doug Ford, members of the South Simcoe Police Service and representatives from other police services, emergency services personnel and officials. 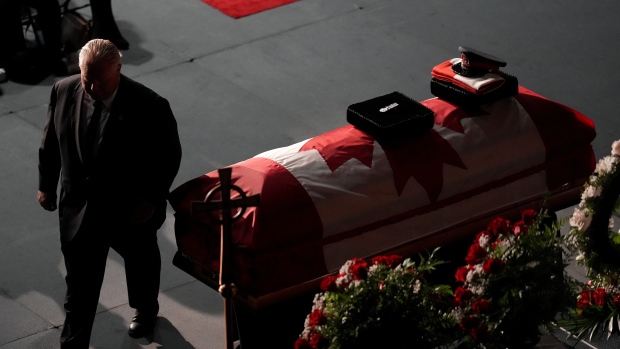 Northrup, 33, had six years of service with South Simcoe Police and is survived by his spouse Annie and his parents Ron and Heather.

Russell, 54, was a 33-year veteran of the service and is survived by his wife of 27 years Marisa and their two adult children Madelaine and Maggie.

Acting South Simcoe Police Chief John Van Dyke was only in his role for less than two weeks before the shooting happened.

“The feelings of shock and horror we all experienced upon learning about their senseless brutal deaths and the grief and sadness that followed has been a crushing weight to bear for our members and their families. But we are here to support each other during this time of sorrow and anguish,” he said at the funeral service. 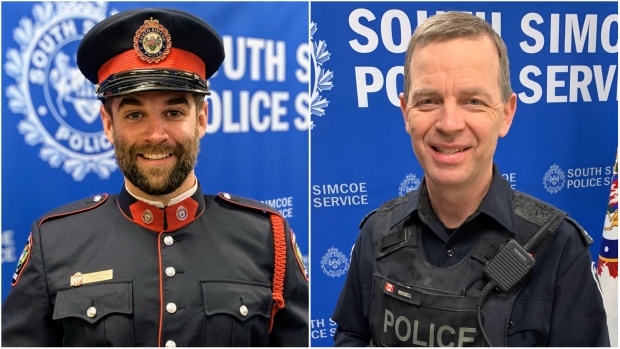 Ford said he met Const. Northrup once and that he was a sincere and funny person who lit up every room he was in.

“I had the honour of meeting Devin once and I have a picture of both of us together that means so much to me. And although his time as an officer was cut tragically short Devin left a legacy to be proud of,” Ford said.

President of the South Simcoe Police Association Sgt. Leah Thomas was friends with both officers and said they were the “epitome of gentleman.”

“They were the embodiment of our core values. Teamwork, integrity, respect, inclusive, courageous, professional, accountable, and compassionate. Policing simply wasn’t simply a job for Morgan or Devon. It was their calling,” she said. 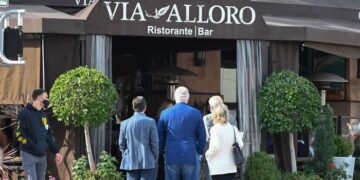 The numbers: A barometer of U.S. business conditions at service-oriented companies such as retailers and restaurants fell to 49.6% in...

Tesla: What 2023 holds for the electric vehicle company and why it might be time for Musk to go

No replacement for Chinese Grand Prix; F1 season to have 23 races