‘Everything is going up’: September food inflation climbs to 41-year high in Canada

In September the price of food continued to soar in Canada, rising 11.4 per cent compared to a year ago. It’s a new high not seen since 1981.

“Everything is going up that’s for sure,” said Victoria Swift who was grocery shopping in Langford, B.C. on Wednesday.

“I don’t know how people are doing it with minimum wage jobs,” said Romain Rancier, another shopper in Langford. “It must be a real struggle to get healthy food.”

Here is a snapshot of how much the price of many of our staples have increased over this time last year.

Some shoppers blame the retail grocery chains for the sharp increases.

“So many businesses are still managing to make record profits and yet are still raising their prices because they say they need to,” said Rancier.

The term “greedflation” is now being thrown around and the federal government has unanimously voted to support an investigation into the profits of grocery chains.

“Ratios have remained the same for the last five years,” said Dr. Sylvain Charlebois, director of the Agri-Food Analytics Lab at Dalhousie University in Nova Scotia.

Charlebois says if gouging is happening, it’s likely coming from higher up the supply chain than the grocery stores themselves.

“We should look at processing, transportation, even production as well because we do believe there are some issues up the food chain, we just don’t know what they are,” said the food policy expert.

Loblaws, which owns a range of grocery stores including the Real Canadian Superstore, is freezing prices on all of its No Name products until Jan. 31.

“There’s a little bit of a question mark as to whether this is PR exercise or not,” said Dr. Mark Colgate, a professor at the Gustavson School of Business at the University of Victoria.

Colgate says any price freeze is a good freeze. However, he does question the timing of the move by Loblaws and says it has come too late.

“Now they can see some stability in the supply chains, food prices are levelling out,” said Colgate. “They know that even if they go up, they’re only going to go up a small amount.”

The professor of business says Loblaws has frozen prices from going up, but if prices do come down there was no mention of a drop in consumer prices before Jan. 31. Therefore, he questions the company’s motives.

There appears to be no relief insight. As winter approaches, much of our produce will be imported from south of the border. With a weak Canadian dollar, that will keep prices high. 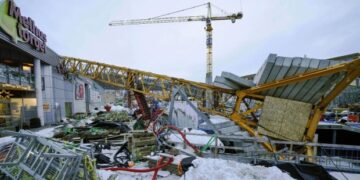 Crane crashes onto mall in Norway amid high winds; 1 injured

COPENHAGEN, Denmark — A construction crane crashed onto a shopping mall in central Norway on Friday amid strong winds, injuring...