Mediation between the Ontario government and education workers has broken down—and union representatives say it is “very possible” that a strike could be coming next month.

In a statement issued Wednesday afternoon, the bargaining committee said the “parties are too far apart.”

“Unfortunately, there has not been any movement from the Ford government towards accepting our reasonable, affordable and absolutely necessary proposals for student success,” Laura Walton, president of the Canadian Union of Public Employees (CUPE) Ontario School Boards Council of Unions, said at a news conference.

The mediator has requested that both parties resume bargaining on Nov. 1, two days before the union will be in a position to legally take job action.

More than 50,000 custodians, early childhood educators and school administration staff who work in public school boards across the province have been without a collective agreement since Aug. 4. In early October, CUPE announced its members had voted 96.5 per cent in favour of walking off the job if an agreement could not be reached.

CUPE, meanwhile, is arguing that employees should be given a $3.25 per hour increase—or an annual increase of about 11.7 per cent. They argue they deserve higher increases because the provincial government capped salary increases for the past three years and the cost of living in the province has increased drastically due to inflation.

On Nov. 3, the union is in a position to legally strike or launch a work-to-rule campaign. Walton stressed that doesn’t mean a strike will necessary take place on that day. The union will still need to give five days’ notice prior to any job action taking place; however, Walton indicated that it was “very possible” the strategy could be a full strike instead of a partial withdrawal of service.

“We were just reflecting that in the past we tried work-to-rule with this difference and meant nothing to them, in fact, it was only when we went to a full withdrawal of services in 2019, when we were moving towards that, that we were actually able to get them to come and truly negotiate at the table.”

The last time education workers negotiated their collective agreements in 2019, a breakdown of mediation resulted in a work-to-rule campaign in which there was a partial withdrawal of services performed by support staff.

A tentative deal was reached after the union provided notice of a province-wide strike.

In a statement, Education Minister Stephen Lecce called his government’s offer “reasonable” and said the government is looking for the union to bring forward a compromise that is more “affordable and fair” than the one currently on the table.

“We still have more dates. We still can land a deal. It requires us to be reasonable,” Lecce told CTV News Toronto. “We want the union to come to the table with something that is affordable and fair that keeps kids in school.”

At the same time, Lecce did not offer an example of ways in which the government compromised at the negotiating table. He also did not confirm if the government would mandate a contract or put forward back-to-work legislation to ensure employees remain on the job.

The government appears to be mindful that these negotiations may lay the foundation for bargaining when teachers come to the table next.

“My hope is the teacher unions are looking at this case study and learning quickly that the government is going to be reasonable, be fair, and most importantly, stand up for kids and keep them in school.”

Earlier this month, Premier Doug Ford sent a message to education workers saying “don’t force my hand” in negotiations. He said he wouldn’t “budge” on keeping classrooms free of disruption. 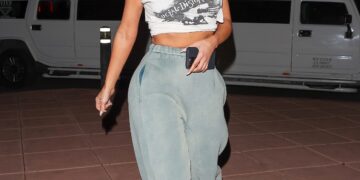 Kim Kardashian’s New Look Is All About Vintage Tees

Nobody does a fashion era quite like Kim Kardashian. Over the years, the reality star and beauty mogul has experimented...