by author
in Local
Reading Time: 3 mins read
0 0
A A
0
0
SHARES
13
VIEWS
Share on FacebookShare on TwitterLinkedinReddit

Confusion and frustration have been building for weeks over delayed or non-existent vaccine invitations and CTV News has now learned significant technical issues contributed heavily to B.C.’s botched vaccine rollout.

Up to half of available vaccination appointments for COVID-19 boosters have been unfilled and some people have waited hours on the Immunize BC help line to figure out why they’re past due for a booster invite, and why they can’t get their annual influenza shots at their doctor’s office or pharmacy – while being surprised and baffled that they now require an invitation for that as well.

One of B.C.’s top health officials is now apologizing for the confusion, delays, and conflicting information, much of which stems from significant technical problems with the new Get Vaccinated system.

“We’re going to have to work through some of what we discovered in the system and we’re fixing things as we go, there were a lot of little hiccups,” Immunize BC Team Lead, Dr. Penny Ballem said.

“Last week, I have to say, was a rough week and I sincerely apologize to people who had to sit too long on the call centre or just couldn’t get a booking.”

She predicted that by Wednesday morning, anyone with an invite for their COVID-19 booster would be able to book their flu shot using the same link with the entire system running properly by next week; more than three million people have received their invites, according to Ballem.

CONFUSION FOR DOCTORS AND PATIENTS ALIKE

CTV News had heard from multiple family doctors who were blindsided by the new requirement for invitations for flu shots; that’s never happened in B.C. before and people typically walk in to a pharmacy or can get one from their physician.

“We didn’t know that was coming, we had no information and it’s suddenly become very difficult to get vaccines rather than easier — and in particular flu shots,” said Vancouver GP, Dr. Brenda Hardie.

“If we’re literally kicking sick people out of hospital to make room for other sick people to come in, at least we could all have the ability to get our flu shots.”

Ordinary citizens like Dianne Wolcott, who’s immunocompromised and wanted to get her COVID-19 booster and flu shot separately, are getting conflicting information that’s leading to even more confusion.

“I didn’t know I needed an invitation, so I went to the pharmacy as a walk-in and the pharmacist said ‘if I give you this flu shot, it’s going to cancel your COVID booking’ and I said, ‘What?'” she told CTV News, describing multiple attempts to finally reach someone at the Immunize BC call centre.

“I don’t know anything about vaccine rollouts but I know before it was not this problematic – and now I can’t get an invite, walk-in, get on the phone. I feel like I’m in the Amazing Race to get the stupid thing.”

Late last month, the provincial health officer and health minister had warned British Columbians that they were bracing for a one-two punch of COVID-19 and influenza cases that threatened the entire healthcare system, urging people to get vaccinated to help avert the likelihood of that. Some of the frustration expressed on social media has referenced the conflict between the messaging and the reality of booking a shot.

Ballem defended the Get Vaccinated program, explaining that they’re relying on it for logistical reasons around where to send vaccine supplies and whether they can predict certain outbreaks based on demand, for example. But she said it’s also the province’s way of modernizing the health system so that all British Columbians can have access to their vaccination records through the Health Gateway.

FEWER DOSES, BUT MANY APPOINTMENTS AVAILABLE

In an internal memo obtained by CTV News, Fraser Health officials revealed to some staff that the province had ordered 30 per cent fewer influenza vaccine doses than last year they “did not see the vaccine uptake levels (they) were expecting” and wanted to avoid “last year’s wastage.”

Ballem confirmed the statistic, but said they had ordered 1.8 million doses, which would make a new provincial record if all of them are administered.

But the runaround, frustration, conflicting information and confusion may have fewer people willing to continue jumping through hoops to get vaccinated.

“I do think people are giving up because of the glitches,” added Hardie. “They’re losing confidence in the system, they don’t understand why it would be difficult.”

With thousands of appointments available across the province each day and multiple fixes in the works, Ballem is asking people to be patient and is hoping more will consider getting both a COVID-19 booster and a flu shot as the weather turns colder and it begins to feel more like the fall respiratory virus season.

“Don’t give up,” she said. “It’s very early in the campaign, which runs till December and we’ve got a lot of capacity.” 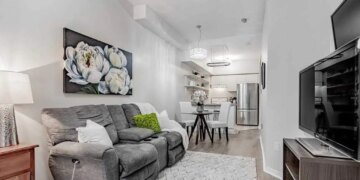 Most affordable home sold in Mississauga for $455K in January

While most houses in Mississauga will set you back at least $1 million, a townhouse went for less than half...

A 30-year revolution: SPY opened stocks to the masses, spawning a raft of options for today’s investors