Hwy 401 in Mississauga has reopened after a dump truck crash closed lanes.

The dump box came off the truck as the driver was driving, OPP Sgt. Kerry Schmidt said in a tweet. The box lifted when it hit the pedestrian overpass — the truck continued on, leaving the box behind.

The driver appeared to have mistakenly left the box up.

Engineers were brought in to assess the damage to bridge the truck hit.

Reports indicate a crane removed the truck and all Hwy 401 eastbound express lanes reopened around 3 p.m., according to a tweet from Ontario511.

The truck driver was reportedly charged.

About two hours after the dump truck crash, three vehicles collided in the collector lanes, apparently distracted by the first crash.

There were no serious injuries reported in either crash. 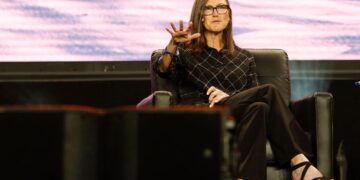 Oil demand could plunge by 30% over the next 5 years, Cathie Wood predicts. Here’s why.

Crude-oil prices are up thus far in 2023, but fund manager Cathie Wood sees a substantial drop in global oil...

No one seriously hurt after driver, Peel police officer collide in Brampton

Russia says phone use allowed Ukraine to target its troops