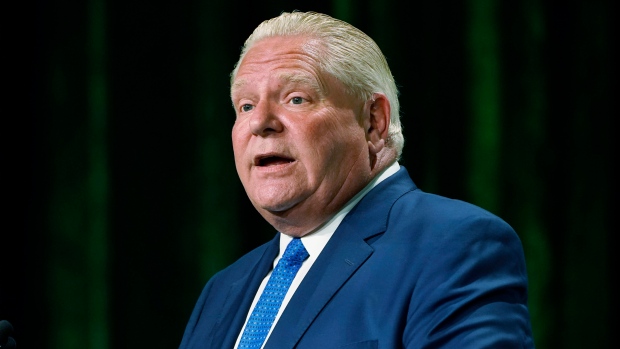 Ontario’s premier said Monday that he supported the federal government’s measures aimed at ending the so-called “Freedom Convoy” protests last winter, but documents filed with an inquiry show the provincial government turned down a request to get directly involved.

Doug Ford said he worked with Prime Minister Justin Trudeau and several mayors after hundreds gathered in downtown Ottawa in January in what local officials called an occupation that lasted several weeks.

“I stood shoulder to shoulder with the prime minister,” Ford said Monday in Ottawa alongside Justin Trudeau at an announcement for a new Nokia technology hub.

Documents filed with the inquiry into the federal government’s use of the Emergencies Act show, however, that the province directed City of Ottawa officials to deal with the Ontario Provincial Police.

Ottawa Mayor Jim Watson and city manager Steve Kanellakos were on a call with then Solicitor General Sylvia Jones in the second week of February to ask the province for resources to help end the protest, documents from the commission show.

“Ms. Jones was of the view that this was a law enforcement issue,” reads an interview summary with Kanellakos that was filed with the commission. Jones wanted Ottawa’s police chief to deal with OPP Commissioner Thomas Carrique.

The inquiry also heard Monday that Ontario was invited to but didn’t participate in meetings in February aimed at helping Ottawa police get additional resources.

Documents based on information the city manager received from police further said Ontario was “not prepared to do anything” with respect to the insurance or commercial vehicle registrations held by the truckers involved.

Ontario Provincial Police were involved in the meetings with local and federal officials, Ottawa police and the RCMP.

Ford’s office did not immediately respond to request for comment.

The premier said earlier Monday that he was not asked to testify at the inquiry into the federal government’s use of the Emergencies Act.

Top officials with the OPP, which worked closely with local police and the RCMP to clear protesters in Ottawa and Windsor, Ont., will testify at the inquiry, Ford said.

The province did not ask for standing at the inquiry, a government spokeswoman said.

People protesting government-mandated COVID-19 safety measures also gathered near the Ambassador Bridge in Windsor, shutting down incoming traffic from the U.S. for days.

Ford said it was “unacceptable” to disrupt the lives of the residents of Ottawa and cause the blockade at the border in Windsor. He said, however, that he still believes in free speech and demonstration.

On Feb. 14, the federal Liberals invoked the Emergencies Act for the first time after the Ottawa protest and Windsor blockade had dragged on. The law temporarily granted police extraordinary powers and allowed banks to freeze accounts, which the government argues was critical to ending the protests.

In Ontario, Ford declared a state of emergency on Feb. 11 in an effort to end the situation in Ottawa and the blockade at Windsor.

He pledged at the time to enact orders that would fine people up to $100,000 for blocking critical infrastructure and authorize the removal of licences if people didn’t comply. He revoked the state of emergency nearly two weeks later, but the province extended some of those policing powers.

In mid-April, Ford’s government passed legislation that gave police permanent powers to deal with protesters at border crossings and other critical transportation infrastructure.

This report by The Canadian Press was first published Oct. 17, 2022.