Watson told the inquiry that within the first few days of the protest, which began on Jan. 28, it was clear that Ottawa police were “completely outnumbered.”

The outgoing mayor “very much supported” the federal government’s use of the Emergencies Act three weeks later, he told the Public Order Emergency Commission.

The commission is examining the circumstances that led to the federal government’s emergency declaration on Feb. 14, which granted extraordinary powers to police to clear anti-lockdown protesters occupying the area outside of Parliament Hill.

“I think even a layperson like myself recognized that the Ottawa Police Service was outnumbered in terms of the resources they had,” Watson said, adding that they still had “a whole city” to police.

Watson said all levels of government must take responsibility that they didn’t act fast enough.

“There was no question when you look back in hindsight at what happened, there were several failure points along the way, whether it was the city, provincial or federal governments.”

He said that Ford “felt it was a waste of time” to participate in meetings between the three levels of government to discuss the response.

In the letter, he said that the protest had turned into a “siege” and “an aggressive and hateful occupation” that was “tantamount to psychological warfare” and had “nothing to do with the truckers’ quarrel against vaccine mandates.”

Watson shared his frustrations about Ford with Trudeau, according to a transcript and summary of a Feb. 8 phone call shared with the commission, and said Jones was being “disingenuous” about the number of Ontario Provincial Police officers who were being sent to respond.

Trudeau replied: “Ford has been hiding from his responsibility on it for political reasons as you highlighted, and important that we don’t let them get away from that, and we intend to support you on that.”

Ford is not on the list of witnesses expected to testify. On Monday, he told reporters that the use of the Emergencies Act was necessary to end an “unacceptable” situation and said he stood “shoulder to shoulder” with Trudeau throughout the situation.

Zachary Zarnett-Klein, spokesperson for Ontario’s solicitor general, said in a statement that “during the occupation our government remained focused on providing the tools our policing partners needed to bring the situation to an end.”

Public Safety Minister Marco Mendicino backed Ford’s insistence that the federal and provincial governments were in lockstep, saying Tuesday that they worked together to respond to “an unprecedented public order emergency.”

He said the testimony and documents produced for the inquiry show that the three levels of government were going to great lengths to communicate about the problem, and that police were doing everything they could to end it.

In his testimony Tuesday, Watson questioned why the intelligence gathered by all levels of government was not more accurate about the number of people coming to the city and how long they planned to stay.

The commission heard evidence on Monday that while city officials believed most people would be gone after the first weekend, the city received warnings, including from convoy supporters and a local hotel association, suggesting that demonstrators intended to dig in their heels for weeks.

In retrospect, Watson said Tuesday, police should have installed jersey barriers early to prevent protesters from getting into the downtown area, particularly onto Wellington Street.

Wellington Street was the “prize pig,” he said, where protesters could set up a stage and have “these vulgar flags â€¦ with the backdrop of Parliament Hill like they’d taken over the country.”

As the situation was coming to a head in the days before the federal government would ultimately invoke the Emergencies Act, city officials and convoy organizers negotiated a deal to move some semi trucks out of residential neighbourhoods.

Some vehicles were moved in front of Parliament Hill or out of the city altogether. “I believe that we did our best to live up to the agreement, as did truckers who did move, and we appreciate that,” Watson said.

But ultimately, it was the federal emergency declaration that proved the catalyst for clearing the streets, he said – even though he had voted against a city council motion asking for its invocation earlier in the protest.

“We needed that act,” he said. “Or this thing would’ve gone on for many, many more days if not weeks.”

The biggest issue, he said, was that there had been little capacity to move trucks out. The emergency declaration “compelled the tow truck companies to provide the service.”

A tow-truck company had written to the RCMP earlier saying it would “formally refuse towing services related to any convoy/protest,” per a letter submitted to the commission.

This report by The Canadian Press was first published Oct. 18, 2022.

– With files from Mia Rabson. 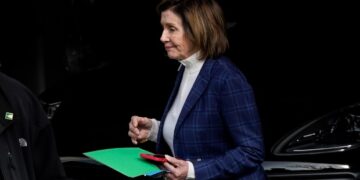 SAN FRANCISCO (AP) - House Speaker Nancy Pelosi, in her first public appearance since the brutal attack on her husband,...

Katherine Ryan Claims It’s ‘An Open Secret’ That A Prominent U.K. TV Personality Is A ‘Perpetrator Of Sexual Assault’