The 100 MW Dalian Flow Battery Energy Storage Peak-shaving Power Station, with the largest power and capacity in the world so far, was connected to the grid in Dalian, China, on September 29, and it will be put into operation in mid-October.

This energy storage project is supported technically by Prof. Li Xianfeng’s group from the Dalian Institute of Chemical Physics (DICP) of the Chinese Academy of Sciences. And the system was built and integrated by Rongke Power Co. Ltd.

The first phase of the on-grid power station project is 100 MW/400 MWh. Based on China’s average daily life electricity consumption of 2 kWh per capita, the power station can meet the daily electricity demand of 200,000 residents, thus reducing the pressure on the power supply during peak periods and improving power supply reliability in the southern region of Dalian.

Energy storage technology can help power systems achieve the strain and response capability needed after large-scale access to the power grid. It is also particularly important in facilitating the use of renewable energy, which is key to helping China achieve its carbon peak and carbon neutrality goals but is not always accessible due to variations in wind and sunlight, etc.

The Dalian Flow Battery Energy Storage Peak-shaving Power Station, which is based on vanadium flow battery energy storage technology developed by DICP, will serve as the city’s “power bank” and play the role of “peak cutting and valley filling” across the power system, thus helping Dalian make use of renewable energy, such as wind and solar energy.

The station’s energy storage technology uses vanadium ions of various valence states. Electrical energy and chemical energy are converted back and forth through redox reactions of these ions in the positive and negative electrolytes, thus realizing large-scale storage and the release of electrical energy.

This technology is promising in large-scale energy storage applications because of its excellent safety, good reliability, large output power and storage capacity, long life, good cost-performance, use of recyclable electrolytes, and environmental friendliness.

Additionally, this technology can work with conventional thermal power, nuclear power, and other power sources, providing peak regulation and frequency regulation for the power system as well as improving its flexibility.

Integrating electric vehicles into the grid could prevent blackouts

Provided by
Chinese Academy of Sciences
Citation:
World’s largest flow battery energy storage station connected to grid (2022, September 29)
retrieved 29 September 2022
from https://techxplore.com/news/2022-09-world-largest-battery-energy-storage.html
This document is subject to copyright. Apart from any fair dealing for the purpose of private study or research, no
part may be reproduced without the written permission. The content is provided for information purposes only.
Tags: chemical energyelectrical energynuclear powerpower gridpower supplypower systemsrenewable energy sourcessolar energystorage capacity
Previous Post

A robot made of sticks

Meghan King On Ex Jim Edmonds’ Wedding To Kortnie O’Connor: ‘Do Anything You Can To Keep This Woman’

Meghan King On Ex Jim Edmonds’ Wedding To Kortnie O’Connor: ‘Do Anything You Can To Keep This Woman’ 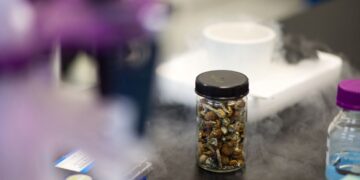 Colorado Decriminalized Use of Psychedelic Mushrooms: What Are the Health Benefits?

Share on PinterestPsychedelic mushrooms may be a powerful treatment tool for depression, PTSD, and more. James MacDonald/Bloomberg via Getty ImagesColorado...