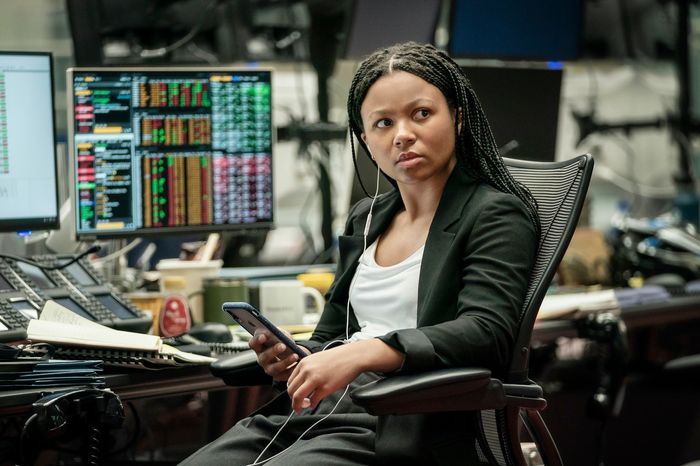 Fans of the show may remember that character Harper Stern, a young Black woman fighting for a job at the fictional investment bank Pierpoint & Co., convinced a client during a dinner in the show’s inaugural episode to purchase an option contract on a $500 million slug of 10-year Treasury notes that would have paid off if the yield topped 4%.

Although her colleagues scoffed at her original pitch, Stern argued that Treasury bonds were due for a “massive selloff” as foreign buyers of U.S. debt — particularly China due to tensions in the South China Sea — backed away from the market in response to the fictional U.S. administration’s aggressive behavior.

She stood her ground in the face of pushback from her colleagues, and eventually closed the trade, one of her first pieces of major business at the bank.

“If you think the house is burning down, this is how you monetize it,” Stern, who is played by actress Myha’la Herrold, said to infamous Pierpoint client Nicole Craig, who is played by Sarah Parish, during her original pitch.

The term of the option wasn’t made clear, but assuming it did pay off in the show’s fictional universe, there’s a chance Pierpoint & Co. would have been on the hook for the payout — that is, unless the bank laid off the risk on another client. Many of these details were glossed over in the show.

The 10-year yield
TMUBMUSD10Y,
3.730%
topped 4% briefly early Wednesday, but swiftly dropped back below that level. It was trading down 21 basis points at 3.753% Wednesday afternoon following the Bank of England’s announcement that it would intervene to calm the volatile gilt market.

Like stocks, bonds have been selling off hard since the start of the year, largely due to the tightening of global monetary policy undertaken by central banks like the Federal Reserve.

The yield on the 10-year note has risen by roughly 2.5 percentage points since the start of the year through Tuesday, according to Dow Jones Market Data. The U.S. government bond market is facing its biggest year-to-date declines since 1981.

By at least one measure, global bonds have fallen into bear-market territory this year for the first time in more than 70 years, according to Deutsche Bank.

Read on: Global bonds are in first bear market in 76 years based on two centuries of data, says Deutsche Bank