Hamilton has a new most dangerous intersection

by Author
in Local
Reading Time: 3 mins read
0 0
A A
0
1
SHARES
11
VIEWS
FacebookTwitterLinkedinRedditWhatsapp

Three of the top five intersections in Hamilton for collisions that result in a death or injury are along Main Street, which is slated to be converted to two-way traffic later this year.

The worst intersection for pedestrians being hit and injured, or killed, in the last five years is on the Mountain. Fennell Ave. W. at Upper James St. has that dubious distinction with 12 collisions where a pedestrian was hurt. Three other intersections have had at least seven.

For cyclists, Cannon Street has proven aptly named. Those findings, among others, turn up in the annual collision report by city staff that will be presented to Hamilton city council at a public works meeting on Wednesday.

On the first count, John St. S. at Main St. E., had the most collisions in the city over the most recent five-year period. With 28 between 2017-21, John and Main had two more than Main E. and Wellington St. S., which is just a few hundred metres to the east. No one was killed in any the collisions at John and Main, and seven of them involved pedestrian.

John/Main and Main/Wellington were second- and sixth-worst for collisions during the 2016-20 period. In that span, King E. and Victoria Ave. S. was the worst in the city, but it has dropped to 10th overall. 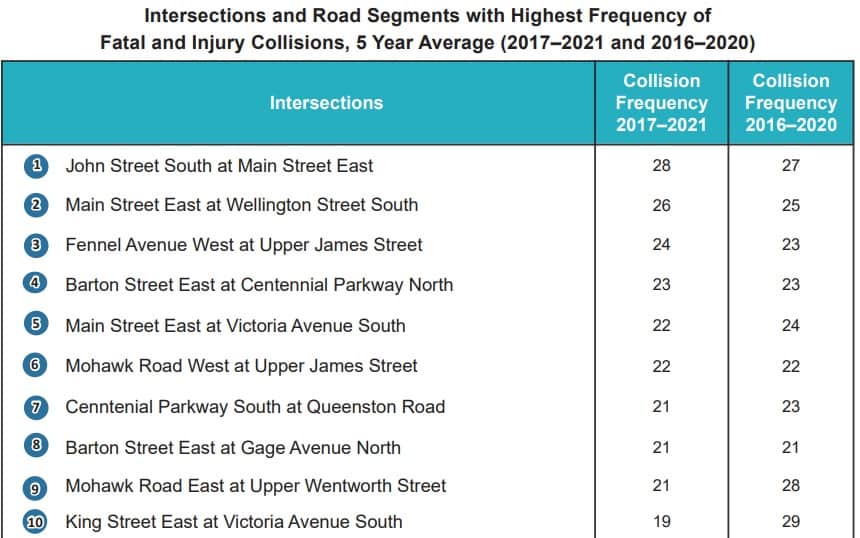 On the second, Fennell and Upper James, is the first major intersection a driver who takes the Claremont Access out of the lower city encounters after driving on to the Mountain. While it is third-worst for total collisions, half of those involved pedestrians, which made Fennell/Upper James the only intersection in the city where the number of people on foot who were hit by drivers in the last five years hit double digits.

Dundurn St. S. and King St. W. is second-worst for pedestrian collisions, with nine. John/Main and Barton E./Lottridge were tied for third with seven. 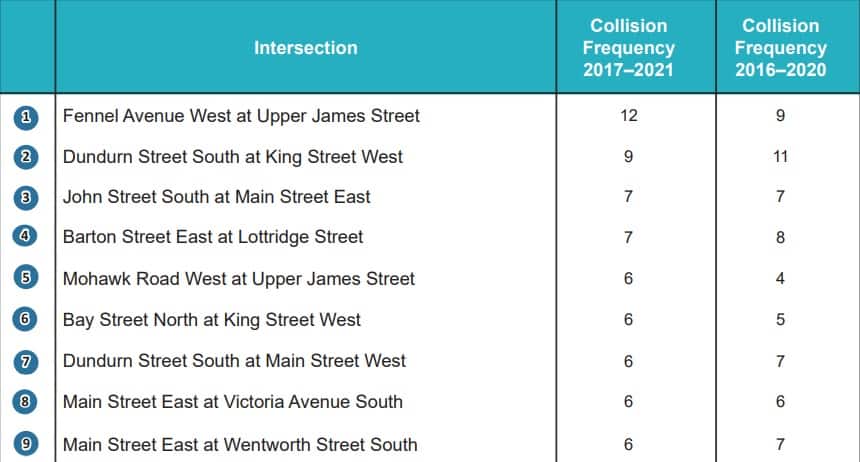 Cannon St. E. remains the most notorious stretch of street for Hamilton cyclists. A two-way bike lane was installed in 2014 on the south side of Cannon, which is a one-way street that intersects with northbound and southbound one-ways. City council recently voted to close Cannon to heavy trucks under a recently approved ring-road plan that will divert truck traffic away from downtown neighbourhoods.

Two of the worst three intersections for cyclists being struck are Cannon E. at Wellington N., with 10, with Cannon E. at Gibson Ave. ranking third with 5. Barton St. E. and Centennial Parkway N. had six collisions in that same time.

The roughest road segment for cyclists is also on Cannon between Wellington and West Ave. N., with five collisions in as many years. No other road segment had more than three. 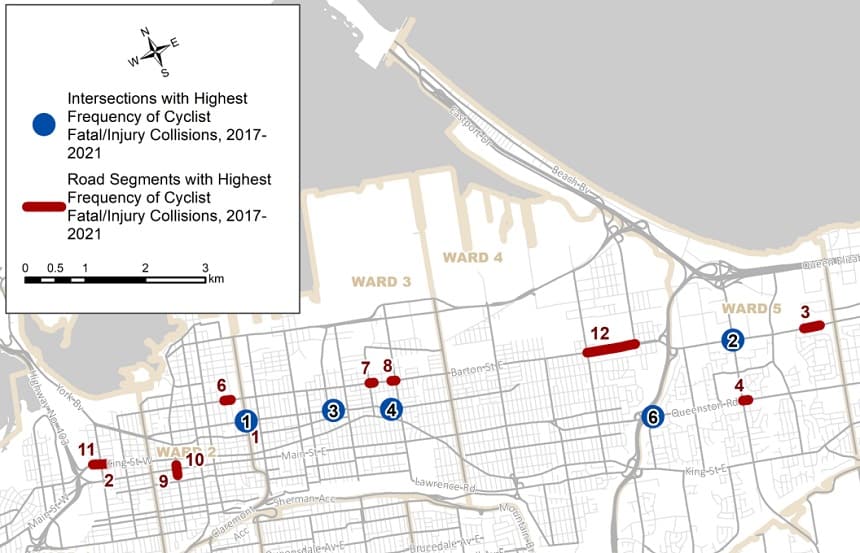 The report does not include the year to date, where a string of lethal collisions has spurred calls to make Hamilton roads safer for all users. Nine pedestrians in Hamilton have died already this year — matching the entire total from 2021 — after being struck by cars. A cyclist also died on Tuesday morning after they were struck around 5:30 a.m. on Upper Wentworth St.

City council will be considering adopting a Complete Streets Design Manual on Wednesday. The entire 39-page collision report is also available on escribemeetings.com.

A Brazilian restaurant in Toronto that was in business for 12 years has now permanently closed.Sabor Brasil served an extensive...

The Great Gatsbowl, a 1920s-themed night of fun, frivolity and lawn bowling all in support of childhood cancer research is...

MornsLive TV is a live tv streaming site which a number of live streaming links. You do not need any...

Halton police investigating after one person shot in Burlington