This lavish $11.4 million mansion for sale in Toronto has a movie theatre and sauna

If you had all the disposable income in the world and for some reason wanted to invest it in overpriced Toronto real estate, what would your dream home have? A movie theatre for entertaining? An aqua marine pool for summer dips? Would it be a sprawling mansion big enough for its own elevator?

One home just listed at 49 Plymbridge Road in Hoggs Hollow has all that and more, reserved for only the elite given its $11.4 million price tag.

The stunning impressions of the “French stone chateau,” as the realtor calls it, start in the foyer, where visitors are met with a dramatic bifurcated staircase lit by a chandelier and giant skylight above. 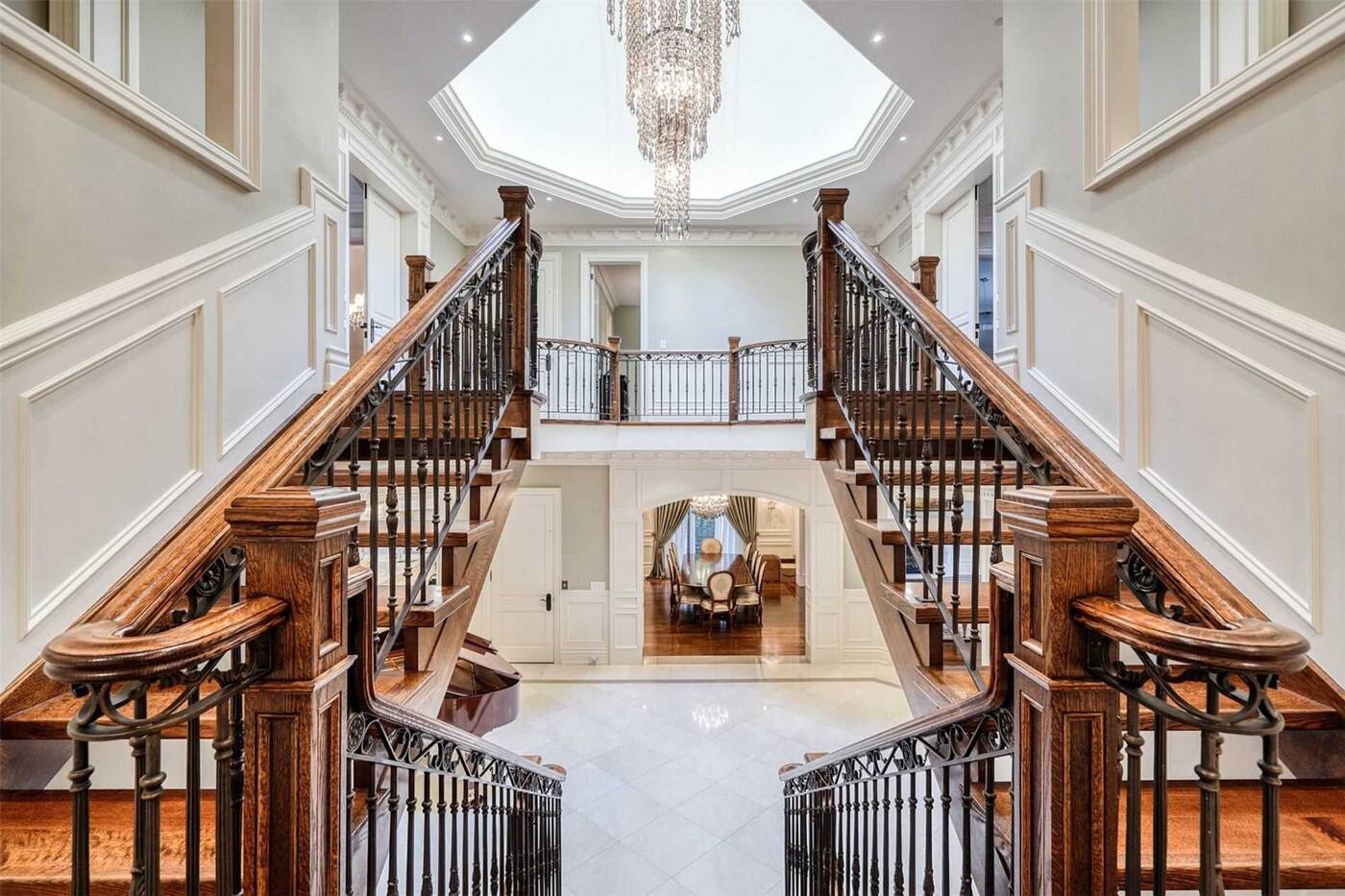 Who doesn’t love a dramatic split staircase? Photo from the zolo.ca listing.

Those who aren’t willing or able to take the stairs can instead opt for the private elevator to get to the second floor, which is complete with six bedrooms, the primary one of which is larger than most Toronto apartments at 1,000 square feet.

Work from home in your sumptuous wooden study (one of at least three office spaces in the house) before you work out in your in-home gym/dance room or play a tune on the piano in your grand entryway. 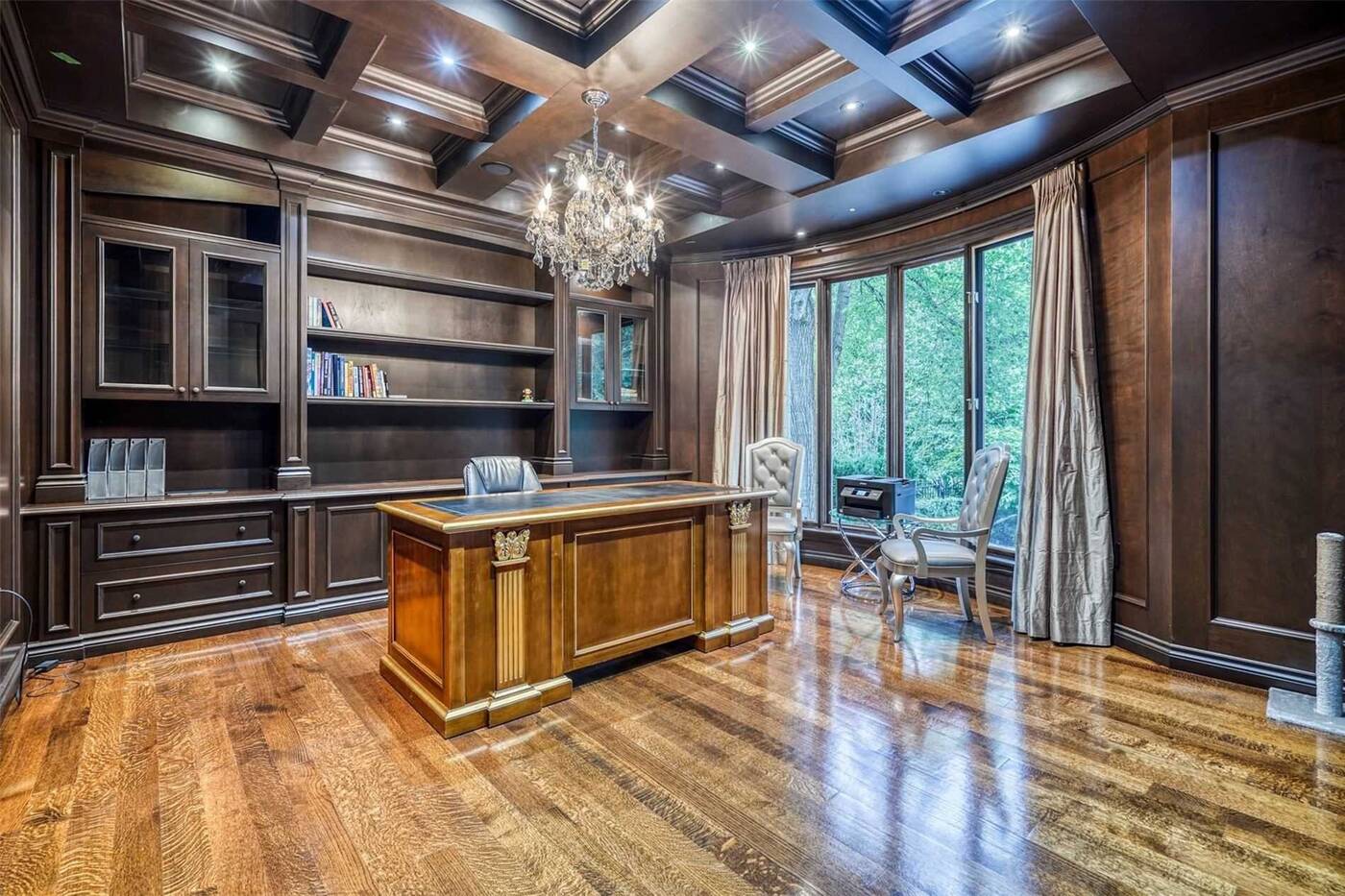 This striking library is one of at least three designated office spaces in the house. Photo from the zolo.ca listing.

You can also have a nice hot sauna after your dip in your very private inground pool (with waterfall, of course), or take in a movie with some friends on your very own basement big screen, equipped with large leather loungers. 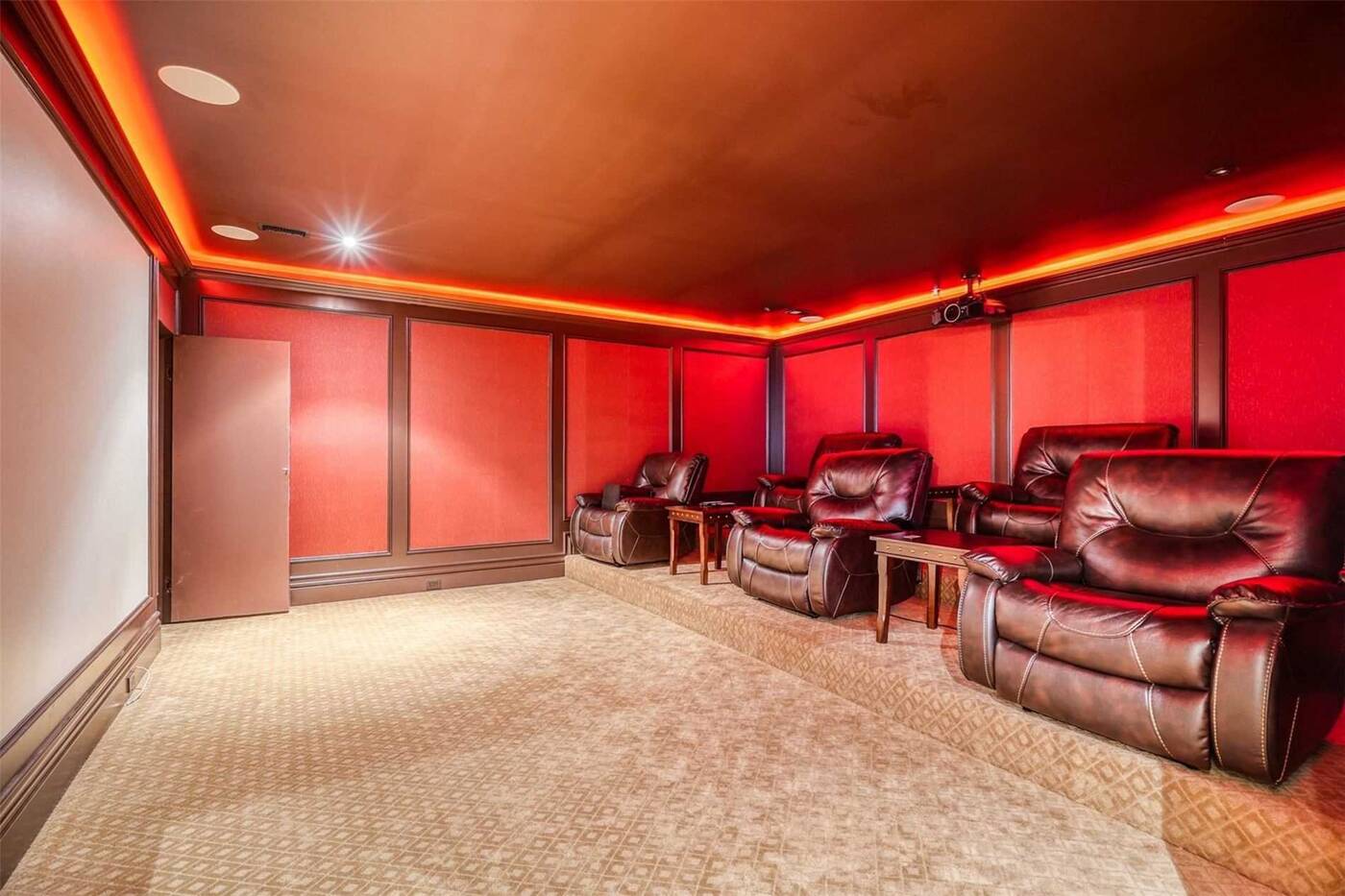 A full-on basement theatre to take your movie nights to the next level. Photo from the zolo.ca listing.

Want some drinks with that flick? There’s a bar and wine cellar on the lower level just for that, along with a party and games room in case, you know, you don’t want to hang out in any of the other rooms in your 7,300-square-foot house.

And if you do have guests over, not to worry — if they get lost trying to find the bathroom, they’ll eventually stumble upon one, given that there are nine total. 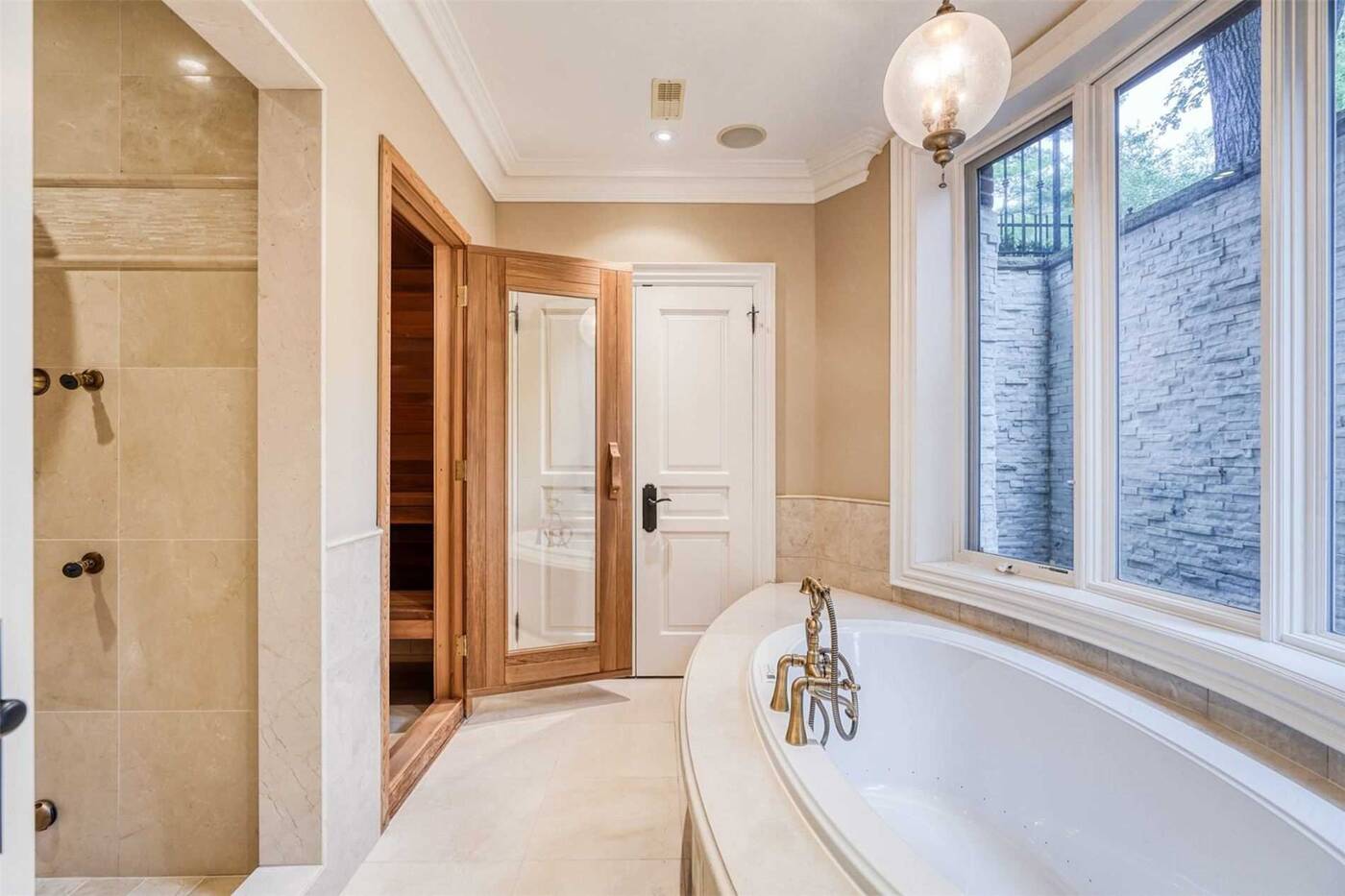 Sauna, anyone? Photo from the zolo.ca listing.

Luxurious details abound throughout the home, from ornate crown moldings to coffered ceilings, high-end applianes (a built-in coffee maker among them) to double-sided fireplaces, all open, airy and lit with natural light, potlights or bougie fixtures. 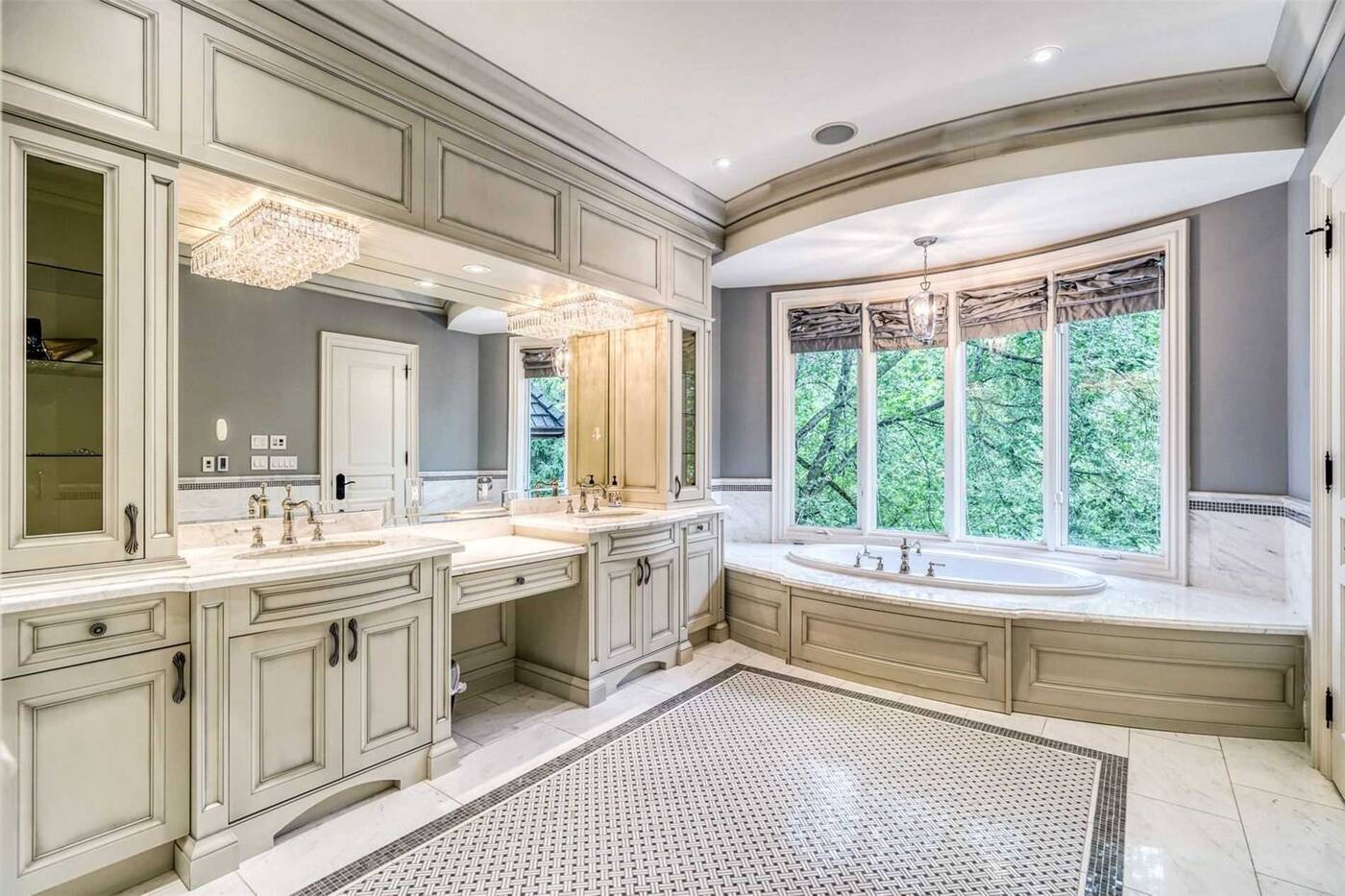 The home has nine bathrooms total, all of them opulent — this one has a tub with a view. Photo from the zolo.ca listing.

Whoever does acquire the home will need to cough up not just the exorbitant listing price, but also another $45,000 a year in property taxes alone, so it really depends on how much money you’re making in this dream home fantasy. 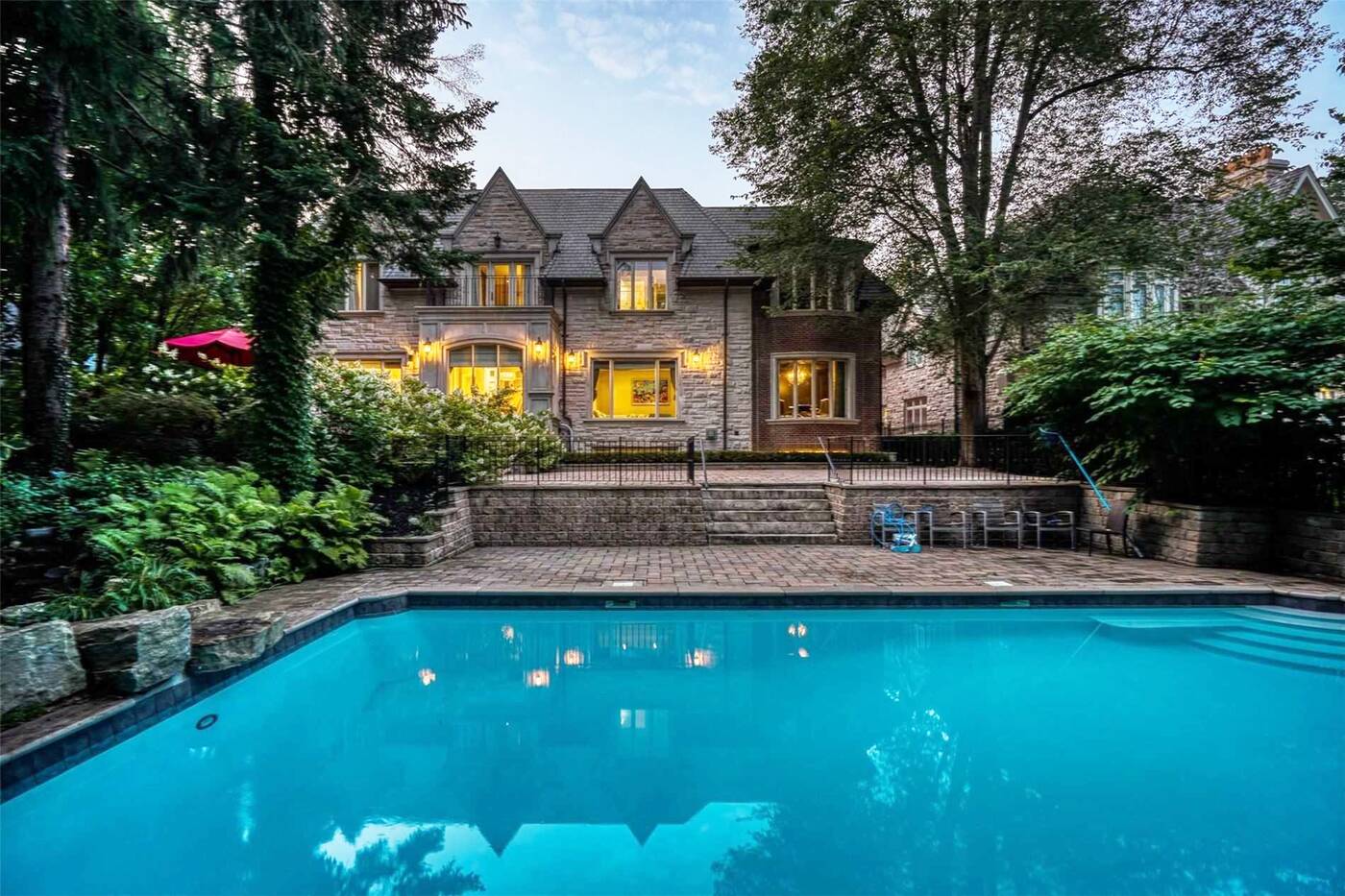 The private, treed backyard has an inground pool with water feature. Photo from the zolo.ca listing.

Though the home does feel fit for a celebrity with all of its ridiculous features, the finishings don’t feel as new or top-of-the-line as other similar listings, or as nice as someone like Drake’s house, which is just a few minutes’ drive away.

But if you have that many millions to throw around, who cares if it’s really worth it — the new owner will likely have enough cash to remodel and update it as they wish, anyways.