by Author
in Politics
Reading Time: 4 mins read
0 0
A A
0
1
SHARES
10
VIEWS
FacebookTwitterLinkedinRedditWhatsapp

Hundreds of people, some waiving Canadian flags, lined Wellington Street and the National War Memorial to cheer on Topp as he completed the final leg of his March to Freedom, which began in Vancouver in February.

There was a wall set up at the National War Memorial with “Thank you, truckers” notes posted that were written during the “Freedom Convoy” protest in downtown Ottawa back in February.

An emotional Topp walked up to the Tomb of the Unknown Soldier and bent down to one knee. The crowd chanted “Thank you” as Topp hugged supporters.

And across the street, a brief appearance by counter-protesters yelling “bullshit.” It’s met by (of course) chants of “freedom.” Their signs note various expressions of how over this #OttCity residents are. pic.twitter.com/qBb3uDzMcR

Hundreds of people greeted Topp across the city of Ottawa during the final day of his march, including Conservative Party leadership candidate Pierre Poilievre and People’s Party of Canada leader Maxime Bernier.

Poilievre marched with Topp for two kilometres along Baseline Road just after 12 p.m.  Poilievre spoke with Topp at College Square about the walk across Canada.

“I support freedom of choice; I always have and believe people should have the ability to decide for themselves on these matters,” Poilievre told Topp. “We should be free Canadians that can decide what we put in our bodies, decide what we think, decide who we are as people and restore the freedom that brought so many millions of immigrants to this country in the first place.”

“I think that he is advocating freedom of choice. People should have the freedom to make their own decisions with their own bodies and that’s why, I think, he’s walked across the country and that’s why I thought I would give him a greeting and give him a hearing and see if he has any thoughts to share with me,” Poilieve said. The Member of Parliament added Topp told him he doesn’t want to disrupt the capital over Canada Day. 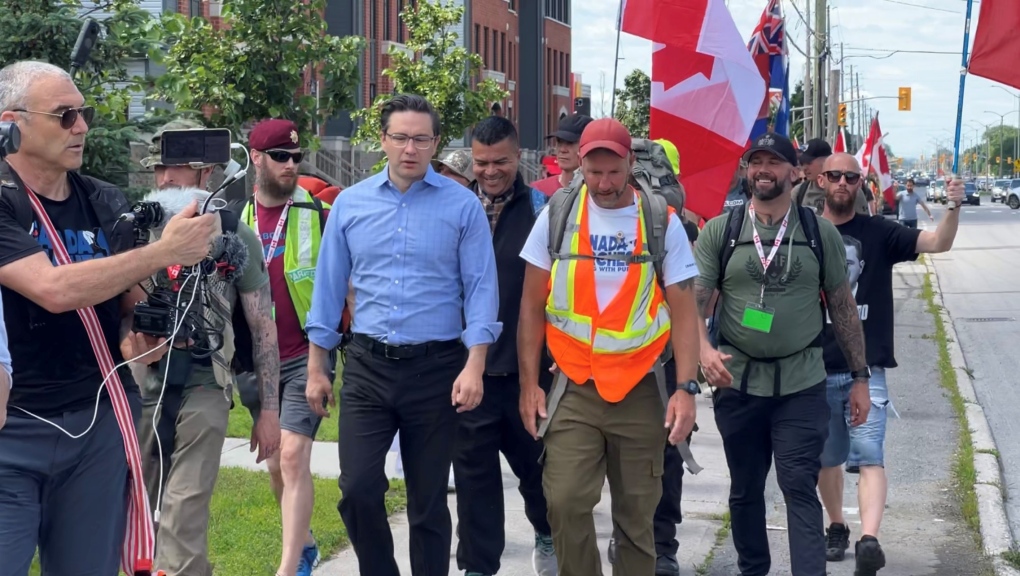 According to the Canada Marches website, Topp is marching for three reasons: Protesting federal government COVID-19 vaccine mandates, supporting Canadians who have been denied access to employment and services or who have lost income due to the mandate and on behalf of those who have been pressured into taking the vaccine.

“We rise to serve Canadians with honesty, respect and compassion, for the purpose of reuniting our people. We do this, with the intention of ensuring our government upholds the laws that support Canada’s Charter of Rights and Freedoms,” says the Canada Marches website.

Speaking on Parliament Hill last week, Topp said a number of groups that formed out of the Freedom Convoy had come together to protest the federal government.

“What I would like to see with the establishment of C3 – the Canadian Citizens Coalition is for us to have further conversations about the way forward, about the way of the future, of what we see Canada being and becoming,” said Topp.

Topp, a 28-year veteran of the Canadian Armed Forces, was charged by the Department of National Defence after publicly speaking out against federal vaccine requirements while in uniform.  Topp was charged with two counts of conduct to the prejudice of good order and discipline.

Topp arrived as police step up security in the parliamentary precinct and downtown Ottawa in preparation for possible protests over Canada Day. Officers in cruisers, on bicycles and on foot were patrolling a motor vehicle control zone, designed to stop vehicles participating in rallies in protests from driving near Parliament Hill.

“Freedom” groups are planning to hold a series of events and protests in Ottawa on Canada Day.

The groups Police on Guard for Thee, Veterans 4 Freedom and Freedom Fighters Canada are planning a “Freedom Family Picnic” in Strathcona Park on Friday.  Topp is scheduled to speak at the picnic.

According to the Twitter account “Live from the Shed” and the Freedom Fighters Canada website, other events planned for Canada Day include a “March to Freedom” starting from Parliament Hill at 3:30 p.m. and speeches, live music and DJs on Parliament Hill from 5 p.m. to 8 p.m.

Premier Doug Ford is calling on anyone attending the protests in Ottawa to respect the law.

“Folks, be considerate this weekend, you’re going to Ottawa, be considerate. It’s Canada Day, we’re Canadians, just everyone have a good time, a safe time, stay healthy and safe and spend time with your families,” Ford said.

Bernier greeted Topp in Bells Corners, and planned to walk the final leg of the journey with the veteran.

In a media release, Bernier said he would also press Poilievre to clarify his stance on COVID mandates.

“He stayed silent for two years, like all the other Conservative MPs,” Bernier said in a statement. “He was watching the polls and checking which way the wind was blowing, while I was holding rallies across the country and getting arrested. And then when it became safe he decided it was time to jump in at a carefully staged photo op during the convoy. He should stop lying about it.”

Much ofgermany’s success in recent decades can be put down to staying the course. Even its dramas were dramas of...

Russia’s invasion of Ukraine has eroded the nuclear taboo