Toronto’s real estate scene may be dominated by hulking concrete condo towers, but a developer is proposing to break the mould with a new plan to bring Canada’s tallest wooden tower to the heart of the city at 191 College Street.

And here’s the real kicker; instead of condos, developer Unix Housing wants to build hundreds of desperately-needed affordable rental units.

The site is currently occupied by a group of four three-storey “house-form” semi-detached buildings, with three commercial buildings on College Street, and two residential buildings on Henry Street.

A number of businesses occupying these addresses would be displaced by the proposal, including the Prenup Pub, Katachi Coffee Bar, and a Chatime location.

Though the businesses along College would be replaced, the exteriors of the houses are proposed to live on within the base of the approximately 21,300 square-metre, ICON Architects-designed building.

This would include roughly 1,380 square metres of retail space behind the retained frontages. 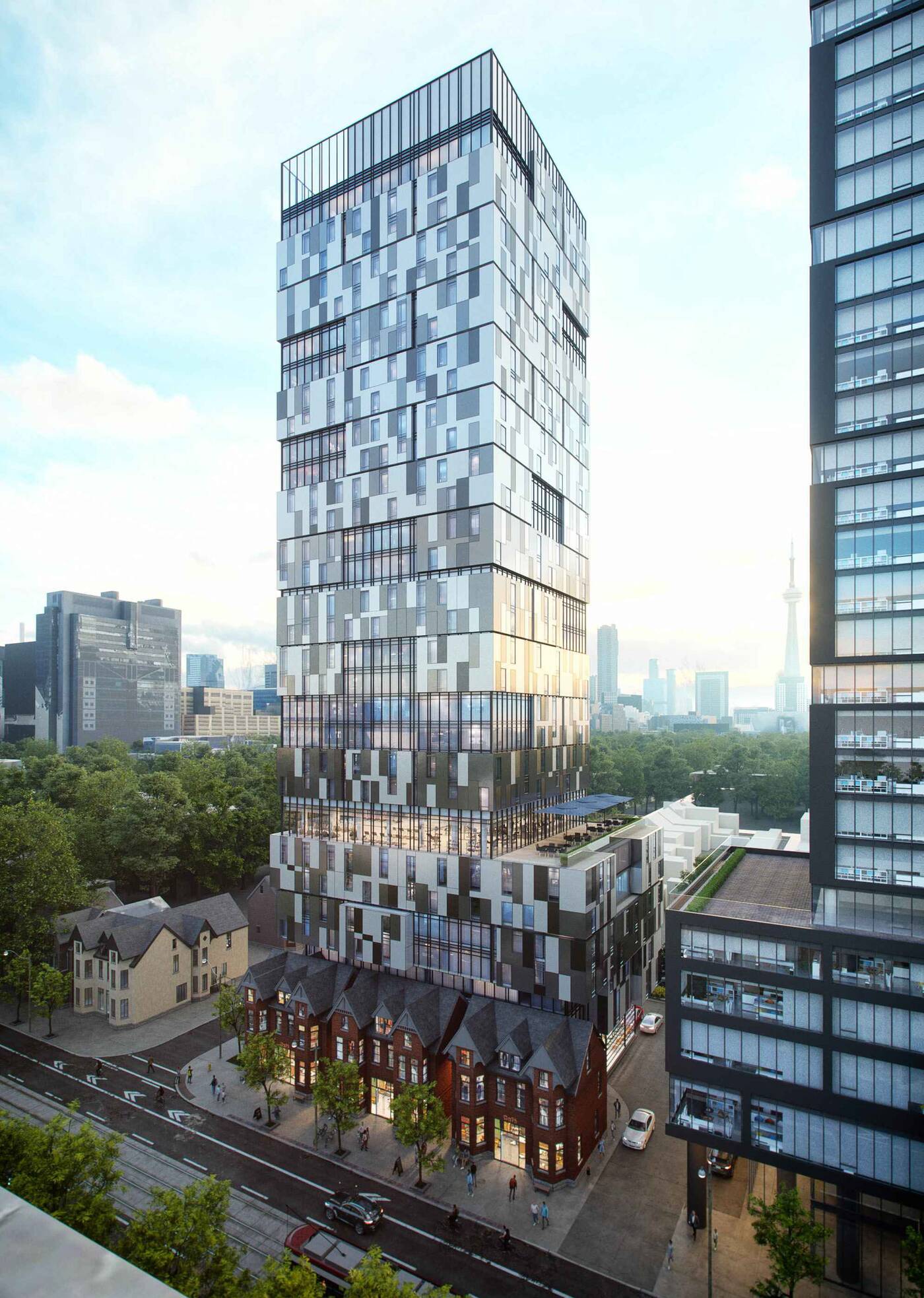 The majority of the floor area — at over 19,900 square meters — is proposed as residential space, with a total of 494 purpose-built residential rental units proposed throughout the building.

Out of the total unit count, 408 suites, or over 80 per cent of the total, will be provided and secured as affordable units for a minimum period of 40 years. The remaining units will be standard market rentals. 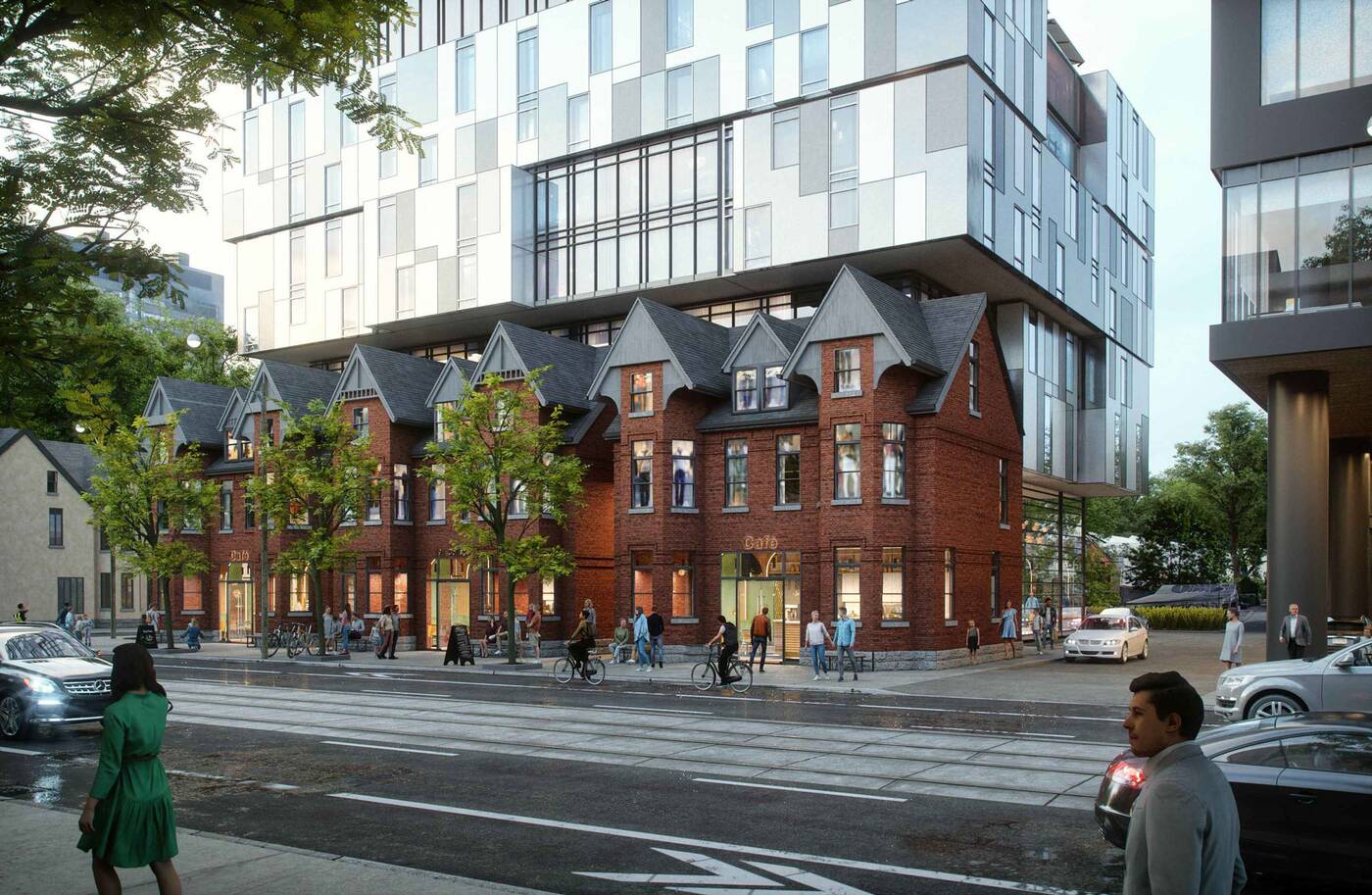 Looking southeast towards the base of 191 College Street. Rendering by ICON Architects.

This massive injection of affordable housing into the critically-low supply of units is being supported by non-capital incentives through the City’s 2021 Open Door program, which the developer applied for back in February.

In addition to the much-needed affordable housing, the project aims to set a new standard for high-rise wood construction in Canada.

If that isn’t green enough for you, the project is also exploring the use of geothermal heating/cooling to reduce emissions.

Its 31-storey height would dwarf Canada’s current tallest wood structure, Tallwood House, a student residence at the University of British Columbia that opened in 2017.

The 18-storey building was at the time the highest wood-frame building in the world, though it was surpassed in 2019 by the 85.4-metre Mjøstårnetm, in Brumunddal, Norway.

At approximately 90 metres, 191 College would bring the title of the world’s tallest wood building back to Canada. However, the title may not last long, as much taller wood structures have been proposed elsewhere in the world.

If you've managed to come up with the unfathomable amount that it takes to buy a home in Toronto lately (or really...

The average cost of a detached home in Toronto is closing in on $1.95 million, and it's not easy finding...

Missing woman may be in Brampton, Mississauga or elsewhere in Peel

Polio Detected in UK Sewage, Why Experts are Concerned 

Tourism Ireland Back In-Person with First Sales Mission Since 2020

Is Canada heading into a recession? Here is what you need to know.